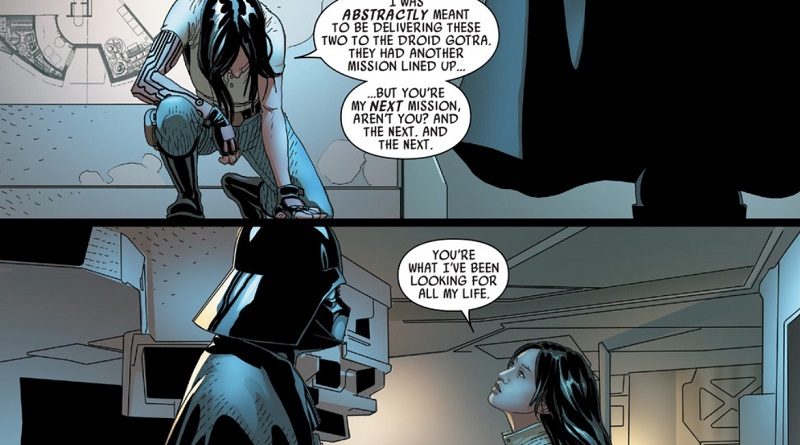 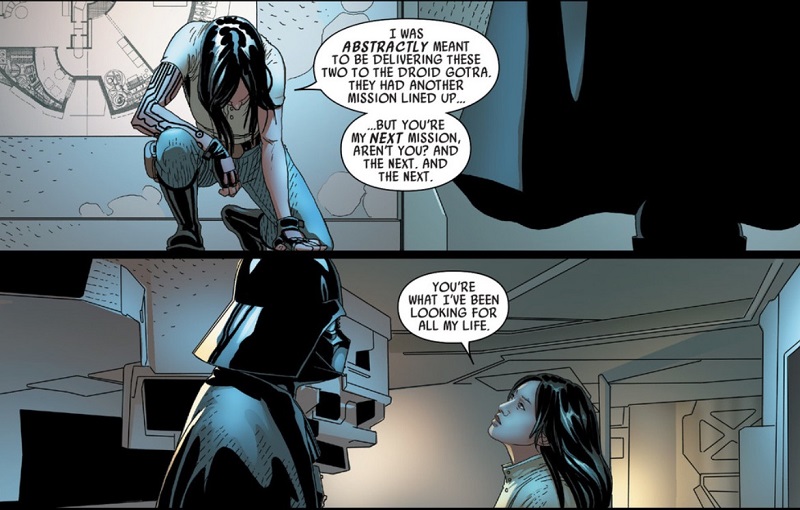 Orphaned by galactic war, a young girl pursued the only logical path in life: she became a rogue archaeologist with a penchant for hunting down the galaxy’s most dangerous forgotten weapons. Dr. Aphra made her first appearance in Darth Vader #3, written by Kieron Gillen with art by Salvador Larocca, and from the very beginning has quickly become one of the most adored new additions to the Star Wars franchise. Perhaps it’s Aphra’s genius with technology, much like Rey in The Force Awakens, or perhaps it’s her sense of fatalism wrapped around her obsession with resurrecting deadly weapons, which have made her immensely popular in comic reading circles. Through it all, she has worked as a servant to Darth Vader. Across the soon-to-be-completed 25 issue run of Darth Vader, as well appearances in a Princess Leia centric arc in Star Wars, Aphra has been fascinating and entertaining. 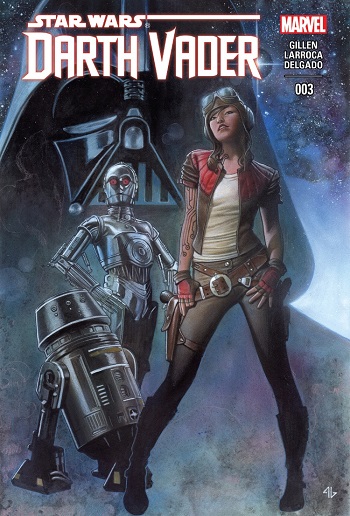 Dr. Aphra first appeared in the third issue of Darth Vader with an awesome nod to the character who inspired her creation, Indiana Jones.  In an interview with Comic Book Resources, Vader writer Gillen explained that his comic was already exploring the idea of ‘dark mirrors’ of existing characters. In Darth Vader, C-3PO’s analogue is Triple Zero, a protocol droid designed with the additional ability to torture and an unlimited interest in exterminating “organics.” Likewise, BT-1, an astromech-looking droid designed entirely to assassinate and destroy serves as the “Mirror, Mirror” counterpart to R2-D2. For Aphra, however, Gillen found the idea of an “ethically inverted Indiana Jones” an intriguing one. The pull of such a character not just won over Gillen, but resulted in Aphra’s introduction by way of stealing an invaluable piece of technology in an homage to the opening of Raiders of the Lost Ark. Unsurprisingly, given Aphra’s dark reflection of the good doctor, Aphra defends her theft not because the technology belongs in a museum, but because it belongs in an armory.

The reason behind Aphra’s fascination with weaponry is hinted at in Darth Vader #10 while she oversees an interrogation of a former Naboo official. The pages that cover the moment, set against a moonlit sky and mostly painted in shades of blues, reveal Aphra’s tragic past and offer an explanation why she doesn’t hesitate to take on the missions that Darth Vader assigns her. Abandoned by her father amid a galaxy-spanning war and taken to an unknown forested planet by a spiritual mother, Aphra somberly, albeit cynically at times, recounts how the absence of law and order resulted in the murder of her remaining parent. In the midst of the story is a young girl who discovers a cannon hidden in a cave which could have protected her mom. It’s unknown if a young Aphra did find a weapon hidden away like a lost artifact, but it’s definitely believable given her actions since. In the chaos of war she lost her family and developed an appreciation for the message of the Galactic Empire: order out of chaos.

For Aphra, it is clear that those lost weapons of the past are her own personal way to establish control over the chaos of the present. It also seems the deadlier the weapon, the more enticing the work to find and recover it. As such, when the unstoppable destructive force of nature that is the Dark Lord of the Sith promptly appears to request her services, Aphra is both a bit taken aback and a bit overwhelmed. Vader’s use of Aphra, and subsequently the two droids Triple Zero and BT-1, arises from the Sith Lord’s quest to discover whether Anakin Skywalker had a son with Padmé Amidala. It was her expertise with droids that drew him to her, and a need to keep such inquiries under the table. 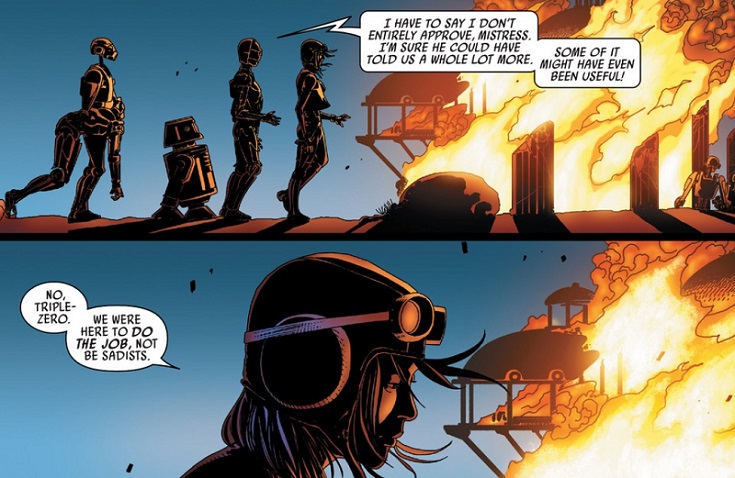 Aphra’s conscription is a tense introductory moment, in which Aphra praises Darth Vader’s mission as the servant of the Emperor but also recognizes that once within Vader’s sights, her life expectancy runs hand in hand with her value to him. Thankfully for Aphra, and the readers, she proves increasingly valuable, be it uncovering information that Padmé did indeed have a child before her death or organizing bounty hunters into a major currency heist to help fund Vader’s shadow operations. Aphra’s success extends her life, but it also increases her own knowledge of the Sith Lord’s activities. This knowledge makes her a liability, one which Vader is prepared to silence after Princess Leia captures Aphra with a knockout-inducing haymaker in the final installment of the cross-over storyline, “Vader Down.” As a prisoner, she becomes both invaluable to the Rebel Alliance and a target in need of silencing for the terrifying Vader.

The “Rebel Jail” arc of Marvel’s Star Wars is not just a celebration of women literally overcoming a man’s attempt to force behavior upon them, but also allows a glimpse of Aphra beyond the confines of Vader’s oversight. In the context of “Rebel Jail,” Aphra is escorted to a top secret rebel prison by Princess Leia and Sana Starros. The jail is subsequently attacked by killer droids and a former rebel spy intent on forcing Leia to accept a more ruthless strategy in dealing with the Empire. In order to motivate the future Resistance general, the spy releases the Imperial prisoners while also ordering his droids to kill them, and Leia, if she did not comply by also executing the prisoners. Surrounded on all sides, Leia recruits Aphra to help her and Sana best the spy at his own game. Aphra handily reprograms one droid to turn on its brethren, but also picks up a blaster to join Leia and Sana in fighting their way to their enemy. In the process, the rogue archaeologist is revealed to be both glib and deadly, emerging as a fine example of an anti-hero. As a consequence of her help, Aphra is freed, but only to be placed in jeopardy of Vader’s agents sent to silence his liability.

Aphra’s final story arc leading up to and through the penultimate issue of Darth Vader is one of survival of her own creations, Triple Zero and BT-1, and then finding herself aboard the Super Star Destroyer Executor while under attack by Vader’s nemesis, Dr. Cylo. In the midst of the attack, she finds a way to help safeguard the Emperor from his own traitorous creation Cylo and is poised to undoubtedly make one last attempt to save her life by the issue’s conclusion. Dr. Aphra’s continued existence in the Star Wars universe is by no means secured, despite major fan support and the unique and downright coolness of her character. As a tech genius, an Indiana Jones who would definitely side with the Nazis’ goal in Raiders (put that Ark to use!), and as an extraordinary female character, it would be a shame if the story of the amazing Dr. Aphra came to a tragic conclusion. 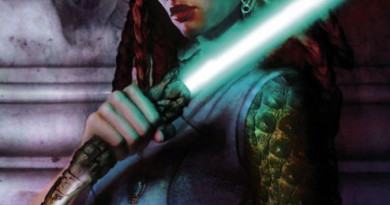 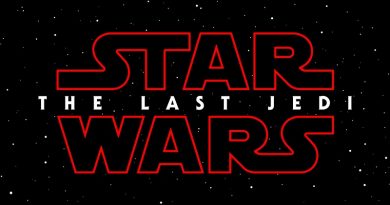 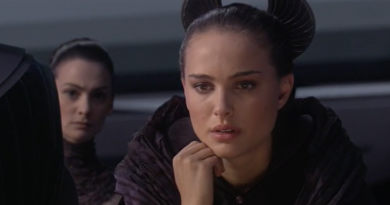 One thought on “Dr. Aphra in the Marvel Comics”