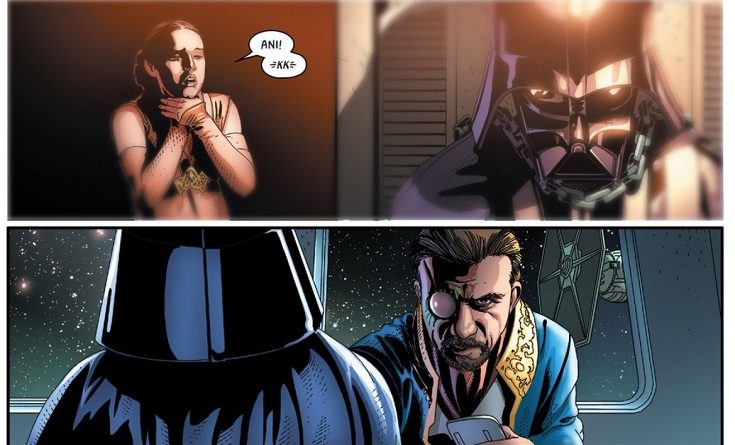 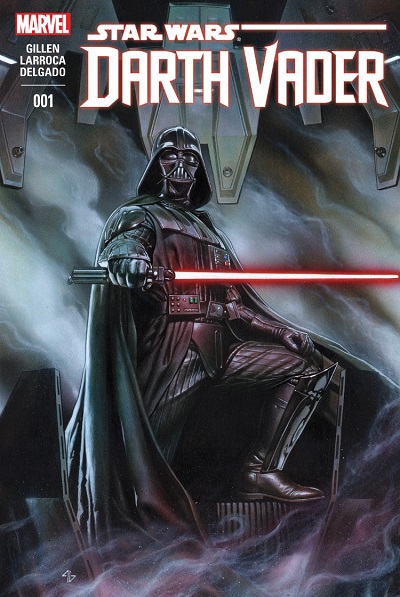 The ending of A New Hope is one which indirectly promises more to the viewer. When it debuted in 1977, there was no guarantee that a decade-spanning franchise called Star Wars would sweep the imaginations of millions of fans across the surface of the globe. Yet the ending of the film, despite the grand medal ceremony that precedes the rolling of the credits, was far from tied up in a bow. Moments after Han Solo and the Millennium Falcon burst out of the light of a nearby star to save Luke Skywalker from the impending doom about to burst from Darth Vader’s TIE fighter’s cannons, Vader’s TIE was knocked out of the trench by a wingman and sent spiraling out into space. It could have been the last of Vader, the sinister villain doomed to tumble end over end to his death – but George Lucas offered one final shot of the Lord of the Sith righting his TIE Advanced and flying away. Lucas bestowed on the viewer a promise that Vader would return.

Written by Kieron Gillen with art by Salvador Larroca, Darth Vader doesn’t simply offer the reader a story of Vader from the loss of the Death Star to the yellow crawl of The Empire Strikes Back. It peels back Vader’s mask to delve into the monster who was once Anakin Skywalker, and simultaneously intertwines the past of the prequel trilogy with the present time of the original trilogy. The secret to Darth Vader’s success – and the series’ run has been a resounding success for Marvel – is Gillen’s grasp of not over-explaining who Darth Vader is and what his motivations are. In tandem with Larroca’s masterful pen, the series appreciates when a simple image, the comic book’s equivalent of a silent scene, is just as or more effective than dialogue. Darth Vader, when best written, is an angry force of nature, never predictable and rarely passing without devastation in his wake. It’s these two traits which follow Gillen’s Vader through the title’s run. 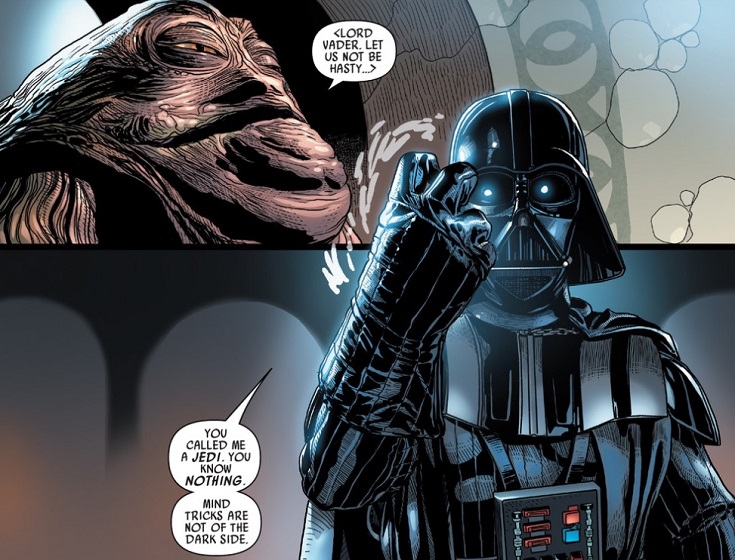 Darth Vader begins not long after the destruction of the Death Star with an Emperor Palpatine furious at the loss of nearly twenty years of careful planning. To say Vader is in the Imperial doghouse would be to put it mildly, as he is sent on a second-rate mission to obtain shipping help from Jabba the Hutt. This opportunity launches one of the parallel storylines of the title: the beginning of Vader’s obsession with the X-wing pilot who destroyed the Death Star. While on Tatooine, Vader hires bounty hunters to find him the pilot. While they fail to do so, they do bring him the name “Skywalker.” It’s taken as a given that Skywalker is not the “Smith” equivalent of the Star Wars universe, and driven by this information the Lord of the Sith seeks out an operative to act in the shadows, away from the sight of his master.

This introduces one of the franchises’ best new characters, Dr. Aphra, a rogue archeologist, wunderkind of dangerous droids and weapons, and big fan of Vader. For a more in-depth look at Aphra, check out our recent article on the amoral doctor. She becomes the vehicle which drives the Skywalker storyline.

Aphra is joined by two new droids: Triple Zero, a black protocol droid with a creepy fascination for torturing and killing humans, and BT-1, an astromech armed with as much weaponry as a small army. Teamed together, the trio launch operations which take them from Naboo to speak with the mortician who worked on Padmé Amidala’s body to Geonosis to steal a droid army to act at Vader’s beck and call. Many of Darth Vader’s most pleasurable moments involve Aphra and the two droids, in part because of the complexity of Aphra’s character and in part because Triple Zero and BT-1 represent a gleefully morbid evil mirror to the most famous droid duo, C-3PO and R2-D2. Yet they only represent half of the important cast of characters who sustain the multiple arcs of the series. 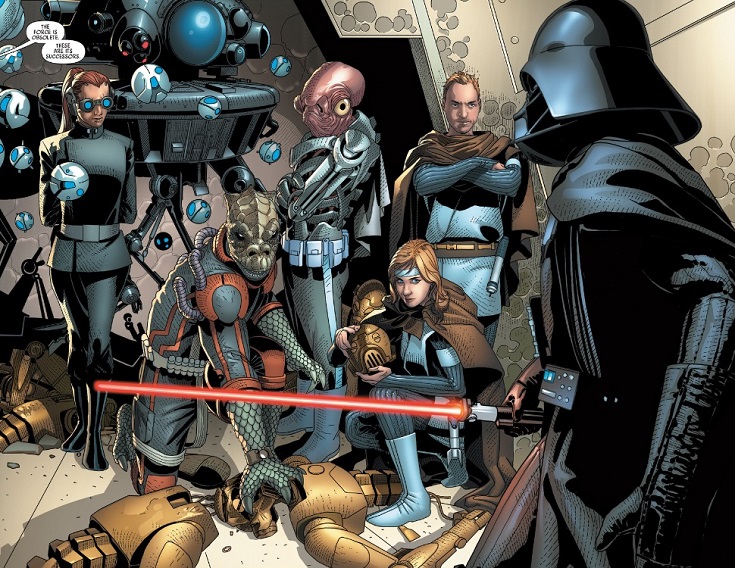 The other half belongs to Dr. Cylo, a cyborg and genius credited with saving Anakin Skywalker by imprisoning him in his iconic mechanical suit. Under Palpatine’s encouraging eye, Cylo created a handful of modified humans and aliens, designed intently with the goal of replacing the outdated Darth Vader through science and technology. By far Cylo is the most fascinating of the group, as his creations mostly fail to manifest much more than cocky condescending attitudes toward Vader based on their self-perceived superiority. For the most part, Cylo’s small army of lightsaber wielding Vader replacements exists as periodic barriers for the Sith Lord to overcome, continual punctuations in the argument that science can overcome the power of the Force, a question that to a degree was answered previously by a farm boy in an X-wing. As Vader stated, “Don’t be too proud of this technological terror you’ve constructed.”

How Darth Vader navigates between his secret desire to uncover the truth of Luke Skywalker while dealing with Dr. Cylo’s competition is one of the joys of Darth Vader. In his words and actions, we can see the Vader of The Empire Strikes Back slowly emerging, willing to do whatever it takes to accomplish his goals. It’s in Empire that Vader peaks as the villain, not yet referred to as someone redeemable by his son, nor sidelined by more authoritative figures like Tarkin or Palpatine in the first and third installments of the original trilogy. As a result, Gillen’s decision to write Vader from this perspective is wildly successful. It’s the Vader fans know and love best. Fearlessly Gillen makes an equally successful bid to help explain how this Vader evolved.

Across the series, Gillen drops moments of insight into Vader’s character, each time nudging it forward to one final incredible moment in the penultimate issue of the series. The series begins with Vader ruthlessly slaughtering a village of Tusken Raiders while on Tatooine, an act which directly ties into Anakin in Attack of the Clones. It culminates with Vader mentally confronting his own identity as Darth Vader versus the person whom he once was, Anakin Skywalker, by figuratively destroying those whom Anakin had attachments to, such as Padmé and Kenobi. Yet at the moment when Darth Vader destroys Anakin Skywalker’s attachments to his old life, he fails to destroy the abstract idea of the son he has only recently discovered. It simultaneously completes the journey of Darth Vader’s character begun in Revenge of the Sith and lays out the groundwork for the opening through which Luke Skywalker will one day succeed in saving his father. It’s this insight into Darth Vader by Gillen which helps make Darth Vader such a powerful story of the character. 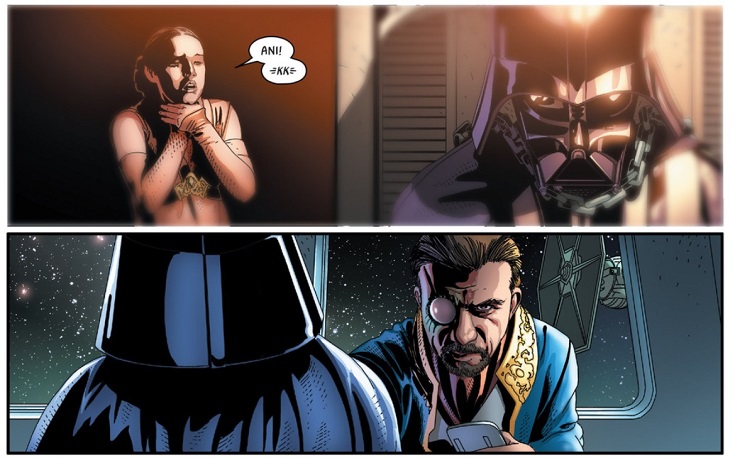 The final issue of Darth Vader was published on October 12, 2016, and in December, 2016, will be included in the final bound volume of four which collect the series’ issues into perfect encapsulations of the main storylines. Volume One establishes Vader’s situation following the Death Star loss, Volume Two introduces Dr. Aphra and her quest to uncover Skywalker’s identity, while Volume Three continues the quest while swerving into a war that had its origins in Darth Vader Annual #1. A crossover event with Marvel’s main Star Wars title, Vader Down, separates several issues from the Darth Vader run, but thankfully, those, too, are bound and available for purchase as a complete story arc. For anyone who is a fan of the Dark Lord of the Sith, Darth Vader is a must read as a reflection of the character that now stands astride two cinematic trilogies. When Darth Vader steadied his TIE fighter at the end of A New Hope, it telegraphed that Darth Vader’s story was not done, and now with Marvel’s Darth Vader, the story continues as a superb bridge from one film to the next. 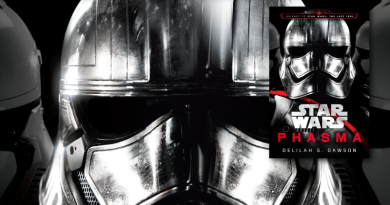 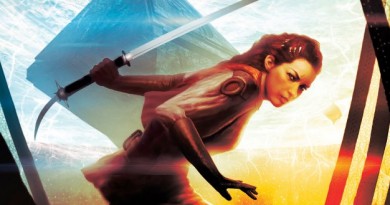