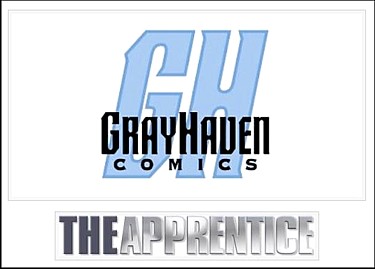 Founding FANgirl Tricia Barr and I have known each other for more than a decade. Something that you might not know about our fearless blogger is just how steadfast she tends to be in supporting friends and acquaintances. Forever burdened with an impossible schedule of her own, Tricia always finds time to give an intuitive boost to those who need it.

In my case, that usually consists of a well-timed, long-distance kick in the butt.

Not once did the idea of creating comics set off a ping on my radar. I enjoy comics. I draw and paint. I have published short fiction. But putting those things together never entered my mind.

Tricia, on the other hand, is always thinking about possibilities.

When I decided to attend GeekGirlCon in August 2012, Tricia asked me to interview GrayHaven Comics writer and editor, Erica Heflin. I had never interviewed anyone for the blog and was sure that she had lost her mind. Trapped by legendary Barr persistence, I was pale, perspiring, and terrified when I met with Erica, yet somehow our “short chat” became an hour of great conversation. But back at the GrayHaven booth, I was handed a flyer advertising the publisher’s Open Submissions period, and that’s when I became suspicious.

Tricia Barr was orchestrating more than just an interview for her blog. When I confronted her, she admitted to the possibility of “some collusion” between her and the great people at GrayHaven. She told me that she “might have mentioned me to them.” I recall giving her a bit of a hard time about it, but then I let the subject go.

Fast-forward to January 2013. Touched by a special call for anti-bullying stories, six weeks earlier I had rashly pitched a concept to GrayHaven’s anthology, “You Are Not Alone,” and found myself staring at an acceptance message. Tricia Barr’s idea had taken root and now I had promised to create something with no clue about the process. I struggled with how to write a script, the illustration parameters, and lack of confidence, but I wrote and illustrated my first comic story. That book is being printed right now and I can’t wait to see it – warts and all.

In June of this year, I made another reckless choice. Publisher Andrew Goletz sent one last Tweet advertising the inaugural “GrayHaven Comics Apprentice” competition. That last-call message happened to be the first I had heard of the game, but having watched Donald Trump’s Celebrity Apprentice, and perhaps having latent masochistic tendencies, I barely hesitated to
Tweet as a volunteer.

Within seconds I wished for a WORMHOLE key on my computer, the function of which would take me back thirty seconds in time so that I could click DELETE instead of SEND. Even if it changed the universal timeline, it would have been worth it, and who would have been the wiser?

Instead, I received a message of congratulations. I was one of eighteen Apprentice contestants.

That split-second Tweet turned the next two months of my life upside down. Apprentice was a grueling, intense, sometimes cut-throat, introduction to the comics industry – and a priceless education. To this day, I can recite – verbatim – a number of the judges’ constructive criticisms. Those wise assessments have been logged into my internal editor; their standards applied to my work on a regular basis. Although I continue to struggle with consistency, the judges’ feedback on my Apprentice contributions has without a doubt helped me to improve my writing.

Only two women were part of the original eighteen. The other female player exited the game early on, leaving me with the self-imposed burden of representing women in a contestant pool of experienced and knowledgeable fanboys. I raised my expectations from “not being fired in the first two weeks” to “making the Top Ten,” or in my dreams, “Top Five.”

I gained confidence with every week that I completed increasingly difficult assignments and remained in the game. We were asked to create reboots of established comics, write original concept pitches, collaborate with diverse teams of contestants, and work individually. Every week built upon the last as players did their best to convince the judges that we were all capable of writing a good comic.

Male contestants that I thought could easily out-comic me dropped out due to difficulties with juggling Apprentice and real life, or were fired in the Boardroom. After success with my individual work, I became part of an excellent team that performed extremely well. I contributed to story ideas that my colleagues liked and the judges enjoyed. Fair criticisms were leveled when deserved, and we all learned.

With little time to prepare, I had succeeded at tasks that I would have avoided like a Sith army in real life. During “Marketing Week,” I beat the heck out of social media, abused friends and contacts, begged strangers for help, and stretched so far outside of my comfort zone that I became unrecognizable even to myself. My teammates did the same, and we won that week by a landslide.

After a tough challenge in September I was forced to defend my work as one of the “bottom three.” When I survived the judges’ Boardroom challenge, I looked around… and saw only four other contestants in the game.

I was in the Top Five.

This fangirl’s goal was achieved.

But that was also the week when I began to mentally and physically wear out. It was a lot more difficult to respond to the next challenge. The quality of my work deteriorated and with so few of us left, submissions of a lower standard stood out next to the rest. It was my time to go.

With my playing days abruptly over, I stared at the blank monitor. No new challenges for me. After so many weeks, it felt very strange.

Still, I was the fifth-best Apprentice candidate this year. I’m proud of that.

I exceeded my original expectations by a country mile, because despite many misgivings, I kept feeling Tricia Barr’s boot on my rear end. Keep going, I thought, and encouraged by friends, my teammates, and the judging panel, I did.

And to be clear, not once was I treated differently from any of the fanboys. The level of mutual respect among everyone involved was extremely high. Although this experience was not diminished by such things, sexism and harassment are out there. If you meet anyone so inclined I have some advice for you: tell them off, “out” them, hang warning signs around their necks, and find someone better to work with.

Through Apprentice, I realized many things:

The Comics Apprentice experience changed me.

Two days ago, I received messages that both of my story pitches for GrayHaven’s 2014 publications are accepted. Had I not participated in Apprentice, I doubt that I would have sent those ideas in for consideration. Greater confidence was by far the most important take-away from the competition.

After the game ended, I received very kind encouragement from GrayHaven folks urging me to come back and try the competition again. I haven’t completely ruled out that possibility.

Of course, for me there is always one wild card: Tricia Barr doesn’t give up. Once she sets a course she wants to see potential reached.

I’ve noticed she likes to wear boots a lot.

There are definite rumors that GrayHaven will be staging Comics Apprentice II next year. Fellow fangirls, there is not a better learning opportunity in the comics universe. 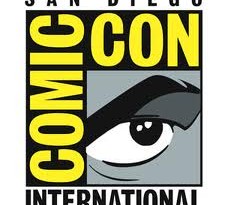 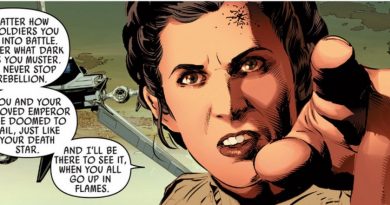