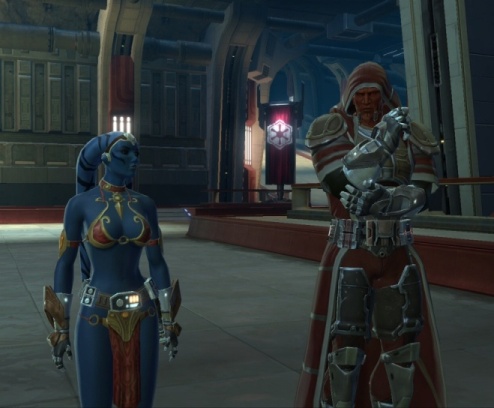 Admin Note: It’s been a while since the last entry in Linda’s Diary of her Star Wars: The Old Republic MMO experience, but rest assured she’s still playing. Today she returns with Part Five in the series. If you need to catch up, be sure not to miss Parts One, Two, Three, and Four.

Nearly a year ago, I read Revan and became intrigued enough to start playing Bioware’s Star Wars: The Old Republic MMO when it came out. The immersive game has insidiously crept into my daily life, and it’s made for some interesting changes in our house.

The Padawan is now a whole grade higher in school. Picking her up after the first day of fifth grade, I worried if I’d still rate a hug. “You smell like Tython,” she said, squeezing me. Relief. Then, “Tython?” She nodded happily. “Like the Gnarls,” she explained before launching into a story about her day. Tython’s Gnarls are the woods on the Jedi Academy’s new home planet. Young Jedi do their early training there, before earning lightsabers. Belatedly, I realize Tython smells like Bottega Veneta, my body lotion – a leathery floral chypre. It’s a sign just how integrated TOR has become in our home.

After a few minor skirmishes over the shiny black Dell desktop, some sulking – all Hubs’, of course – and a significantly diminished Bloomingdale’s bill, a hefty but sleek Alienware laptop now sits in the office. Not only has it returned familial harmony, it’s even better speced for gaming than the Dell. The Alien’s keyboard is backlit in purple as if it’s from a gentlemen’s club on Nar Shaddaa. The Alien is Hubs’ computer, so he can now run through the game with me or the Padawan and no one is left pouting.

Although I still keep in touch with my gaming buddy DJ, my first Guild disbands. I join a second Guild on a different server. We’re mostly professionals, many of us are parents, and there is a good dose of women as well – we’re the skew in the MMO demographics. With the Padawan’s help, I’ve rolled a new Jedi Knight: Skyl’n, a blue Twi’lek. She still looks like me – if I were blue, had lekkus, worked out every day, and never ate carbs.

With more experience, it’s much easier to level up Skyl’n. So far the characters I’ve played have been DPS because it seems a little easier. Now I’m up for trying something new. I roll Skyl’n as a Tank, the one who leads the charge. When I reach the 30’s – the max level is 50 – leveling gets harder. I’m motivated to keep going because at level 42, I gain Lord Scourge as a companion. He’s my favorite character from Revan.

I reach out to the Guild for help. Like my riding trainer, one of my guildmates observes me fighting, analyzing what I’m doing wrong and what I’m doing right. He tweaks Skyl’n’s rotations – the optimal combination of keystrokes to attack your opponents. He’s written our Guild’s manual on tanking, so I improve significantly. Another Guildie takes me to Fleet and shows me how to max out my armor and use commendations to purchase augments, which increase my character’s main attributes of strength, power, and endurance. He gifts me with 50,000 credits and admonishes me to pay it forward. Other Guild members go through flashpoints with me, coaching me through group play. I’m no master, but I slowly get better at tanking. I like all the Guildies I’ve met, but I develop a core group I play with, mostly because we are all awake at the same time and seem to share a similar, if slightly warped, sense of humor. I even go from typing in Guild chat to wearing a headset and chatting online.

Bioware consolidates servers and the planets get more populated, which makes people-watching and scrolling through General Chat entertaining. Joining a group of random strangers to do heroics – called pick-up groups, or PUGs – can be an easy and fun way, or a ridiculous and crazy way, to finish a mission. It certainly adds to the adventure.

Besides your character’s storylines, there are many other adventures – the flashpoints, heroics, space battles on your ship, and side missions on every planet. I discover questing for ancient datacrons. After you get one of these artifacts, your stats get boosted permanently; which stats depends on the datacron. They range from easy to nearly impossible. Some of the difficult ones are on Tatooine, involving, for example, parkour or 45-minute balloon rides. Yes, there are hot air balloons on Tatooine. 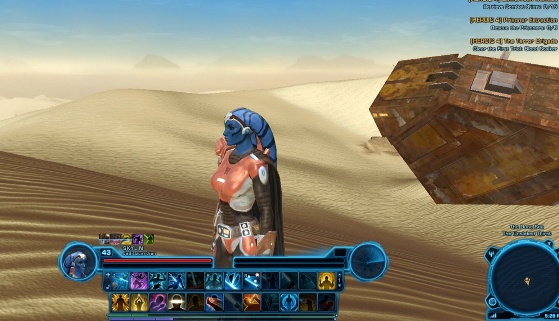 So when Rugo Darmic, a Jedi Consular who looks like young Obi-Wan, offers to help anyone grab a datacron, I go. Rugo is standing on top of a broken sandcrawler in the Dune Sea, dancing. I’m playing alone downstairs in the office, club music on to keep me company. Rugo uses one of the Jedi Consular skills, Rescue, to pull me to the top of the sandcrawler. The sensation of flying up is breath-taking. Now all I need to do is jump down to a nook and grab the datacron. The game graphics are so good that looking down gives me vertigo. I leap and miss. Rugo pulls me up again. A fellow Guild member tries to guide me from below, help me line up the nook. Standing on the ledge makes me dizzy. I hit the space bar to jump. I miss again. After the sixty-second delay, Rugo pulls me up again. Embarrassingly, I miss again. “Did you take the Sprint function off?” Rugo asks politely. Maybe I should try opening my eyes.

It’s two in the morning, but I wake up Hubs. I babble at him about datacrons and sandcrawlers. He must see the crazed look I have because he comes downstairs to the computer. Bleary eyed, he leaps. Perfect landing. The datacron is mine. Hubs returns to bed, muttering.

“Pull me up again,” I ask Rugo, “please?” He obliges. The vista of Tatooine is spectacular. The cliffs are hazy purple in the distance. Even our shadows below look real. Rugo and I dance a victory dance on the sandcrawler to Nicki Minaj’s “Starships.” It’s one of my favorite SWTOR moments.

Later, I ask Rugo what inspired him to do this – he replies that he just wanted to help others in the game, the way others have helped him. There’s a lot of that in The Old Republic.

There’s so much I love about SWTOR. The detailed graphics are amazing. Tatooine, though one of my least favorite planets, is impressive. In the Sand People tents there is tribal art reminiscent of Lascaux. Other places are equally vivid. Running through a Hutt owned cantina on Nar Shaddaa, I pause to look down. Even rugs have intricate patterns, and this is only an antechamber. The ads on the billboards on the Fleet change, just like Blade Runner. On Taral V, there are waterfalls that are as crisp and clear as any in Kauai. Out on the icy plains of Hoth, there is soft, slightly eerie music that mirrors cold winds and empty expanses. 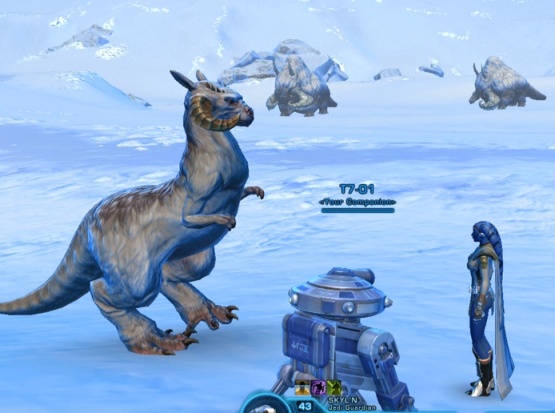 A year ago, a fall off my horse resulted in a couple of broken ribs and other injuries with a prolonged course in physical therapy. In addition to missing the rush of riding, I miss the camaraderie of the barn. The Guild – and the game – fills some of that space.

In Guild chat, we talk game mechanics, Star Wars lore, and juicy Guild gossip. But it’s more – we share parenting tips, work stories, and encourage each other’s goals. When Hubs, Padawan, and I fly out to New York for a wedding, we have lunch with Taita – who is a Korean software engineer, a Gulf War vet, a WoW aficionado, and married to a Russian émigré and galleried artist. They also happen to be International Latin Dance champions. They are so cool, and so nice, that only Neil Stephenson could have made them up.

I’ve realized that it’s a fallacy – friends “in game” are not so different than friends “in real life.” Both sets I keep in touch with by email, text, or phone calls. Only the dates we set up are different in location – out for dinner in a restaurant versus meet up at the Fleet cantina.

Playing with a varied group of people broadened my social circle. The guys at my regular Starbucks are gamers and Star Wars fans. I’m happy for the manager when he moves on to a dream job of game testing at EA. At the New York wedding, I meet a game developer. We talk about my old job at Sega and the future of gaming. Even at my dojo, we do a Star Wars camp where the kids use swim noodles for double-bladed lightsabers. It sells out. Padawan convinces her teacher to do a Star Wars Reads Day.

On the downside, I tend to get the gleam of the freshly converted. While my proselytizing convinces my brother and a few friends to join the game, I’m fairly certain my enthusiasm has scared a few others.

“Mommy,” she says urgently, “The Old Republic is now in LEGOs!” What? This gets my attention. We snap up the Malgus and Satele sets. Not on my shopping list, but when your favorite characters have been made into LEGOs, they really are canon.

While I’m upgrading my headset, the sales guy at Best Buy blurts, “You don’t look like a PC Gamer.” I’m no longer sure what a gamer looks like, and I’m on my way home from work. I’m wearing pumps, pencil skirt, pullover, and pearls. 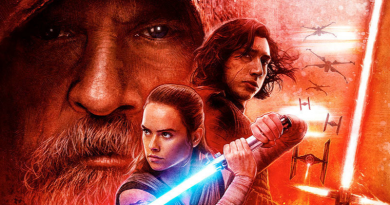 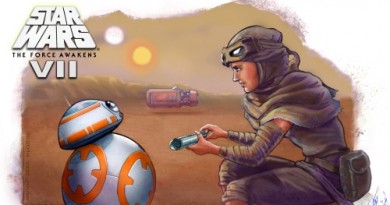