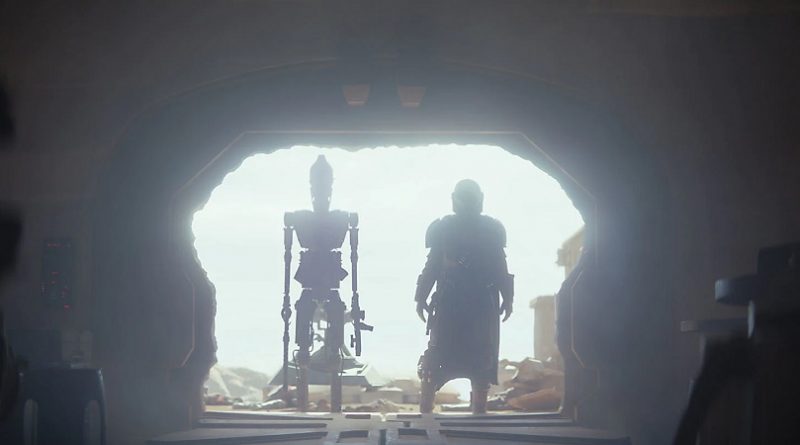 Two individuals are responsible for establishing the story in The Mandalorian: Pedro Pascal, acting with everything but his face, and Ludwig Göransson, whose “space flute” score establishes the foundation for creator Jon Favreau’s live action Star Wars series. For Pascal, by invoking the Man with No Name character made famous by Clint Eastwood, he assumes the burden of being Boba Fett without being Boba Fett. (The original Fett actor, Jeremy Bullock, adopted Eastwood’s performance to inspire his own). In this Pascal succeeds, more so by the end of the first episode where his voice projects the character beyond the armor. As for Göransson, his score kicks in as the Mandalorian enters a snow-bound cantina and there’s no doubt that we are watching a space western, as music influenced by famed composer Ennio Morricone saunters in with an Italian flavored recorder. The line between television and film is no more pronounced than with his music, which in the vein of Kevin Kiner, composer for previous Star Wars television projects (The Clone Wars, Rebels) separates the genre away from the neo-romantic cinematic work of John Williams. This is a good thing, and throughout the first two episodes, Göransson’s music, like Williams’ scoring, becomes an invisible character that breathes life into Favreau’s creation.

The first episode of The Mandalorian is our introduction to the character. He’s a bounty hunter, a very good one at that, and working hard in a life after the fall of the Galactic Empire, only four years since the Battle of Jakku (or for those sticking to just the movies, five years after Return of the Jedi).  The New Republic is absent in the backwater worlds we find the Mandalorian living and working in, with not even its own currency present when it comes time for the Mandalorian to collect on his bounties. Even less scarce than Republic credits are quality bounties, which leads the Mandalorian to accept an off-the-books job from the Carl Weather’s well played Greef Karga, the bounty hunter guild’s job man. The mysterious bounty leads him to Werner Herzog’s The Client, an unnamed former Imperial still commanding at least a handful of worn out looking stormtroopers. Herzog’s character is intriguing, and comes across as a pragmatist whose motives are obscure and whose desire, a bounty, is offered to be paid with beskar steel, a metal precious to Mandalorians for their armor.

The Mandalorian takes the job, as well as a small down payment of the rare metal, and quickly heads to an inconspicuous alley with an inconspicuous door. Behind it reside a number of fellow helmeted Mandalorians, even children running about. Here we meet the Armorer, played by Emily Swallow. The character is one part Mandalorian and one part fictional Viking, with small horns poking from her perquisite helm and fur of some sort adorning her shoulders. This allows the episode to be introductory not only for our titular character, but also his people. The Armorer works within a forge which appears as sacrosanct as an altar, offering a hint of how important the Mandalorians hold their armor. While the Armorer takes the small sample of beskar steel to craft a pauldron, we learn that his efforts help support “foundlings,” the orphans within the Mandalorian society. We learn that he, too, was a foundling, and are offered quick flashbacks to a child, presumably the Mandalorian, as his family is under attack and his parents hide him away for his safety. This reveals one reason why he is in the process of having armor made, as Mandalorians pass their armor down, generation by generation; and in this case, his family, if they had armor, has perished.

We also learn that at some point the Empire conducted a purge of the wider Mandalorian community.  While quite a lot was written about the Mandalorians in the Legends universe, not a lot has been conveyed in the new canon outside of Dave Filoni’s The Clone Wars and Rebels animated series. Rebels, which took place approximately ten years earlier, only touched upon the Imperial efforts to contain the Mandalorians. In that story, the Empire had dethroned the rightful ruler of Mandalore, Bo-Katan Kryze, and installed a puppet governor, who was defeated in Season Four. Presumably, the purge of Mandalore followed when the Mandalorians sought to rebel against Imperial might. Perhaps it left the Mandalorians a wandering tribe, how Armorer refers them to; earlier works had used house or clan as the nomenclature. But in this introduction, to the Mandalorian and to the Mandalorians, we begin to learn who our protagonist is and his motivations, which will be important going forward in the current story arc.

That arc, the bounty for the Client, takes the Mandalorian to a desert planet where he ends up befriending an Ugnaught, voiced by Nick Nolte, named Kuiil, who helps him tame a blurrg mount and leads him to a compound where his bounty awaits. The Mandalorian crosses paths with Taika Waltiti’s IG-11, a bounty droid in the line of IG-88; as some have noticed, we are slowly going down the line of bounty hunter types from The Empire Strikes Back. IG-11, to the Mandalorian’s dismay, walks straight into the compound filled with Nikto aliens with blasters as big as their bad attitudes, and a fire fight ensues. Together, the two bounty hunters succeed in overcoming the rough crowd, though, and in the process add increasing levity to the show to counterbalance its dark and bleak opening.

Inside the compound, a tracking device leads the pair to a space bassinet, and within, a 50 year old toddler version of Yoda.  Only a robot without feelings would want to hurt the adorable figurative foundling, which is exactly what IG-11 prepares to do along the lines of the bounty instructions it was operating under. The child is saved only because the Mandalorian is a quicker draw.

Throughout the episode, Göransson’s music finds just the right time and beats to push the story forward or to heighten its enjoyment. His closing theme has one ready to hop atop an orbak and, hat in hand, ride off into the sunset. But for the cutest addition to the Star Wars universe since the baby Ewoks of Return of the Jedi, his music probably would have commanded more attention.

“The Child,” titled for the subject of the bounty, is entirely a journey episode: the Mandalorian traveling from the compound with the bounty to the stars above the planet. Those familiar with Japanese film, television, and manga, might have made an immediate connection to the Lone Wolf and Cub series, which features a master-less samurai, or ronin, who wanders with his toddler child from one adventure or job to the next. The visuals emphasize the Mandalorian walking with the floating bassinet and child through the dusty canyons of the desert planet. Immediately, the pair are attacked by a trio of Trandoshans, the species of Bossk (one more Empire bounty hunter off the list), who like IG-11, are seeking the bounty for the child. The Mandalorian ends up victorious, but injured. Later, at night by firelight, the Mandalorian works to heal a wound on his arm, which prompts the child to climb out of its bassinet with an intent to touch the injury. This is our first hint that there is something special about the small green joy bundle beyond the fact he appears to be the same species as Yoda.

The next day, the Mandalorian makes it back to his ship, only to see it dismantled and picked over by offworld Jawas. After he disintegrates a few, and in the process provides a visual for Darth Vader’s admonition to Fett in Empire, the Jawas take off in their sandcrawler, leading to a short and entertaining pursuit by the armored bounty hunter. In an attempt that features an allusion to Indiana Jones and the Last Crusade, wherein Nazis try to smash our favorite archeologist between a rock and moving tank, the Jawas try the same with similar results. Ultimately, the Mandalorian proves the Goliath to the Jawas’ Davids, and they escape his pursuit. Defeated, he finds himself once again helped by Kuiil, who advises the Mandalorian he must barter for his ship’s parts back. This he does, again after some amusing back and forth, and he finds himself in a cave in search of an egg, and then at the wrong end of a giant horn.

The horn belongs to a mudhorn, basically a giant hairy space rhino. The Mandalorian may be excellent at hunting bounties, but he’s awful at the big game variety. He gets beaten soundly, left to depend solely on a knife which he holds before him in a kneeling position as a last desperate measure. The mudhorn charges and… begins to float. Our foundling is a Force user! The mudhorn, disoriented by its new ability to violate the laws of physics, is unable to stop the Mandalorian from efficiently striking a fatal stab wound.  The child passes out from the effort and the Mandalorian fetches a giant hairy egg, which he exchanges for his goods and parts. His ship whole, the Mandalorian invites Kuiil to join him, though the offer is declined, and sets off for the Client with the bounty safely asleep in the cockpit beside him.

The mystery of what will happen to the green toddler is left for the viewer to wonder until the next episode. Beyond that, The Mandalorian has shown itself capable of capturing the viewer with relatively short episodes, 39 minutes and 32 minutes for the first and second, respectively, through the use of creative characters and showing a lot more than simply telling. It also succeeds in providing a Star Wars that doesn’t require known characters and elements to pull in the viewers. Granted, it’s chock full of the familiar, relying on aliens and images that any one familiar with the original trilogy would recognize. Thanks to Göransson’s score, however, invoking the spirit of Morricone’s spaghetti western scores, The Mandalorian avoids simply being an amalgamation of just the familiar. Its only stumbling block is the nearly complete absence of women in the show, with only the Armorer appearing with a speaking role.

Until the conclusion in January, with a gap for The Rise of the Skywalker, Fridays will be an eagerly awaited day of the week for the continuing adventures of the Mandalorian.

Follow-up to ForceCast Discussion of Fangirlblog 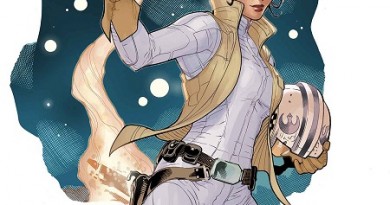