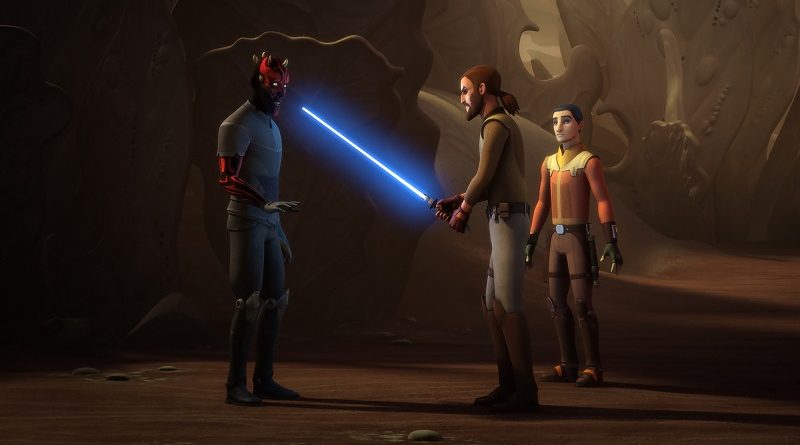 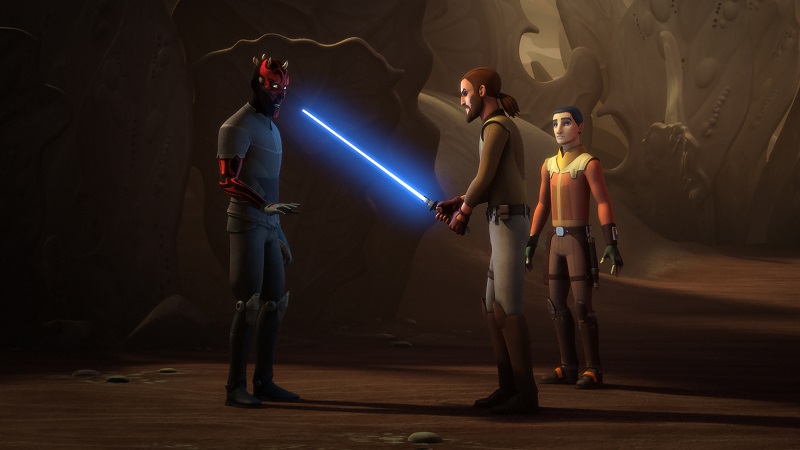 In the final act of “Visions and Voices,” the villainous character formerly known as Darth Maul makes the declaration, “It ends where it began…” This revelation by Maul alludes to cryptic information gleaned from the combining of Sith and Jedi holocrons earlier in the season, and finally deciphered in the mid-season finale of Rebels. It may also hint at Maul’s own fate, but more on that later. “Visions and Voices” thankfully continues the trend of Rebels’ recent string of solid episodes which touch upon season-long story arcs with at least a small dose of character development.

The episode begins in the middle of a mission briefing and Ezra Bridger hallucinating the presence of Maul in and around Chopper Base. Set in the midst of the darkened atmosphere of an impending storm, complete with flashes of lighting, there are strong overtones to classic horror film tropes as Kanan’s padawan becomes more and more frantic as Maul seems to appear and disappear around him. After Ezra nearly kills an innocent rebel, Kanan takes him to see the local resident expert on the Force, the Bendu. Voiced by Tom Baker, the Bendu’s presence in “Visions and Voices” initially elicits a bit of fun thanks to Baker’s bemused acting, but it fades somewhat when the character appears to as served as a means almost entirely to place Ezra and Kanan somewhere away from the base for Maul to make his real appearance. The Bendu, by and by, simply vanishes once Maul arrives, imparting no wisdom or anything else for the matter.

The dialogue between Maul, Kanan, and Ezra, is tense, with Maul having found the rebels courtesy a mental link between him and Ezra resulting from the holocron adventure in “Holocrons of Fate.” Upon the claim that he has found a way to unjumble the information from that experiment, Ezra agrees to join Maul to finally find the answer to how to defeat the Sith. A tracking device, placed earlier by Sabine on Ezra’s wristband, allows Kanan and Sabine to follow the pair to their destination, Dathomir.

For those whose only exposure to the Star Wars beyond the movies is Rebels, the Witches of Dathomir, or the Nightsisters as they called themselves, played a critical role in an earlier Star Wars animated show, The Clone Wars. In that series, a tribe of the Nightsisters were revealed as the origin not only of Maul, but also his brother, Savage Oppress, and the major female villain of that show, Asajj Ventress. Led by the indomitable Mother Talzin, the Nightsisters accessed the Force to perform magic, often symbolized by green haze, until they ran afoul of Palpatine’s plans and were wiped out under the menacing gaze of General Grievous and Separatist droid forces. It was their trademark green mist, revealed in the Season Three trailer for Rebels, which led many fans to wonder if the show would revisit the planet and its former occupants. 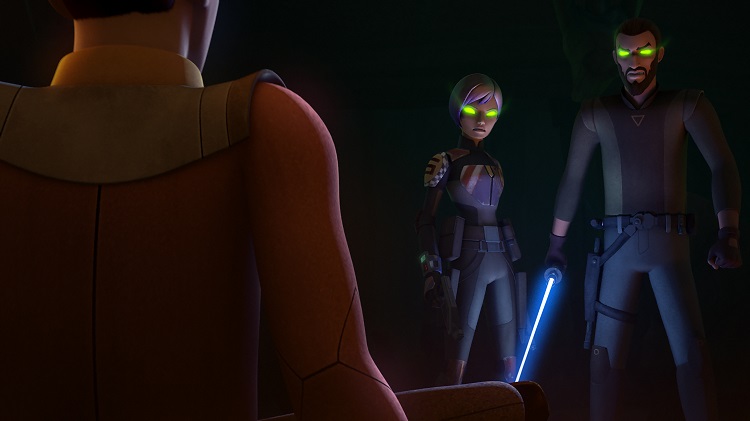 In the interim of nearly twenty years, it seems the only inhabitant has been Maul, who moved into their sanctum and began decorating the former holy place with his own collection of memories. Notable among the décor is a portrait of the Mandalorian Duchess Satine and the legendary darksaber. As revealed in The Clone Wars, the darksaber is an ancient light saber originally captured by Mandalorians when the militant faction fought a war against the Jedi Order of a previous era; it was wielded by a relative of Sabine Wren’s, Pre Vizsla, before Maul assumed ownership. Rarely has Rebels devoted so much to the stories of The Clone Wars in one scene as it does on the return to Dathomir.

The final determination of the holocron message arranges a bright flashing arrow at the likely conclusion of the Maul storyline in Season Three. It all boils down to Obi-Wan Kenobi and Tatooine. In “Holocrons of Fate,” many fans speculated that Maul had seen Obi-Wan during his vision, as he exclaimed, “He lives!” This, along with Ezra’s vision of a planet with twin suns, led many to believe there was a connection to “Old Wounds,” a one-off story published in the Legends comic Star Wars Visionaries, which told the tale of Darth Maul tracking down Kenobi on Tatooine to kill the Jedi who had made him literally half the Sith he used to be. Duchess Satine’s portrait marks another connection to Obi-Wan, as the Jedi possessed an unrequited love for the Mandalorian noble woman, whom Maul murdered to torment Kenobi. It’s also a throwback to The Clone Wars, in which Kenobi and Maul repeatedly fought against each other, with Master Yoda pointedly telling Obi-Wan he had a special connection with the Sith since the events in The Phantom Menace. “Visions and Voices” not only confirmed that it was Kenobi that Maul referenced in “Holocrons of Fate,” but that the planet with twin suns was Tatooine where Maul first encountered Qui-Gon Jin and Obi-Wan Kenobi. The likelihood of something like “Old Wounds” occurring has now become extremely high.

Ezra’s own participation in an “Old Wounds”-like storyline could also be vital with Maul’s continual insistence that Ezra is or will be his apprentice. For as much as Maul has foresworn his Sith past, it’s a recurring theme within the Sith that the apprentice will eventually kill the master. It’s plausible that perhaps Ezra will perform the de facto role of “apprentice” and be the character to kill Maul in place of Owen Lars. It would be an ironic death for the villain who sought to escape his original destiny. The death of Maul would help conclude Rebels’ own reaching back to The Clone Wars for story material and refocus it on the future, namely, the stories that surround the original trilogy, such as Rogue One. 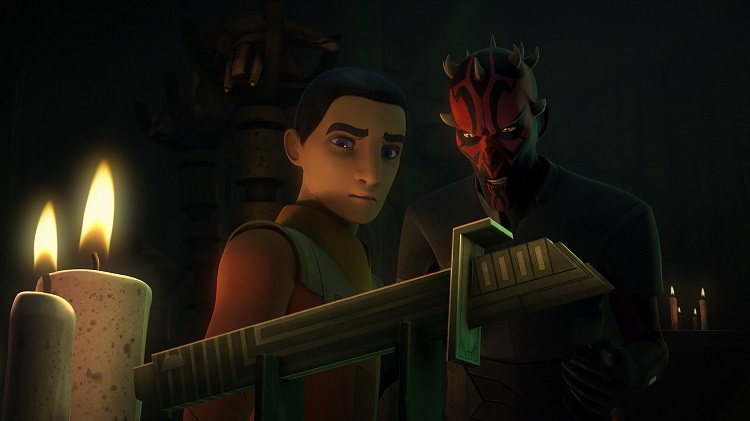 Beyond the implications of “Visions and Voices,” we get Kanan’s assurance that Ezra is completely trustworthy in the presence of Maul, something that was noted in “Holocrons of Fate” but now confirmed with the passage of time. Ezra explicitly rejects Maul’s offers to become an apprentice, and for now it may be that the Dark Side no longer holds the allure or threat it once did for the Lothrat. For our women characters, due to the story’s emphasis on Force users, there simply was little room in the storyline for Sabine or Hera to do much at all.  Hopefully the pair will get more screen time and story development once we return from the mid-season hiatus, and given that the episode concludes with Sabine taking the darksaber, it seems quite likely. Likewise, given Hera’s connection to Grand Admiral Thrawn, the more we delve into the other season long storyline, Hera will probably get more focus.

“Visions and Voices” works as a mid-season finale episode by providing a clear direction for what’s to come.  Paired with last week’s “An Inside Man,” both dominant Season Three storylines have been primed to make the second half of the season a much more exciting one than the hit or miss half that’s come to a close. While the jaws of fate may be closing in on Sam Witwer’s Maul under the twin suns of Tatooine, Grand Admiral Thrawn’s grand plan to crush the Empire’s enemies is equally poised to catch our rebels and deal a terrible blow.

For more on “Visions and Voices,” check out the episode guide on StarWars.com.

The Clone Wars: Season Four: Season In Review – Part One

Assembly of Geeks: Geeks of Christmas Past, Present, and Future