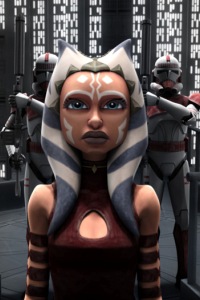 Season Five of The Clone Wars concluded yesterday with “The Wrong Jedi.” Ahsoka faced not one but two trials, Anakin Force-choked two suspects, the Jedi traitor was exposed, the Jedi Council showed its true colors, and Ahsoka ultimately made a brave and fateful choice.

After the episode aired, Eric Goldman at IGN shared his great interview with Ashley Eckstein. They discuss the finale, Ahsoka’s future, and Year of the Fangirl.

Also be sure not to miss the comments from Ashley and Dave Filoni in the featurette for the episode on StarWars.com.

Megan has much praise for “The Wrong Jedi” in her review:

Ahsoka’s characterization took an effective turn in “The Wrong Jedi,” finally showing how her flaws are an integral part of her. She could be a loner instead of hot-headed; she goes her own way, without replicating Anakin’s rebelliousness against authority. Ahsoka does not dislike authority, but simply ignores it. Maybe she made the decision to leave the Jedi Order when she jumped into the air shaft at the end of “The Jedi Who Knew Too Much.” Historically Ahsoka is friendly but doesn’t get close to people – she left both Lux Bonteri and Riyo Chuchi (who makes a brief cameo in the courtroom) without looking back, and if Barriss was her only friend in the Temple and then she may not have much to stick around for. This episode not so much deepens as widens her characterization, and makes it more evident that she might have been a bit of an outsider all along.

Later this month we’ll post our Season in Review series for Season Five, like we did at the end of last season. There’s certainly a lot to cover!

Update: There is so much good discussion on the season finale around the web, it’s worth sharing.

Over at io9, Lauren Davis recaps the episode and shares her thoughts on Barriss.

Okay, I’m going to take a brief timeout here, because I promised I would do this last week, and I am a lady of my word: Chewgumma, you were completely right and I was completely wrong. Last week, we were debating whether Barriss would prove the final villain of this piece. I had huge, major doubts that Barriss was behind the bombing because she has an established history during this time period, one that includes dying in Order 66 in the comic adaptation of Revenge of the Sith and I didn’t think they’d go so far off-book with this particular character. But today, Barriss’ Wookieepedia entry is a mess. I don’t know if you’re one for victory boogies, Chewgumma, but I cede the dance floor to you.

Putting questions of canon aside, however, Barriss actually works quite well as the mastermind behind the bombing for the purposes of the show alone. She and Ahsoka are peers, after all, and Ahsoka has been through a lot this season—training freedom fighters, battling pirates, and now operating as a fugitive and murder suspect without the aid of the Jedi Council. Barriss’ murderous bombing of the Temple seems nearly as extreme as Anakin’s slaughter of the younglings in Revenge of the Sith, but we don’t know what tragedies and betrayals Barriss has witnessed in parallel. Barriss and Ahsoka have both come of age in an era where the Jedi have given them much to doubt. It’s a shock that Barriss would go this far, but between Barriss’ radical actions and the Council’s refusal to stand by Ahsoka during this trial, Ahsoka has to question whether she is truly on the side of right.

At Newsarama, Lucas Siegel has praise for Ahsoka’s role in the The Clone Wars.

Then, as the season rolled on and I got to know the characters, there was of course one major standout: Ahsoka Tano. The padawan of Anakin Skywalker, Ahsoka was new to the program, offering viewers a “way in” to the Jedi order and the Star Wars galaxy. She was spunky – and impetuous, fitting to Anakin – she was hopeful and nervous, she was dedicated and capable, and she cared… the last of which of course sets off warning signs to anyone with knowledge of Star Wars lore – a Jedi isn’t supposed to do that, at least not this way or this much.

Ahsoka grew quickly. Over five seasons, she became a powerful Jedi, but so much more than that – she became a powerful friend and confidant to Anakin, to Padmé; she even showed great wisdom, occasionally counseling Jedi much her senior in power, experience, and age. She occasionally exhibited the rare force power of foresight: being able to see possible futures, she held Anakin to the light as an anchor, and she got out of some major scrapes all on her own.

This was the best female character I had come across in all of Star Wars, and really became one of the best, period.

Overall this was a powerful and brilliant but also disturbing  and upsetting finale which really highlights how far the Jedi have fallen, not only with Barriss turning into a deranged, machiavellian psychopath but also with the Council turning against one of their own Jedi. When Ahsoka left the Jedi Temple it was heart breaking enough to make me cry but I don’t blame her. Actually I admire her choice to let go of her home and the only family she’s ever known; unlike Skywalker, Ahsoka mastered the ability to let go of attachments. I also admire the restraint she showed; if I were in her position I don’t think I would have walked out with so much dignity. I think I would first rage at the Council, demand they get on their sorry, unworthy knees and beg to be forgiven, not forgive them no matter how pathetic they seem and then storm out of the Temple using the Force to knock over a couple of big, fancy and probably sacred statues as I went. The Jedi Order don’t deserve to have Ahsoka; she is a true representation of what a Jedi should be like and an Order full of corruption doesn’t deserve to have someone as good and pure as her within their ranks. Ahsoka is a far more mature, selfless, compassionate, forgiving and good-hearted character than her former Master ever was.

Over at Big Shiny Robot, Bryan Young asks if this episode makes sense knowing what happens in Revenge of the Sith. His Full of Sith podcast attended the screening of the finale last week and has audio from the Q&A. This quote from Dave Filoni is intriguing:

One thing we’re trying to do at Lucasfilm is have an immense level of collaboration these days. It’s one of the things as we go forward that we really, really want to have. So that as fans you can really be certain that when things happen across different Star Wars IP, from comic books to novels to videogames to new movies to TV, that it’s part of the same universe. That’s not been something that I think we really had prior to now. It’s always been this is George’s universe and what he’s doing with the movies and his TV shows, and then there’s what everybody else is doing. And it’s too much to keep control of. And I know more than anyone how much consternation that has caused fans, because they’re like I love this character or I love this character. I think that what we’re trying to do is find a way to make everything work very cohesively.

Tricia Barr took her understanding of brand management and marketing, mixed it with a love of genre storytelling, and added a dash of social media flare to create FANgirl Blog, where she discusses Star Wars, fandom, and strong female characters. She also writes about Star Wars for Random House’s science fiction and fantasy blog Suvudu.com and for Star Wars Insider magazine. 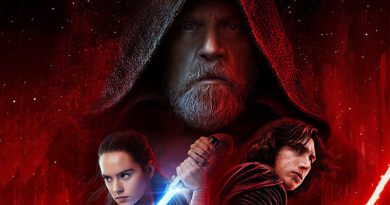 What We Bring With Us – Star Wars: The Last Jedi Reviewed 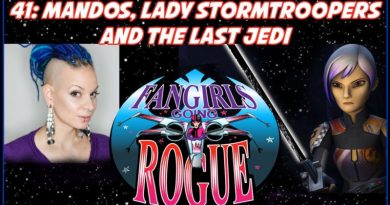