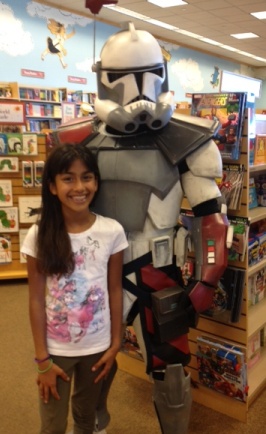 Star Wars
October 18, 2012June 10, 2015 Linda Del Rey, Erich Schoeneweiss, Linda Hansen-Raj, Skylar Hansen-Raj, Star Wars, Star Wars Reads Day
[Tricia’s note: One of my goals for FANgirl Blog has always been to give more fangirls a chance to have their voices heard. So when I found out that Linda’s daughter not only was going to their local Star Wars Reads Day at the bookstore, but also having a Star Wars Reads event at her school, I made sure to offer her a chance to write up her experiences for the blog. Here’s her report. Thanks, Skylar!]

“As you know, class, I won’t be here on Friday,” my teacher said. I tried hard not to groan. What about our Star Wars Reads Day party? I was so looking forward to it! Miss H looked at me and smiled. “So, instead of a party on Friday, we will have it next Friday. In fact, this month is Star Wars Reads Month!” I grinned. This was going to be awesome!

The next morning, I swung off Snuggles, the horse I ride. As part of FANgirlblog culture, Tricia, my mom, and I all ride horses. “Ready?” Mom called. I nodded, gave Snuggles a carrot, and bounded off to the car.

Soon, we were off the freeway and parked in the Barnes & Noble parking lot. I sprinted up the escalator and was instantly thrilled by what I saw. Stormtroopers, scout troopers, and even a Jedi roamed about. I helped myself to Yoda shaped cookies and settled down at the craft table. After endlessly trying and trying to make an origami Boba Fett, I heard someone shouting, “Last chance for raffle! Win these!” He held up a vintage collection of bookmarks and waved them around. “Cool!” I whispered as I filled out my name and threw it in the bucket. The Jedi came forward. Oddly, he looked familiar. He picked up a piece and announced, “Chris? Chris?” A man stepped forward and smiled. Oh well, I thought. I guess he was the Chosen One.

The Jedi turned around and headed back to an X-wing pilot who was talking with my mom. I ran forward and introduced myself. “So you guys were also at the Phantom Menace 3D party?” Mom asked. They nodded. “We were also at Celebration IV!” the X-wing pilot said.

“No wonder you look familiar!” I exclaimed. I remembered them from the Phantom Menace party.

My dad appeared. “Have you seen the cool books?” he asked. I shook my head no. Quickly, I followed him to the book area. I have some Star Wars books, but there were a lot I didn’t know. Next thing I knew, I was walking out of Barnes & Noble carrying a ginormous pop-up book, a Jedi Knight book, and a lightsaber flashlight. Yippee! I couldn’t wait until next Friday for more Star Wars at school! 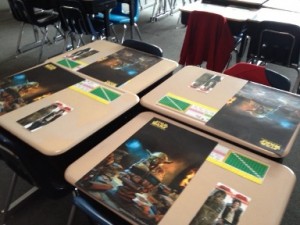 I walked in the classroom, secretly munching on a chocolate bar from recess. “Bam bam baba ba bam,” the Smartboard played. My jaw dropped open. The Star Wars theme song! I looked at my desk. A collectible poster of Yoda and two Scoundrels bookmarks from Erich at Del Rey sat there. After recess announcements, I could barely stop smiling.

“Who knows Star Wars?” Miss H asked. My hand shot up, as tall as a spear. She quickly passed out Star Wars worksheets. “This is your reading assignment today. First…” she went on about the instructions. After reading and highlighting the worksheet, Miss H asked the class some questions.

“Who are your favorite characters?” Boba Fett, Ewoks, and Captain Rex were popular. I found this surprising, because I thought that maybe Luke, Darth Vader, and R2-D2 would be top hits. My favorite characters are a lot of the strong girls – Ahsoka, Padmé, and Leia. I was tempted to say Mara Jade, but I was pretty sure no one was as hip as I am about Star Wars characters.

Miss H also asked about favorite movie episodes. I had to think about that for a second. Mine is Episode VI, probably. I mean, who doesn’t want to see an Ewok in real life? All too soon, Star Wars Reads Day was over. 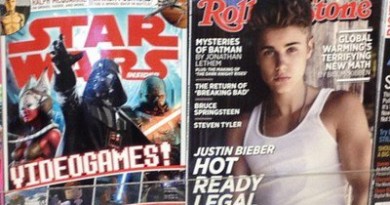 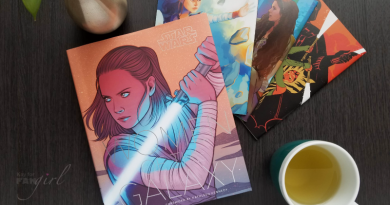