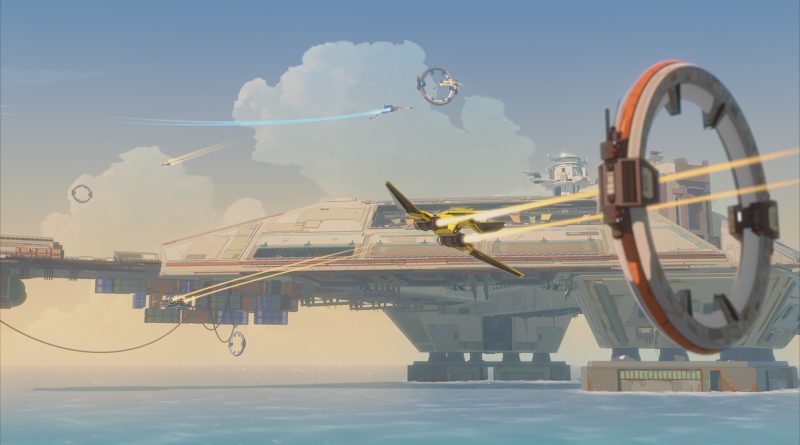 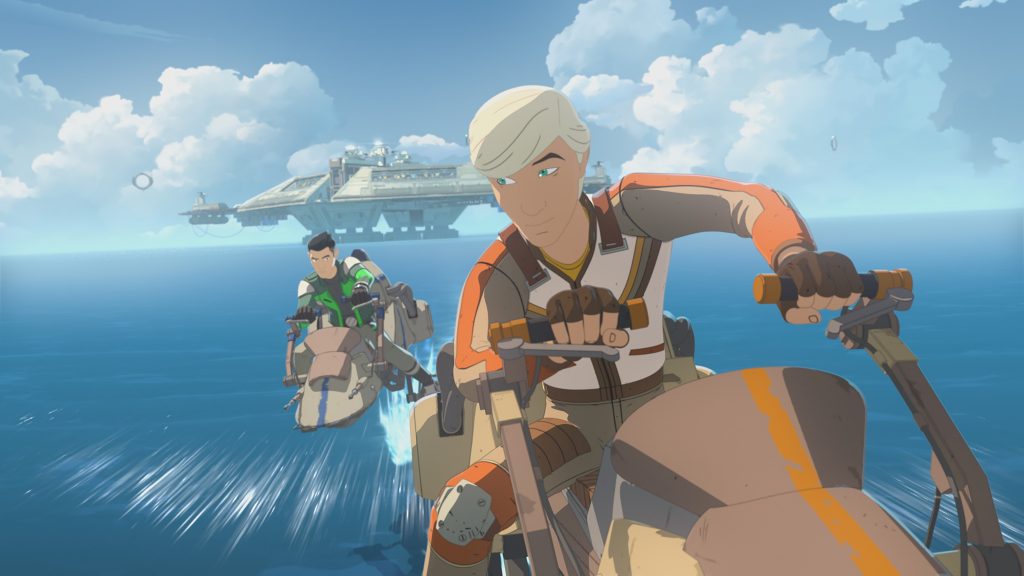 When Star Wars Resistance premiered on October 7, two additional episodes were released on the DisneyNow digital streaming platform, “The Triple Dark” and “Fuel for the Fire.”  These episodes, in addition to the premiere, “The Recruit,” were not haphazardly released together. The trio represent an introduction to the major players of the show, as well to the fueling platform, the Colossus.  In “Fuel for the Fire,” we not only get to meet fellow racing aspirants, like Kaz, but also pull the curtain back a little further on Jarek Yeager’s past.  Additionally, we have now fully established the parameters within which the show will play within, at least for the immediate future.  “Triple Dark” established the First Order’s presence and their pirate mercenaries, as well as the rougher side of the Colossus in the form of a money hustling Aleena, among other undesirables.  “Fuel for the Fire,” meanwhile, established the presence of others who yearn to be a part of the platform’s elite racing scene, no matter the cost. Tucked into the ending, however, was the ominous introduction to Captain Immanuel Doza, high above in his control tower – a veritable eye in the sky observing everything and not necessarily for the best.

Under his gaze, the best pilots compete regularly in aerial races over and around the platform; something that Kaz yearns to watch instead of focusing on his duties as one of Yeager’s mechanics.  This desire underpins Kaz’s motivations in the episode, which lead to his manipulation by the newly introduced character, Jace Rucklin (voiced by Elijah Woods, who apparently lent his bright blue eyes to the character).  After Kaz blows up at Yeager over a malfunctioning engine and storms off, he’s approached by Rucklin and Rucklin’s crew (including a Sullustan for Nien Nunb fans!) at Auntie Z’s tavern.

The group bond over their desire to race, and it leads to Rucklin inviting Kaz to a speeder bike race over the emerald blue waters of Castilon. The speeder bike race represents a wonderful display of the dynamic direction at work in the show, turning what might have been a rather plain depiction of two bikes zipping along parallel paths toward a floating ring into something more active, and well, also more attractive to the eye.  The camera jumps from various perspectives, keeping the race fresh, and includes what may be a point of view shot from Kaz’s perspective.  Unbeknownst to Kaz, Rucklin and his crew had sabotaged his bike, resulting in Rucklin saving his life and building a quick connection of camaraderie, not to mention a sense of indebtedness that Rucklin immediately leverages into having Kaz take him to Yeager’s personal quarters on the pretense of seeing the shop owner’s racer.  We never see the racer, just trophies. So it remains a lingering mystery that will undoubtedly make for a more exciting reveal later on in the show.

While Kaz gazes at photographs of Yeager, one placing the crusty veteran at the Battle of Jakku in an orange rebel pilot jumpsuit, and the other, establishing he once had a family that visited Disney’s Galaxy Edge Batuu’s Black Spire Outpost (introduced in the latest Thrawn novel by Timothy Zahn), Ruckland steals a container of Corellian hyperspace fuel for use in an upcoming race.  Kaz only realizes this when he walks in on Tam and Neeku discussing its absence and volatility.  While Kaz doesn’t get to Rucklin in time to save his racer, he does save the deceitful pilot.  His confrontation with Rucklin, observed by Yeager, earns him a respite from his behavior.

The moral of the story? Don’t take shortcuts to success. This is the general story laid above the serial plot of Kaz’s mission on Colossus, and well woven into it, hints of Yeager’s past and the question of where Immanuel Doza falls on the scale of the good, the bad, and the ugly.  Gradually, Kaz is earning the maturity that eluded him through most of his life due to a childhood on Hosnian Prime where his father cleaned Kaz’s messes and the wreckages of his poor decisions.  Outside of Kaz and Yeager, our other characters were generally present to support the main characters and guide them along the plot points of the episode.  That doesn’t mean it isn’t nice to have a character like Tam present and speaking, even in a secondary role, but hopefully we will have an episode focused on the most talented member of Tam’s repair crew.

As mentioned above, Lucasfilm’s animation continues to display its deftness with light and shadow; creating beautiful contrasting images that feel cinematic and absorbing.  Special honors to the sound editors who didn’t hesitate to find that perfect sound of footsteps on metal grating. It’s a small touch that underline the efforts put into the show. Kudos, as well, for placing The Clone Wars‘ Bosco Ng, a person of color, into the director’s chair.  Rebels had a noticeably non-diverse series of directors and a shift to something different is well received. We definitely hope to see women get the same opportunity in the future, as even writing credits have generally been few and far between for the opposite sex.  That Athena Yvette Portillo is the executive producer and Amy Beth Christenson the art director, there’s progress, but not nearly enough.  Things are off to a good start for Resistance, let’s hope they continue to improve.

For more information about “Fuel for the Fire” and Star Wars Resistance, check out the episode guide here! 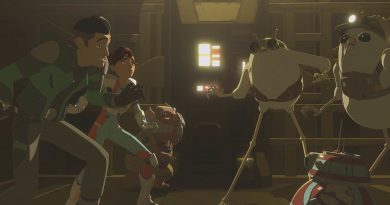 Star Wars Resistance – From Beneath Review 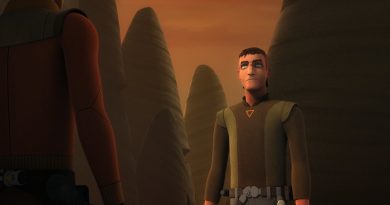 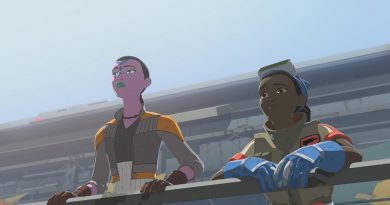