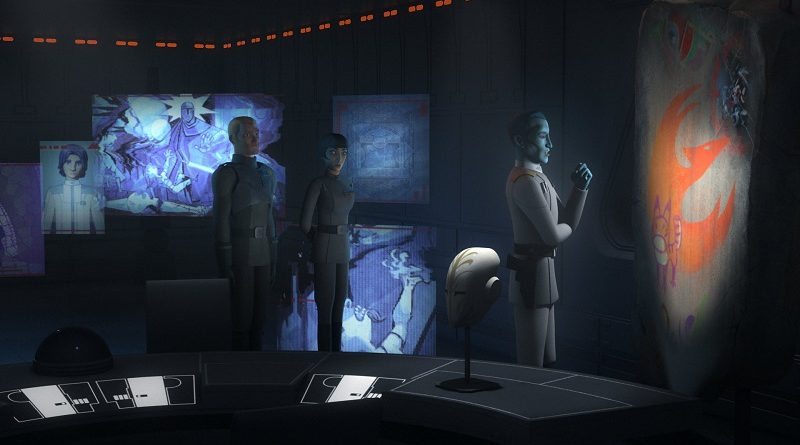 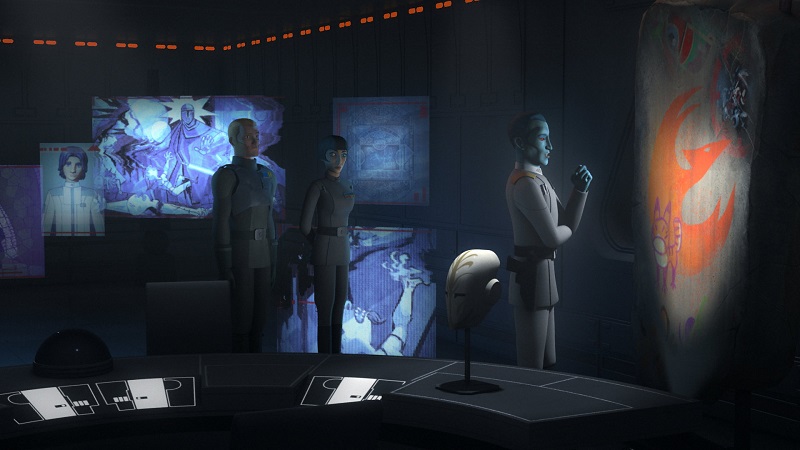 “An Inside Man” not only returns the rebels to Lothal, but also Rebels to the overarching threat posed by Grand Admiral Thrawn. Since Thrawn’s celebrated resurrection from the Legendary Universe in the first episode of Season Three, the blue-skinned officer has only truly been allowed to shine in “Hera’s Heroes” and has otherwise been relegated the role of villain plotting off in the shadows. “An Inside Man” not only emphasizes Thrawn’s ruthless nature when it comes to strategy, but it also confirms a fan theory concerning the identity of the new Fulcrum rebel agent.

When Thrawn was introduced in “Steps into Shadow,” our favorite muttonchops sporting Imperial, Agent Kallus, subtly criticized the effectiveness of Thrawn’s success in crushing an insurgency by noting the level of civilian casualties. The brutal manner of Thrawn’s tactics become part of the focus of “An Inside Man,” when the admiral takes steps to stop rebel sabotage inside the Imperial arms factory on Lothal.  The factory is also the home to a top secret fighter initiative, a personal project of Thrawn’s, and this brings Ezra and Kanan back to the rebels’ old stomping ground. The leader of the sabotage is an old friend of Ezra’s, who smuggles the pair into the factory just in time for an inspection by Thrawn, joined by Governor Pryce and Kallus.

Thrawn immediately orders the sabotage leader to climb aboard a stationary speeder to allegedly test the engine, but truly as an example of Thrawn’s decision to force all the workers to personally test the equipment they have been sabotaging. The result is an explosion and the death of Ezra’s friend, notably accompanied by a grimacing Kallus. Lesson imparted through the purposeful death of a worker, it’s the first time on Rebels that we have seen Thrawn’s ability to apply brutally effective tactics. Additionally, Kallus’ response to Thrawn’s de facto execution of a rebel completes the speculative line from the Imperial agent that began with his commentary from “Steps into Shadow” and ends with the reveal that Kallus is Fulcrum. 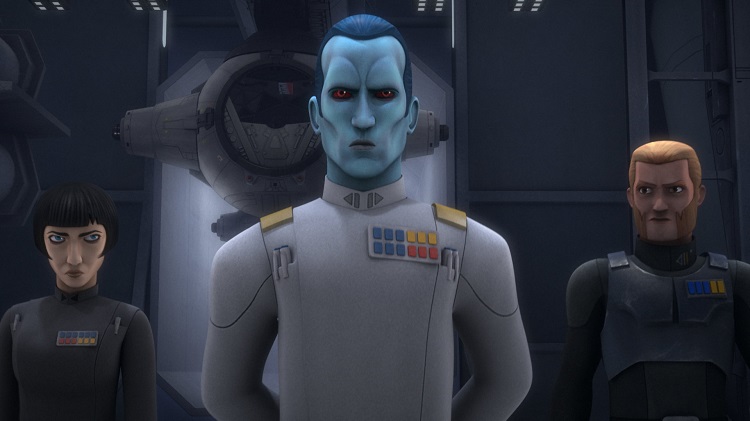 Kallus’ transition from loyal Imperial prosecutor of rebels to traitor began in “The Honorable Ones,” one of Season Two’s strongest episodes, which saw Kallus and Zeb temporarily marooned on an ice moon. (Ezra directly references this event, as if the writers were fearful of short termed memories.) That episode concluded with Kallus somberly reflecting on his importance within the Empire and seemed to pay off with Kallus helping Sabine Wren escape in this season’s “The Antilles Exchange.” Given that episode premiered the new Fulcrum, the reveal in “An Inside Man” seems more like confirmation than surprise.

The discovery of Kallus’ new allegiances, while surprising to the rebels, was immediately deduced by Thrawn at the conclusion of the episode. This deduction came in Thrawn’s office, a room filled with artwork seemingly connected to many of the rebels, from Sabine’s graffiti to the mask of a Jedi Temple Guard. In the home of his inspired tactical genius, Thrawn confidently announced his intention to uncover the rebel mole, to which Kallus coolly speculated its rousing success in the first move of what will likely be a fascinating game of cat and mouse. While “An Inside Man” began with Ezra’s return to Lothal, the episode truly belongs to Kallus and Thrawn.

The larger perspective for the future of Rebels is another winner of “An Inside Man.” Thrawn’s style of strategy is reinforced in the episode, one of forcing others into entering scenarios where chances of success are slim from the get-go. We saw it in “Iron Squadron,” when Thrawn pushed Admiral Konstantine into taking a ship well below the size of his comfort level, and then with the execution of the rebel by forcing him to acknowledge his workmanship on an Imperial speeder and requiring him to test it when both parties knew the eventual result. He then expanded it to the rest of the work force, defeating the future saboteurs before they had a chance to build any more faulty equipment. When the time comes for Thrawn to set into motion his grand plan for our rebels, it will undoubtedly take some form of this tactic, as well any plan Thrawn has to expose the rebel mole. 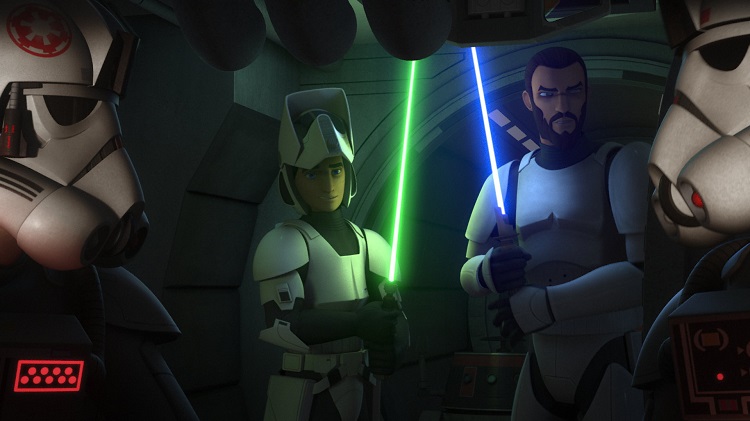 Overall, “An Inside Man” is a refreshing return to Rebels’ ability to combine character development with moving its season long storylines forward. The partnership of Ezra and Kanan, while comfortable, offered little new to focus on other than the idea that everything is just dandy between the two. Re-introduced in this episode as Thrawn’s special TIE fighter with shields was the TIE Defender, which originated in the 90’s era combat simulator TIE Fighter and will undoubtedly play a role in Thrawn’s plan for the rebels.

Women characters, unfortunately, all played secondary roles in “An Inside Man,” with Governor Pryce essentially following behind at Thrawn’s heels and missing the opportunity to be more fleshed out in the same story as our other two important Imperials. Instead, Pryce is played off as helpless to stop the sabotage occurring in her factory, helping to reduce her character as one that needs Thrawn to solve all her problems. With just over half a season remaining, we can hope that Governor Pryce is given a chance to show why the Emperor sees her so favorably. Despite this flaw, and for the reasons noted above, “An Inside Man” is a hopeful step toward a strong second half for Rebels.

For more on “An Inside Man,” check out the episode guide at StarWars.com. 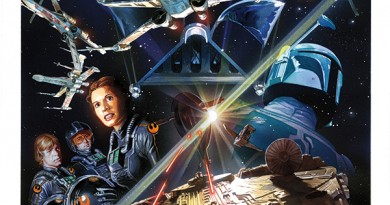 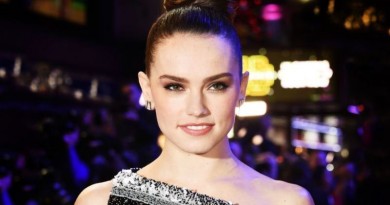 Bringing Your A-Game to Geekdom