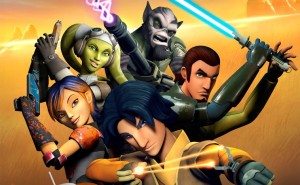 The big news this month speaks for itself: the launch of Lucasfilm’s new animated series, Star Wars Rebels. Last month I had the privilege of attending a press screening, and I can’t wait for everyone else to be able to experience the stories with Hera, Sabine, Kanan, Ezra, Zeb, and Chopper. Oh, and some pretty nasty villains, too.

GeekGirlCon Recaps – In Seattle on October 11-12, FANgirl contributors will be participating in the convention panels on Star Wars and the Heroine’s Journey panel. We’ll be sure to post recaps as soon as we have them.

Fangirls Going Rogue – The theme of this month’s episode is “Star Wars is for Everyone,” and we’ll also have highlights from GeekGirlCon, New York Comic Con, Fanboy Expo, and more. In addition, look for a written interview with concept artist Amy Beth Christenson, whose work for Lucasfilm includes The Force Unleashed, The Clone Wars, and Star Wars Rebels.