The term “strong female character” came up quite a bit at WonderCon. Debate over the term is still ongoing, in large part because of its common misinterpretation. For most who use the term, “strong” means strongly written or well written. It isn’t necessarily requesting physical or emotional strength, but often female characters aren’t given equivalent portrayal as either or both. A strongly written character can be physically or emotionally weak. The most memorable characters, male or female, straddle those spectrums. Conversely, what we are asking is that writers avoid creating poorly written characters, no matter their strength.

I continue to apply the term “strong female character” when asking for better portrayals of women in fiction because I believe it best suits what I’d like to see in storytelling. In fact, I have gone even further and coined the term “strong female heroine.” I simply don’t see enough emphasis on heroes, especially from Star Wars’ recent and upcoming offerings. Star Wars Rebels heroic main cast is exactly the change-up the franchise needs.

Using a short, succinct term like “strong female character” or “strong female heroine” is an effective way to convey to creators our expectations; it is communication based on the same principles coaches use when training athletes. Coaches are more effective when they give their athletes a positive suggestion that can be visualized. For instance, if the basketball coach wants her player to square her shoulders during a shot, she would say “square up” as opposed to “don’t stand crooked.” Listen to top coaches in any sport and you will hear them say what they expect from the athlete more often than not, and they deliver those messages in tiny bursts of verbalized information. The expression “I want a strong female character” means a lot more than just three words, but at the same time it gets the point across.

“People talk about strong female characters. I just like to make really good characters. If they’re strong, that’s an aspect of their character.”

The Star Wars Rebels panel did a good job of presenting female creators. Actress Vanessa Marshall appeared on the panel and in numerous accompanying media appearances. Artist Amy Beth Christenson’s contribution to the show was acknowledged as her artwork was revealed. By way of both Marshall and Christenson, the character Hera had significant face time, as well. This allows women as industry professionals, fangirls, and female characters to become normalized by equal exposure; the mainstream media coverage ended up being very balanced. Rebels executive producer Dave Filoni has a track record of creating well-written characters of either gender. Filoni doesn’t have to consciously think “I need to create a strong female character” because he has proven that he is aware of the tropes in genre storytelling and gender issues in fandom. Filoni welcomes fan feedback and engages fandom. As a blogger I’ve learned to be far more skeptical of creators who are unwilling to do that. Fandom respects Filoni because he respects all types of fans. More Star Wars creators could take a few lessons from Filoni’s playbook; there certainly aren’t enough who are able to recognize and verbalize how they create well-written female characters. When that happens, many of the embedded negative tropes Star Wars has recycled will stop being perpetuated. 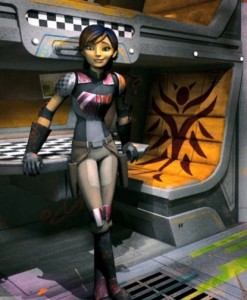 “What I’m looking for in a character of either gender, and unfortunately it’s the women who are most often shafted in this sense, is that I’m looking for agency,” DeConnick said. “They need to have something that they want, an interior life, and what happens with female characters frequently is…you can rob them of that and turn them into a plot device.”

Chiang added to DeConnick’s thoughts, pointing out that great female characters come from “a good script.” As I’ve explained in Agent of My Own Destiny, agency and objectification aren’t the same thing. Lucas did a fantastic job fleshing out both of his female leads at the start, then lost focus in his storytelling for both women as the movies progressed. Compared to A New Hope and The Empire Strikes Back, Leia’s role is relegated to a back burner in Return of the Jedi. Sadly it wasn’t about agency, just a lack of follow-through on a fantastic start for Star Wars’ first lady. In the Prequel Trilogy, where Lucas was the sole screenwriter, he again created a sharp vibrant female lead in The Phantom Menace. Unfortunately he marginalized Padmé in Attack of the Clones by objectifying her in the arena scene and by Revenge of the Sith her arc is essentially an afterthought.

In the WonderCon panel, Simone brought up the “devaluation of the female reader over the decades” – an issue she tackled as a blogger before she wrote comics. She hit upon this theme again in her spotlight panel, where she talked about her experiences as a comics fan, blogger, and writer.

Langley asked Simone what kind of reactions she’s had from the public over the years to her quest to bring stronger female characters to comics. “If I told you the stuff that’s been said to me over the years you would not believe it. I’ve been called all kinds of horrible things. Just being a strong voice and being female brings out a lot of ugliness”, she said, affirming that she still gets “hate mail” every day.

Simone gave the example of when she was first getting into industry, and asked someone “high up” in big 2, what the percentage of readers female was. “I don’t know the percentage and I don’t care”, they replied. It was clear they were not marketing to females, 50 percent of population, which Simone felt was “crazy”.

The devaluing of female Star Wars fans took a turn for the worse in the wake of Revenge of the Sith. Without a doubt, the tone and direction of the movies had a far greater impact than most people realize. The failings in regards to Padmé’s character snowballed down through the licensees just as the Prequel Trilogy tone impacted how the Jedi were portrayed. The movies went dark, and the novels in particular never swung back to the hopeful side of the spectrum. I have shared numerous examples on this blog of the ways women were devalued as consumers since the beginning of the new millennium. I still hear ‘the dark-gritty male stories sell well’ from the creative side, but that comes in the absence of really hitting it out of the park with stories that contain popular Star Wars elements that drew women to the franchise originally, like romance or plucky heroines.

I have seen a lot of chatter in fandom recently about female fans – “you’re too suspicious of every new reveal,” “you’re better engaged with VIPs,” and “why do we need the term ‘fangirl’?” The fact is, female fans are learning we’re pushing back against long-held corporate mindsets, not just individuals. Making noise is the only way to change. We’re not more engaged with VIPs – yes, we have some VIPs who do pay attention to female fans and we’re excited about that – but rather male fans just aren’t used to sharing, just like they aren’t used to not having male characters be the narrative focus.

As to why we need to celebrate the term fangirl – four years ago, the only definition of “fangirl” in the Urban Dictionary was a derogatory one. While things are looking up, they haven’t been perfect: in the way Star Wars stories have been told; how we’re considered as consumers of toys, books, and comics; in the way women’s breasts need to be demarcated for ridiculous reasons like their first appearance in the films on Wookieepedia; and that we can walk on a con floor and find shirts telling how much a man hates fangirls. The irony is that fanboys have never hesitated to express their opinions loudly and strongly about the franchise, tell their own fanfiction, act joyous when they interact with VIPs, and their passion has been celebrated with groups like the Star Wars Fanboy Association. Fangirls have decided they are equally as proud of their geekdom; fangirls are remolding the definition of fangirl. For the most part, fangirls don’t just speak up for our expectations as individuals fans, we speak up for our fellow fanboys and fankids and the future of Star Wars.

Lucasfilm has the most power to directly change how women are perceived within the franchise. Marvel’s The Avengers, Disney Animation’s Frozen, and Pixar’s Toy Story 3 have all taken what the original Star Wars started in Episode IV and V – using multiple character arcs to engage the audience from different perspectives – and ran all of those arcs out to completion. The Clone Wars Season Five finale managed to successfully run Ahsoka’s and Anakin’s arc to a powerful conclusion that gives both characters denouement. The Sequel Trilogy will have to keep a keen eye toward objectification, lack of agency, and completing the arcs of its female lead or leads in order to be ranked among the highly regarded films of the new millennium.

For Star Wars, it’s not about designing strong female characters; it’s about delivering on the potential. 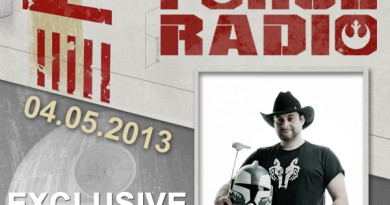 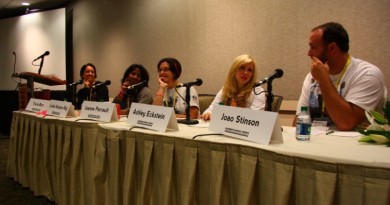 One thought on “Strong Female Characters at Wondercon: From Comics, Star Wars Rebels, and Beyond”