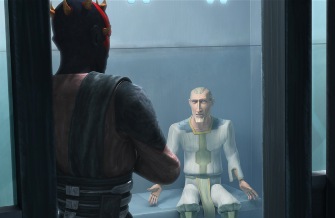 “Shades of Reason” made a big impact on the world of The Clone Wars, knocking Duchess Satine from her throne and giving people – both in the Star Wars universe and out of it – a convincing argument for why the pacifist New Mandalorians shouldn’t be in power. Satine’s people can’t protect themselves.

With the ineffectiveness of Satine’s bank and dock guards, it’s clear to see how the armed and armored Death Watch Mandalorians could impress the citizens of Mandalore into turning to their side. An original trilogy homage – “We’re Death Watch, and we’re here to rescue you.” – made me smile and gives the Death Watch the heroic feeling that will help them get to their goal. A bright blue droid with a smiley face is shot near the beginning of the attack, a pretty obvious metaphor for how the New Mandalorians respond to the threat. The attack on Satine also puts Viszla and Maul into the perfect position to betray each other.

Maul’s dialogue is a bit more straightforward than previously. His brusque “Where are my targets?” sets the tone for the episode. He’s still strategizing and keeping calm under fire while he’s briefly imprisoned. The scene with the brothers in their cell seemed perfectly timed to come on the heels of Thursday’s announcement of the upcoming novel Maul: Lockdown. Maul’s expressions and Witwer’s quiet tone make him more convincing as time goes on. Then, when he attacks Viszla, it looks like Maul is finally letting out his pent-up rage and channeling Savage. That’s also when we see the rare smile from him. 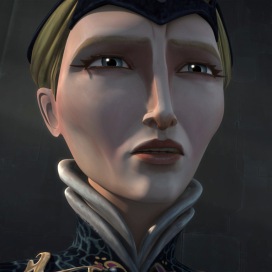 The inclusion of Duchess Satine and her corrupt former prime minister Almec reminded me of the Onderon arc, except backwards. This time the rebel usurpers are the bad guys even though they have the people on their side, the deposed ruler actually is conniving his way back to power, and the noble current ruler is a victim of machinations beyond her understanding. The good guy role goes to Satine, who doesn’t get a lot of screen time, but she does preach her pacifist ways and also lives by them. Interestingly, she doesn’t mention Obi-Wan. All in all I’ve found Satine boring, but I saw parallels to Padmé in –“Shades of Reason” – she is a strong leader who is being both hunted by and mostly ignored by Darth Maul. Seeing Prime Minister Almec back gave a great sense of continuity. Although I hadn’t exactly been wondering where he was all this time, it was nice to see him serve as a bridge between the seasons.

Bo-Katan becomes a more certain character this week. It seems that she has been against the Sith brothers all along, and is less willing to work with them than Pre Viszla was. Thinking again of Steela and Lux in the Onderon arc, or even Obi-Wan and Satine, I appreciate that there was never a suggestion of romance between Bo-Katan and Pre Viszla despite their emotionally charged interactions. 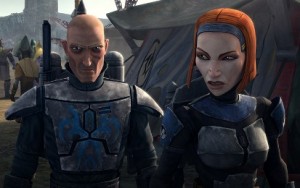 She stands on her own, bringing a third faction into the Maul vs. Death Watch intrigue, and when she leaves at the end she takes warriors with her. There are women on both sides of that conflict, in fact. The Mandalorians have been established in canon before as a society that practices gender equality, and it was nice to see that on screen. Maul is captured by three female guards. Bo-Katan also has a moment where she rescues two children.

Maul’s army still has the flunkies I derided last week – and the darksaber. Another faction introduced last week, the Pykes, have unique-looking weapons but otherwise don’t contribute much to the plot. Perhaps my greatest complaint about “Shades of Reason” is that the bank guards’ dialogue is repetitive: the viewers don’t need multiple instances of a guard calling someone to tell them that Black Sun is attacking in order explain the scene.  The guards do have a moment of usefulness later on, though, when they rescue a woman from being thrown off a wall.

I’ve been thinking more about violence and television targeted toward children since a scene was censored in “Eminence.” This week I noticed that The Clone Wars is rated TV-PG, and a warning before the show airs on Cartoon Network says that there may be violence present, which is fair for parents who watch with their kids. Compared to Ben-10, which comes on beforehand, or Justice League, which comes on afterward and is also rated PG-V, the animation itself in The Clone Wars looks darker, more realistic, and adult, with detail-filled backgrounds and dusty or rusty textures. 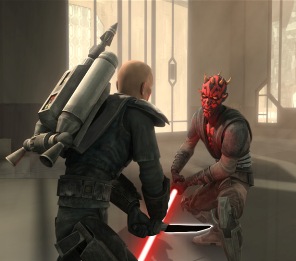 The duel between Darth Maul and Pre Viszla likely would have been bloody if the network had allowed it. The fight was intense and enjoyable, with Pre Viszla seemingly unconcerned about setting his surroundings on fire and Maul getting his lightsaber cut in half yet again. At this point, one would think he would practice moves specifically to prevent that. The musical cues say we should be rooting for Maul, and I was, while also realizing that of the three factions there – the Zabraks, Pre Viszla’s Death Watch, and Bo-Katan’s Death Watch – none of them are exactly upstanding citizens. But in “Shades of Reason” they are all just so unrelentingly cool.

This episode certainly changed big things for the galaxy. It had an impact on the Mandalorians’ system, and showed that Maul has fully returned – his metal legs certainly served him well against Viszla – and that he’s capable of great things. I don’t imagine he will be unseated easily. “Shades of Reason” had a lot going on and flowed well, and I’m curious to see the surely complicated ways all the various plot points will come together next week.