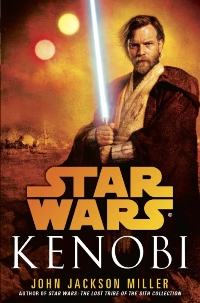 For what seems like a long time, I’ve been on the lookout for a new Star Wars story where the fate of the entire galaxy is not the driving locus of the narrative. I’ve lamented over the lack of localized conflict and self-contained tales.

Star Wars: Kenobi is the Star Wars book I was looking for.

Between Episodes III and IV of the movie saga, the state of the galaxy is something that eats away at Obi-Wan Kenobi, but we don’t see any battles of the war. Instead the whole story of Kenobi takes place in a region of the planet Tatooine, when Obi-Wan is trying to lay low and protect the offspring of his friends. It’s something we don’t get to see all that often in books or movies, especially if it’s a standalone: a narrative that takes place in the aftermath of something much more significant to the main character.

Obi-Wan has suffered several great losses, but he comes to find he’s not the only one. While that theme of loss hangs over many characters, author John Jackson Miller keeps the story in the light. It is full of determination and hope and if that’s not Star Wars… well, it is. It’s definitely Star Wars.

Those other characters who’ve had their share of loss are new creations from Miller. There’s a gender balance among them that feels natural, and they all have distinct personalities. What’s more, we get to view the lay of the land from several perspectives, including that of a leader of the Tusken Raiders. It allows us to see everyone thinks they’re doing right, from that certain point of view. There’s A’Yark, the Tusken leader, who is part of the “bad guys” to the rest of the community, yet faces a plight in which a reader could find sympathy. Orrin is a big-shot farmer whose desperation transforms him into someone with whom you wouldn’t want to be in the same room. Annileen, the proprieter of Danner’s Claim, becomes the best friend Obi-Wan makes on-planet. She’s better than a Strong Female Character; she comes off like a real person with determination and grit as well as fears and worries, facing a world she wishes she had more control over. Obi-Wan himself appears as an easy and believable segue from the end of Revenge of the Sith. It’s hard not to feel something for all of them.

It’s an interesting story, with enough staples of a Western to be easily noticed by casual fans of the genre and enthusiasts alike. And being a Western works, not only due to the farmer/rancher mentality of the Tatooine settlements, but because Star Wars itself already carries part of its basis in that genre too.

Beyond building on that theme, Kenobi makes the Star Wars universe an even richer place. In A New Hope and again in The Phantom Menace, we saw glimpses of life on Tatooine, but this book really fleshes out that environment and lifestyle. It made me think about how Luke never had any real idea what Obi-Wan went through in the years he kept an eye on the Lars homestead. And it made me better understand why Luke wanted to go to a place like Tosche Station so badly. The book even gave me more about what life would have been like as a child with the Tusken Raiders for Tahiri Veila, an Expanded Universe Jedi who isn’t even a part of this particular story at all. There are plenty of references to the movies that follow the book as well – from Ben having Anakin’s lightsaber to the joke of “I didn’t just try. I did.”

John Jackson Miller clearly put a lot of thought into building this narrative. In addition to the aforementioned elements, the story opens with a fable of two suns that serves as a foundation for the beliefs of the Tuskens, but it also mirrors the story of Anakin (the younger sun) and Obi-Wan (the older sun). Deeper facets of ideas like this are left for the reader to discover.

Miller is careful about not hitting the reader over the head most of the time. For example, Obi-Wan tells Annileen he’d rather call her by her full name. It’s because her nickname and Anakin’s are the same, but Obi-Wan doesn’t say it. He doesn’t need to. That’s why it’s surprising how blatant Obi-Wan’s out-loud meditations were. Basically he’s talking to himself to sort out his situation, but even with that in mind it was all a bit too convenient and was the only times in the book the words didn’t seem to flow together so well. In the end, though, it’s a minor annoyance in an otherwise enjoyable book.

And the great thing is, unlike some other recent Star Wars books, Kenobi would be very easy to get into for someone who has watched the Star Wars movies but never read any of the Expanded Universe. This part of the Star Wars timeline is one I only recently began to venture further into. The post-Return of the Jedi era has been my stomping grounds and I’ve always liked moving forward on the timeline. But Kenobi really piqued my interest in what happened between the movies. I hope we get more character-focused stand-alones like this in the future.