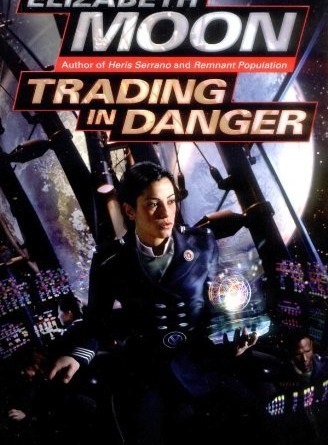 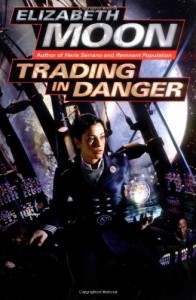 It’s tricky to get a heroine right. It’s tricky to get characters right, but female characters in genre often fall into one of a few molds because of that difficulty. Their skill sets sway too far one way or another – they are either damsels in distress or Action Girls with little substance. I found a heroine who balances realism and strength nicely, though: Kylara Vatta, written by Elizabeth Moon, is the hero of the Vatta’s War series published in 2003. Vatta’s world is a muted sci-fi universe. Kylara is technically in a war but never involved in it as a soldier. She mostly makes trade negotiations, which may not sound thrilling to Star Wars fans. But Trading in Danger, the first book in the series, is the vehicle for a strong lead character who breaks a lot of molds.

As a military academy dropout, Kylara is overqualified for the courier job her wealthy family sends her on as a second chance. Her military experience doesn’t prevent her from making little mistakes, like not knowing how to open a ration pack and having to saw through it with a kitchen knife instead. Details like this make Moon ‘s world and heroine endearing. Kylara is average. She makes mistakes without even knowing she’s making them. She’s inconvenienced. But she’s also strong and decisive, using her professional and military training to keep a cool head in fearful situations.

Kylara spends most of the novel in a uniform, but Moon doesn’t shy away from giving her feminine traits, either. She purchases scented shower gel for herself and often breaks up her duties with a shower. She takes care of her hair. She also takes care of business.

She has a central emotional problem as well as the physical ones: she wonders whether her willingness to help people is a blessing or a curse, and the inciting incident in the story seems to suggest the latter. This section shows how Moon writes about feelings without weakening her character: “She felt the tremor in her hands and fought to still it. Now, for this short period of time, she was still a cadet, and for this short period of time, she would act like one. Even as the dream went down in smoke and ashes, even then…her stomach looped wildly once and settled.” The smoke and ashes here aren’t literal. I love that it was a mistake, not a tragic loss, that propelled Kylara into her new life.

Kylara’s youth, not her gender, cause other characters to question her. She speaks confidently about interstellar law and how to operate in the military. On the other hand, she’s not too precocious: A few times her father notes that she’s doing the same thing other ship captains have done in the past, even if those things are unusual.

The main male character is her father. She also has a boyfriend, who is established at the beginning of the novel.  She has deep emotional reactions to him but he’s more a bookend than a character, and she doesn’t think about him for most of the book. The supporting characters are one of the book’s weaknesses: Ky has a male and a female mentor aboard the ship, but the rest of the crew lacks much personality, and even those two tend to talk the same. But when Moon focuses on individuals she paints strong pictures of the characters’ appearances. Two supporting players are older women, one of whom rescues Ky.

By the way, besides mentions of Ky’s boyfriend at the beginning and end, there is no romance and little description of Ky’s physical attributes. She finds someone attractive in the course of the novel, but decides to put interest in him aside in favor of her role as captain and his as passenger.

One of the things I liked about Moon’s writing style is that female characters are scattered all around her world, too. The occasional soldier or businessperson is casually mentioned as being female. Many of the supporting characters’ genders don’t impact the story in any way. There are no Manic Pixie Dream Girls here, and no pedestals. Women are just people. (Another, male author who does this reasonably well is China Mieville.) Kylara has help from people of both genders, but when the threat is greatest she saves herself.

The book isn’t perfect. Its danger is relatively low-key, and Moon’s descriptions of her universe’s laws and politics can get dry. The action takes place mostly inside one star system, and it’s not quite clear what kind of world exists outside of it. The book can get slow, but for someone who was tied of meteoric rises and wanted something that felt a bit more realistic, I thought it was excellent.

Trading in Danger has its flaws, but I was very surprised to learn that it hasn’t been praised much for its level portrayal of a female hero. This is the first book in a five-part series, and I look forward to seeing how Kylara grows and moves forward.

Megan Crouse, of This Blog Is Full of Words, reviews and covers Star Wars television for FANgirl. She has also published poetry and short fiction. She is currently working in journalism and paying a lot of attention to pop culture, fandom studies, and Darth Maul. You can follow her on Twitter @blogfullofwords. 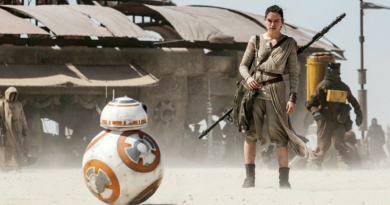 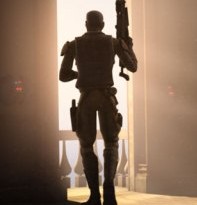 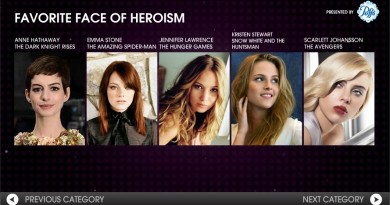