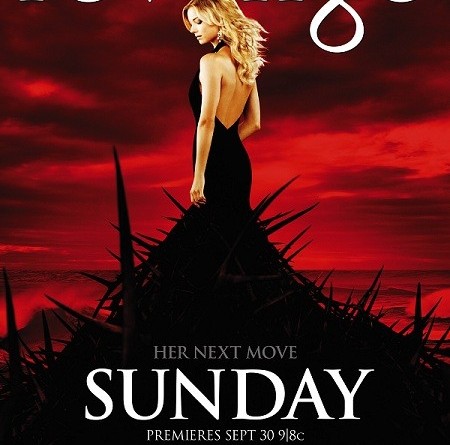 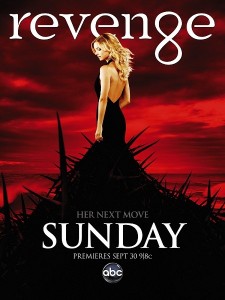 If you said “television shows featuring a blond female protagonist who is generally the strongest/smartest/best person in the room,” you’d have it exactly right!  Other shows have come and gone, but for some reason I find I’m drawn to shows which subvert the norm of having a white dude as the most admirable and astonishing individual of a group.

Thus, I probably should have given Revenge, which features a blond female protagonist named Emily Thorne (played by Emily VanCamp) who is always the smartest and often the strongest person in the room, a second glance before dismissing it last year.  However, for many reasons – I haven’t read The Count of Monte Cristo, which serves as the show’s inspiration; I don’t follow any of the actors or producers involved; and I don’t actually watch much television – I gave it a miss.

Perhaps the biggest reason I skipped it, though, is summed up in a quote from Batman Begins: “Revenge is about making yourself feel better; justice is about harmony.”  Most of the shows, films, and books I’ve seen centered around revenge have been moral fantasies with impossibly pure heroes and impossibly evil villains, where the avenging angel hero sets things right and everything is good – in other words, glorifying selfishness and imposing a personal definition of justice over societal harmony.

But when I actually gave Revenge a chance, I saw that not only does it acknowledge the truth of the Batman quote, but there are also more connections between Emily Thorne and the Dark Knight than might first appear.

Here are six plus one reasons – six serious, one humorous – how Emily Thorne is actually Batman:

1) Emily’s parents were taken from her at a very young age by powerful people, creating a sense of incredible rage and thirst for revenge which she channels into creating a false persona of an incredibly wealthy, intelligent, and genteel philanthropist/playgirl while secretly working for the downfall of the evil that destroyed her father.

2) As part of her plan for revenge, she dons black garments and sneaks around at night, performing violent acts.  As part of this violent persona, she is skilled in armed and unarmed combat. 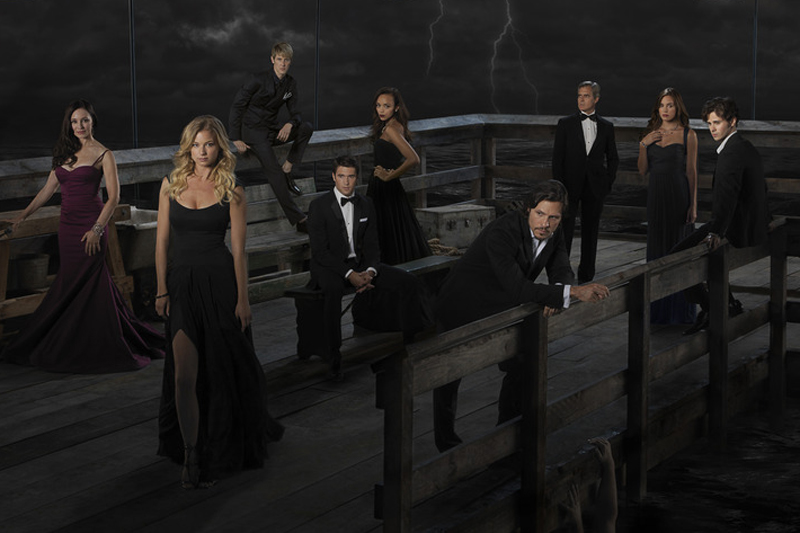 3) Just as Batman has old butler Alfred to raise him and provide words of wisdom, Oracle to provide technological support, and Robin for comic relief, Emily has all three rolled into one in the person of Nolan Ross (played by Gabriel Mann), an eccentric billionaire technology designer.

4) Batman was trained by Eastern mystic Ra’s al Ghul, while Emily travelled to Japan to study under Satoshi Takeda (played by Hiroyuki Sanada in season 1, Cary Hiroyuki Tagawa in season 2).  And just as Ra’s forces Batman to chose between his own extreme brand of justice and protecting the corrupt city of Gotham, Takeda forces Emily to either choose his own extreme methods of revenge or find her own way alone.

5) Though Batman is functionally just a man with a lot of technology, money, and training, his real superpower is what fans call “prep-time” – thorough research and planning that allow him to overcome any obstacle.  Similarly, Emily constantly collects information, collates it, and plans ahead for all contingencies – including removing bullets from her gun in case someone threatened her, and having redundant escape strategies in case of capture.

6) Finally, Batman has one vital rule: no killing.  Though Emily has a much more plausible, if morally compromised, reaction to her tragic backstory – rather than becoming an impossibly pure guardian of justice, she’s come back seeking revenge – when it comes down to it, her commitment to the ideals of her father won’t allow her to become a murderer. (So far.)

1) Nolan outright calls Emily “Batgirl” in the first season finale.  Thus it is so!

Batman is the ultimate fantasy for many – dark but principled, violent yet restrained, rich, cool, and smart. Just enough power to make you want to be him, with just enough virtue to be admirable and not enough restraint to turn people off.  But when it comes to similar characters on the female side, you have a couple of women who are mostly knock-offs of Batman without his charisma; much as I enjoy them, both the Huntress and Batwoman function this way. And most importantly, they don’t get to be the smartest and strongest person in the room – especially since Batman is usually there with them, thus filling that role.  Revenge provides an example of a female Batman figure without reducing her to a knockoff or attempting to dilute her power.

Yet for all her intelligence and righteous fury, Emily Thorne too must, as Ra’s al Ghul tells Batman, “become more than a man” to set things right.  And since she is on a path of self-determined justice, it has serious consequences on her moral and emotional life – just as Batman, despite his sidekicks, butler, wealth, and intelligence, must remain alone.  We shall see if Emily becomes more than a woman, as she continues to navigate the thorny road of revenge.  Whichever she chooses, I will continue to follow, hoping that while justice is served, her self will be healed and made whole in the end – without losing her awesomeness.

Ian Miller didn’t see Star Wars until he was ten, but as soon as he did (on borrowed video-recordings) he thought X-wings were the coolest thing ever. When the X-Wing books came out a few years later, he read them voraciously – which is pretty much the way he read anything. Such habits inevitably led him to choose the only career he could think that would allow him to read for a living – teaching English. Today he enjoys proselytizing his students for Jane Austen, removing “to be” verbs, and slipping Star Wars references into his lectures. He can be reached at millernumber1@gmail.com, or at his blog at We Read To Know We’re Not Alone. 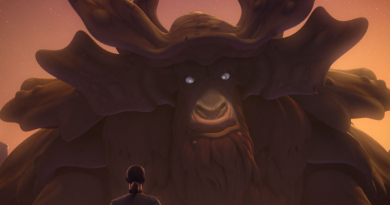 3 thoughts on ““Become more than a man”: Revenge and Batman”