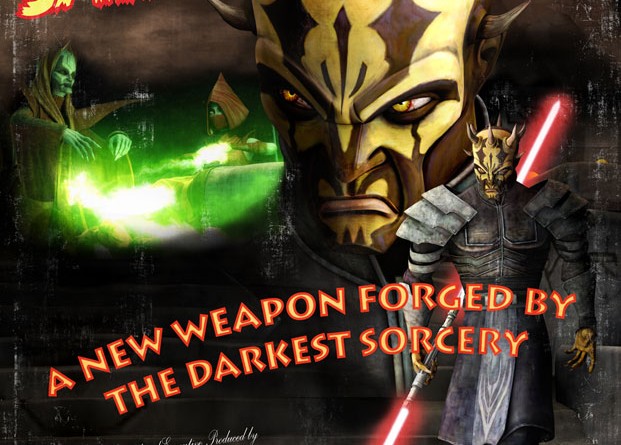 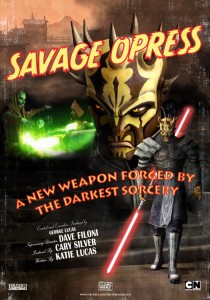 As I write this I’m sitting at the Atlanta airport waiting for my flight home, and trying to distill today’s adventure into 500 words or less*. I started early. By 5 a.m., the dogs and cats were fed. By 11 o’clock, I somehow managed to run a few errands, give Ganner the horse a carrot, and work a few hours. After all that, my one-day round-trip to Atlanta began.

It’s now approaching midnight. The back aches, I’m bone-tired, and my feet hurt from walking around Atlantic Station.  I also know there’s a long workday ahead for me tomorrow. None of that really matters, though, because the experience was – in the words of my nephew Finn who also happens to be a big Clone Wars fan – awesome!

Riding up the escalator into the Regal 16 lobby reminded me of walking into Star Wars Celebration – 501st clonetroopers and Rebel Legion Jedi welcomed the guests. R2-D2 toodled around, making equal part friends with the kids and the ladies. After a lot of picture taking, with free popcorn and soda in hand, everyone settled into their seats.

An executive from Cartoon Network kicked off the festivities with some giveaways, including cool toys and a Droid phone for one lucky contestant. The Memory Better Than Threepio Award goes to the young man who rattled off all five names of Domino Squad. Most impressive! (Leland Chee, watch out; these kids are good.)

From the moment I had seen the little snips of TCW previewed at Celebration V, I was praying to see more Clone Wars on the big screen.  Yesterday my prayer was answered, and I wasn’t disappointed.

After a stern warning in the pitch black from Captain Rex – gotta keep Republic secrets out of the hands of Seppie spies – the long-anticipated screening started with a bang.  Remember how the epic space battle at the beginning of RotS left you breathless? Well, here we go again straight into the heart of an epic space battle.  The pilot banter for Obi-Wan and Anakin in the middle of a furball is spot on; the visuals of the lightsaber battles exciting. I found I was leaning up in my seat within the first few minutes as the plot sucked me in. 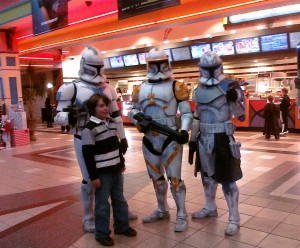 The breathtaking battles continue throughout the three TCW episodes that comprised the theatrical screening, and they’re tied together in a neat bow made of juicy tidbits from the EU and clever allusions to the OT and PT.  One particular scene is very reminiscent of Luke’s time with Yoda in ESB, and while I don’t want to spoil it, I think the juxtaposition used in TCW is quite powerful. These make-you-think morsels are sprinkled throughout the three episodes, keeping the fans involved and helping connect the story backward and forward within the Star Wars universe.

While there has been criticism from some quarters about TCW slowing down earlier in Season Three with episodes focused on the political machinations of the war-torn Republic, I’d argue that it’s hard to weave a worthy tale – especially a worthy space opera – with only lightsaber duels and space battles.  Episodic television in 22-minute bursts requires a completely different cadence than 150 minutes of blockbuster movie-magic.  Although not as detailed on point-of-view as a novel, television demands more character development, which is what we’ve been given this first half of the season. To my mind, if the first ten episodes had plowed full-throttle like last night’s three episodes, there very well may have been complaints that not enough story was being told. As the second half of the season begins, we’re starting to see how the gradual weaving of character arcs in the earlier episodes gives more depth to what’s to come, and allows the story to begin to snowball into a controlled frenzy more like what fans of the OT and PT are used to seeing.

Movies require the use of some conceits in their narratives; a well-made movie will leap forward with the plot and the viewer will go with the flow without ever noticing the elements that got skipped past.  In these TCW episodes, viewers will see a return to this style. At the same time, some clever writing manages to flesh out characters, new and old.  I have to say the story of Savage Opress was not what I expected walking into the theater. I didn’t expect to empathize with him or pity his lot in life. But as Yoda says, “You will.” In any good story there has to be a reason to care about our heroes and a reason to root for their victory, but what I took away from the screening was that we also need to understand the villains and what makes them tick, more importantly, what they really want.

Speaking of villains, if at all possible, I suggest viewers do their best to avoid the spoilers from these episodes and just enjoy the journey when they air on television in January.  I was spoiler-free for the screening, for the most part, and I’m glad I was. A well-placed guess upon hearing of a twist got me an inkling of confirmation that I was on the right track.  After reading discussions forums immediately after the screening, though, I think all the online uproar is much ado about nothing. Really the twist is nothing more than a tease at this point – and it’s the millions of questions it posits that make viewers want to understand it.  The tease could go any number of places, and I think it’s safe to not assume or jump to conclusions.  As a writer, my mind spun down about a ten different angles right away.  Then after thinking about the substance of each episode, I realized that there was plenty of groundwork laid for any number of storytelling directions. Things are never what they seem… especially where Mother Talzin is concerned. 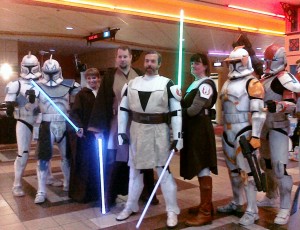 My favorite part of the story was the Nightsisters. They bring a different type of power into play – magic, as opposed to traditional Jedi and Sith Force abilities. They are alpha female warriors that take sisterhood to a whole new level. As an EU fan, I loved the opportunity to see a planet like Dathomir that I’ve only been able to imagine in my mind. Since the first glimpses of these episodes at Celebration V, some EU fans have fretted that this story line would demolish the current EU continuity, but as I watched it unfold I thought the story was quite respectful of what’s come before TCW.

There is so much more I’d love to discuss about the story design and the themes they’re exploring but I think it’s only fair to wait until everyone has seen it. These episodes confirmed for me that George Lucas definitely chose the right guy for the job when he picked Dave Filoni. And once again, Katie Lucas proved she understands how to build characters into her stories that are multidimensional and driven by motivations and desires and not just the plot.

For what it’s worth, I think the Season Three sneak peek at the end of the screening had far more interesting teases than the episodes themselves. I’m eager to see what else Lucasfilm has in store for the fans as Season Three winds to a close. Even leaving with so many open-ended questions, when the sneak peek ended, I felt like I had eaten a hot fudge brownie sundae with whip cream and a cherry on top. If you’re familiar with my blog, you know that’s the highest compliment I give.

Overall, what I loved about the screening experience was the feel of being at a Movie Event. I really hope we get to see more of TCW on the big screen. And with two more full seasons to follow, maybe we will. What made me happy as a fan was that Star Wars vibe I felt in the theater. When the lights went up a lot of people were smiling – kids, mothers and fathers, crazy uberfans like me. There was something for everyone – battles, lightsabers, heroes, villains, brothers, sisters, clones, Sith, a long time ago in a galaxy far, far, away… 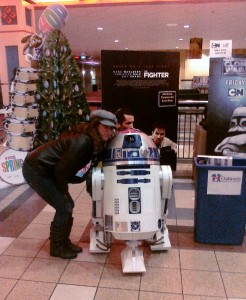 Everyone should be looking forward to Friday, January 7, at 8:30 p.m. (note the time change) on the Cartoon Network. The Clone Wars delivers a visually stunning package that takes the viewers for a thrill ride. For the uberfan, while you’re waiting anxiously, get the Season 1 and 2 Clone Wars DVDs, dust off your comics, and crack open a few old books.  Do some research – because the creative forces behind this episode did.

Author Notes: Tickets for the Clone Wars screenings were free, but attendees were asked to donate unwrapped toys for disadvantaged children. From the looks of the toy donation bins, the children came out the winners.

The ladies were making our mark. I saw a lot of Her Universe products: three C5 ESB necklaces, one Rebel necklace, one Padmé Nouveau shirt, one Luke shirt, one I Know shirt, one Star Wars Burnout, two Bonnie Burton hoodies.

A small boy was overhead as he exited the theater, “Thank goodness they finally put a Commando in the show.”

A mother a few rows behind asked after the screening, “Who exactly said this isn’t for adults, anyway?”

December 14th update: EW.com has released the trailer that aired at the end of the theatrical Clone Wars screening..I

*The author tried and failed to meet a 500 word limit. This blog clocks in at just over 1500 words… 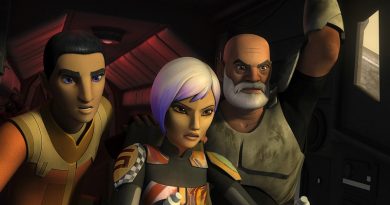 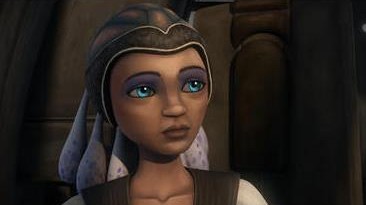 Hondo: Back to Fight Another Day!