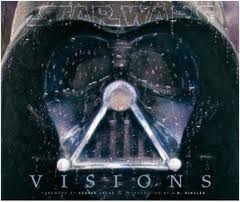 The concept behind Star Wars Art: Visions is fascinating: invite artists, established talents as well as rising stars, who wouldn’t normally create Star Wars artwork to give their own unique takes on the saga in their own personal techniques and styles. Fans who’ve attended the Star Wars Celebration conventions may recall the charity fundraisers with a similar concept, such as The Vader Project at Celebration IV in Los Angeles, which have produced some truly inspired and ingenious contributions. The Visions book is equally successful at providing a whole new artistic perspective on Star Wars.

There are over a hundred contributions to Visions, so it’s impossible to comment on each one. And I’m no art critic, so I can’t really speak to the technical merits of the work as such. But I can give my impressions and reactions as a Star Wars fan, and I can sum it up in one word: fantastic.

The art in Visions runs the gamut from traditional-looking portraits that just happen to feature a Star Wars character to wacky surreal paintings that would fit right in at any modern art gallery. That’s part of what makes Visions so much fun: I felt like I was taking a stroll through an art museum with all manner of art from across the ages, yet everything was Star Wars.

Three of my favorite character portraits were Daniel Greene’s Princess Leia (p20) and Donato Giancola’s, Obi-Wan Kenobi (p120), each based on iconic attire from Episode IV. I also really like Carl Sampson’s Padmé Resplendent with Naboo Mandala (p82), which looks like something that ought to be hanging in Theed Palace.

The core of the saga is the tragedy of Anakin Skywalker and his terrible years as Darth Vader. Naturally, many of the artists used that as their inspiration. Steven Levin’s Portrait of Darth Vader (p130) is a chilling image of the Vader suit with an unmutilated Anakin’s head and face, holding the helmet on his elbow, while Massey’s Regrets (p81), which appears on the cover of the book, is a perfect symbolic representation of what Vader has lost. One idea about Vader I’ve always liked is the notion that Padmé would remain central to his thoughts long after his encasement in the black armor. Two paintings that really touched that theme effectively are Kirk Reinert’s Vader’s Dream – A Visitation from Padmé (p43) and Enki Bilal’s Never Ending Fight Against Darkness (p91). And Robert Bailey’s, Now My Enemy (p108) provides a creative glimpse at a possible Jedi Temple showdown between Vader and his erstwhile apprentice, Ahsoka Tano.

Some of the other art in the book is fun because it looks just like the kind of painting we might see in the real world, except with a Star Wars twist. Randall Wilson’s Star Destroyer in for Repairs (p30) could just as easily be a naval drydock painting, or Bill Patterson’s Runaway Slave (p49) could depict a racecar in motion. Alex Ross’s Empire of Style (p23) would fit right in among a gallery of war posters, and Scott Fischer’s Fem Trooper (p37) would make a great movie poster or comic cover.

Another interesting feature of Visions is that it’s another in a line of recent Star Wars products aimed at a grownup market, not younger fans. Nowhere is that more apparent than in some of the contributions with a more adult tone, like the scantily clad Leia in Julie Bell’s & Boris Vallejo’s Forest Rancor (p71), or the classically tastefully nudity in Evan Wilson’s Sleeping Aayla (p112) and Stephen Early’s The Struggle Behind the Mask (p114-115).

Finally, we couldn’t have Star Wars without a little bit of humor in the mix too, and Visions lives up to the challenge. Two of my favorites are Will Wilson’s Dawn of Maul (p80), with a portly Sith infant, and Peter De Seve’s Easy Being Green, It’s Not (p75), an adorable pairing of Yoda and Kermit the Frog.

For Star Wars fans who are also students or fans of art of all types and styles, Visions is definitely worth checking out.