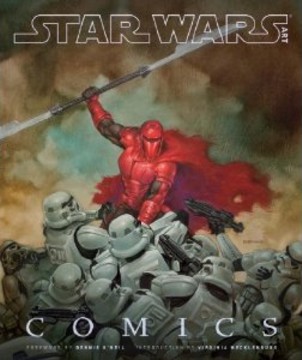 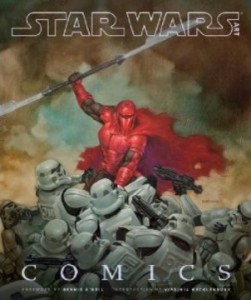 George Lucas and the Lucasfilm Archives have opened their respective vaults to bring fans an exceptional addition to the Star Wars Art book series with the release of Star Wars Art: Comics. During an interview for The Official Star Wars Blog, the book’s Executive Editor J. W. Rinzler said: “George wanted to highlight the best of Star Wars comic art, including a few new commissioned pieces from top comic book artists, old and new. His main objective was to present this comic book art as fine art.”

This book not only achieves that goal but succeeds on several different levels.

Mr. Lucas, this is a fine art book.

As a multimedia artist, I appreciate the wide variety of styles and skills that shine on the pages of this coffee table book. For example, a stunning, unpublished pencil drawing of the dueling Qui-Gon and Darth Maul by David Michael Beck appears on pages 94-95. Beck’s attention to detail, action, and story are things we have come to expect from such a top-notch comic artist. But in addition, I was immediately struck by his rendering of the folds in the combatants’ robes. They exhibit an elegance of movement reminiscent of the beautifully draped fabrics found in master artworks from the Romantic period (spanning the late 18th and early 19th centuries).

There is also a wide range of other artistic styles, including the close-to-photographic realism in images such as the moody Darth Maul plate by Hugh Fleming on page 99, and the famous, fabulous Legacy-era Jan Duursema image on pages 152-153.

The quality of artwork selected for this book is astounding, as is the care taken in reproducing each plate. 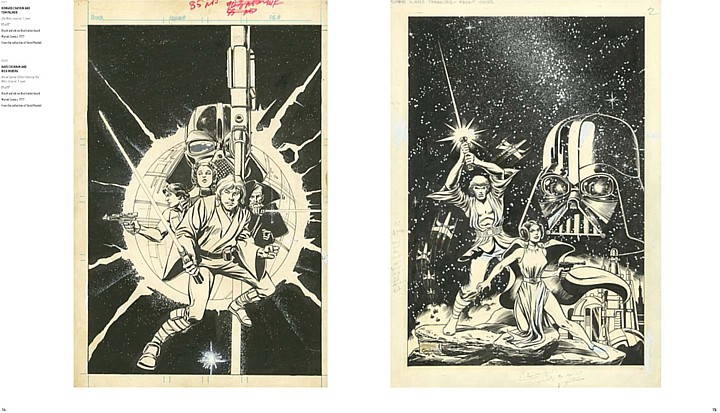 This is also a history book.

From before the first Marvel comic was created to newly-commissioned comic art, Comics spans the existence of Star Wars. Some of the early plates are reprinted with original margin notes by the artists intact, reinforcing the book’s historical approach. In addition, the lack of page-by-page commentary supports the Lucas concept of showcasing comics as fine art as well as storytelling imagery that requires little or no explanation.

This is a book for artistic reference.

Again, as an artist (though not a graphics specialist), I find inspiration in Comics. The ability to compare so many brilliant artistic styles or grayscale and colored images in a single volume is efficient and helpful. The book has already sparked creative ideas for me and has what it takes to influence the work of many others.

For this reason, I hope that budding comic artists see the value in having Star Wars Art: Comics on their bookshelves.

This is a book that contains surprises.

Along with previously unseen Star Wars art, I found two particular delights when I opened Comics. The first literally came to light when the dust cover fell away and I discovered what the actual hardcover looks like. I don’t want to spoil that for anyone who has yet to see it, but I immediately felt it should be displayed as a piece of art.

The second surprise came at the end, alongside the artist biographies: an interview excavated from the Lucasfilm archives that took place before any of us had even heard of Star Wars. Again without revealing too much, I will say what fun it was to read that a famous original Marvel artist was thinking of trying color for his comics back then by using “these new Pentels” specifically for Star Wars Issue #1. Today’s artists will tell you that Pentel is one of the most visible manufacturers of coloring implements in the world.

This is a difficult book to criticize.

Star Wars Art: Comics is designed exactly as Lucas requested. There are very few dialogue balloons on the images, leaving each work of art to tell its own story. This was intentional, and knowing that I made an effort to “read” the stories on these pages. It was an easy task with such a wide variety of evocative renderings. For example, on page 45 there is an irresistible one-off cartoon by Sergio Aragonés and Dave McCaig and a haunting grayscale Manga-Vader plate by Hiromoto-Sin-Ichiacross pages 128-129. I am also fascinated by the depth of emotion in the eyes of Lord Grievous by Tom Hodges on page 110 and was particularly moved by the image of an agonizing attack by Sand People from Ken Kelly on page 20.

This second book in the Star Wars Art series is at least as good as or better than the first volume, Visions. I feel that Star Wars Art: Comics meets or exceeds its objectives largely because I agree with George Lucas’ ideas about the vibrant nature of comic art and the incredible skills of those who create it.

The new and historical works reproduced in this book originated from a number of sources. I can’t help but be thankful that Star Wars fans – the foremost among us, George Lucas – tend to hoard franchise materials. We owe a debt of thanks to those contributors for being true Star Wars packrats, and also to the people who envisioned this project for their careful stewardship.

Mary Sheridan is a former Registered Nurse who specialized in Trauma and Emergency medicine. She now enjoys second and third careers as a multimedia artist and freelance writer. When she doesn’t have a project deadline, Mary likes to hunt for beach glass or revive memories of her days as a competitive show rider by finding a horse in need of exercise.