A New Dawn marks the beginning of a new era in Star Wars books. This is the first book to come out under the guidance of the Lucasfilm Story Group, responsible for coordinating all Star Wars stories going forward no matter the medium. All the previously published books of the Expanded Universe are now known as Legends. 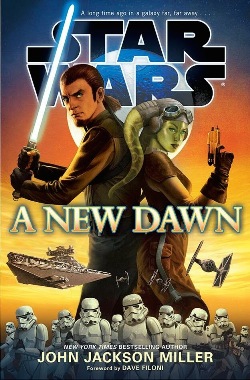 And while I understand why this decision was made and applaud the idea of better overall coordination, the April announcement left me heartbroken. I’ve spent many years of my life with those now legendary tales. I didn’t always love where some authors took the stories, but I came to know those characters of the post-Return of the Jedi era inside and out. Now their fates are up in the air. They may reappear as I knew them, in another form, or never again – with no known date when we’d know for sure. So I thought that this might be my exit point from reading anything new about that galaxy far, far away.

One person’s involvement made me decide to at least give this relaunch a chance: John Jackson Miller. I enjoyed his previous Star Wars novel, Kenobi, as well as his original story, Overdraft: The Orion Offensive. I’ve come to know him as a thoughtful writer who enjoys exploring what happens when someone has to operate in an environment different from what they’ve always known.

In A New Dawn, several characters fit that bill. Much like Kenobi, this book also makes the Star Wars galaxy a richer place. Set on and around the miserable, mining-driven planet of Gorse and its moon Cynda in the early days of the Empire, the story follows Kanan Jarrus, a former Jedi who survived the purge and now tries to lay low and keep to himself. He finds that a bit more difficult with the further changes the Empire brings to Gorse, as well as with the arrival of Hera Syndulla. Hera is a Twi’lek on her own under-the-radar mission, only looking to gather associates if they’re the right kind of beings for her cause. These two have an interesting dynamic. He acts like he has nothing to lose and she like she has everything to lose. She’s self-sufficient and full of ideas but open to Kanan’s plans. They keep up with each other pretty well, but she’s so good at what she does it’d be easy to mistake her as a former Jedi instead of him.

The Empire’s lead efficiency expert, Count Denetrius Vidian, is also in-system to up the levels thorilide mining for use in expanding the Imperial fleet of Star Destroyers. Vidian is an interesting and sometimes pretty scary villain. He’s made a name for himself giving business advice. He’s also a cyborg, given a second chance at life after an illness ate away at his skin and vocal cords. His mechanical enhancements make him stronger, let him communicate and gather data faster, and he’s always planning for the next step. But that’s not the scary part. He only values the bottom line and has no regard for the lives of others. He does not forgive. He does not forget. Sometimes he doesn’t even get that angry. He just plows through to his goals at any cost.

Providing the military support for Vidian’s mission is Captain Rae Sloane, the interim Captain of the Star Destroyer Ultimatum. She’s risen to her rank by merit and is part of the New Imperials – those who became adults under the Empire. Losing her patience for the older military leaders, Sloane tries to balance her own desire to do right by her job with her drive to move up the ranks and be in charge while working to dodge anyone who is looking to undermine her. By far the most likeable of the book’s Imperial lot, I wouldn’t mind seeing her pop up in other stories down the line. She’s not the only female Imperial in the book, either; it also includes other female officers and female Stormtroopers. Zaluna is a female Sullustan who runs a data collection and surveillance group that’s been taken over by the Empire. The head of the mining operation Kanan works for is a female Besalisk. John Jackson Miller doesn’t add neon arrows saying “Look at what I did with these characters! They’re female!” It’s presented naturally. This is the way the galaxy is. And it’s a pretty nice diverse balance that, while appreciated, isn’t surprising as Miller has shown it in his writing before.

It is kind of strange, though, to watch Miller’s equal opportunity approach clash with Kanan’s approach to Hera. Kanan treats her as a mystery to figure out and spends a good deal of time contemplating her beauty. Fortunately he is impressed by her skills as well, and is open to letting her take the lead and the pilot’s seat. And to be fair, Hera does purposely keep information close to the vest for her own safety. Together, these factors make it more of Kanan’s story than the marketed story of when these two characters of the upcoming Rebels TV show first crossed paths. It also makes it harder for most of the book to understand why Hera would want Kanan around.

All of these characters seem fully formed. They don’t just exist to serve a plot point in the story. They have lives that extend beyond any function here. The story itself has some good banter and action that definitely feels at home in Star Wars. It’s a fairly violent story, too, with a high body count that luckily never gets ultra-graphic and never seems way off base considering the violence of the films. Sometimes opportunities present themselves to our heroes that are a bit too convenient, especially when they need to blend in. Other times events get pretty predictable. And all the point of view shifting makes the book feel a bit too long. But there’s clearly a lot of thought put into showing how the Empire actually works and how it affects a group of citizens, businesses, and military alike.

While it probably isn’t required reading to understand the Rebels television show, A New Dawn is an entertaining read on its own and promising start to the new era of Star Wars literature.

Kay grew up wanting to be an astronaut. After seeing Star Wars, she wanted to be Princess Leia, Han Solo, and an astronaut. Life’s taken her on a bit of a different path for now, but she’s still a Star Wars fangirl at heart who enjoys surprising people with how geeky she really is. A voice actor, photographer, and artist who also consults in communications and marketing, Kay spends the little bit of free time she has reading, dancing around, writing, learning and, of course, making pew pew noises. You can follow her on Twitter.

2 thoughts on “Review of Star Wars: A New Dawn”