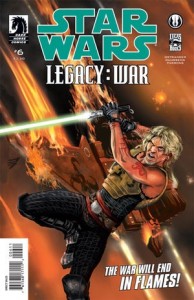 A couple of months ago when I reviewed the first and second issues of Legacy: War by John Ostrander and Jan Duursema, I gave those two comics a 9.5 out of 10 and didn’t imagine it could get much better. I very rarely give anything a 10 – although I have – because generally I’m willing to concede that each story has its flaws. Well, this is one of those exceptions. Truly, Legacy: War closes out its final issue pretty close to perfect.  The only detraction, if there is one, is the mere fact that this was a whole heap of great story packed into only six issues. Really, Dark Horse, this was at least twice as many issues of pure gold for fans! With that little rant off my chest, let’s talk about the story.

After losing the battle at the Jedi Temple, the remaining Jedi join forces with the Galactic Alliance and Emperor-in-exile Roan Fel in an attack on the Sith Empire’s seat of power on Coruscant. Again, the epic winner-take-all slugfest serves as a backdrop for the deeply personal stories that have been interwoven throughout this series.

Much like Luke’s showdown with Vader and the Emperor at the Battle of Endor, Cade’s fight isn’t just with the Sith, but with the personal demons that come with the name Skywalker.  Is there still good left in him? Can he become a Jedi like his father before him? Cade’s dilemma is juxtaposed against Roan Fel’s desperation in the face of certain defeat. In the seeming absence of hope, can Roan be true to his duties as an Imperial Knight?  In the end it’s all about choices.

Ultimately one of them makes the correct choice and the other doesn’t. Both of these men, though, have an incredible network of friends and allies who right their wrongs and bolster their weaknesses, which to me is the most powerful message of the Legacy series. Great sacrifice will never happen in the absence of hope and love, and when you read the last page of the series it’s obvious that Ostrander and Duursema really get Lucas’ vision of Star Wars and, more importantly, the role of the Force.

Legacy: War has been some of the best storytelling to come out of the Star Wars Expanded Universe in a long time.  The heroes and villains are rich and vibrant; the characters are diverse in look and action. When read slowly and with a keen eye, the panels reveal such careful thought for each line of dialogue and each stroke of the pen or brush that the comic itself creates a unique beauty of vision and story in combination.

If you’ve been craving some great Star Wars, Legacy: War is it. I said before this issue came out that I wasn’t afraid of how it would end, and the series exceeded even that high expectation. Now that we have a complete series I’ll reiterate my brownie sundae rating: this is a decadent brownie with lots of extra hot fudge and ice cream, and yes the whip cream and cherry on top. My only beef against the series is its truncated denouement, but I’m not going to hold that managerial foolishness against Legacy: War, because it does everything else right.