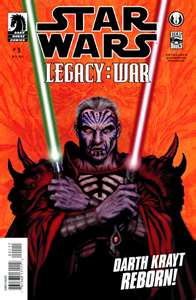 The second issue of Legacy: War was released in comic bookstores last week. By the time I got there, it was sold out.  The salesman kindly pointed out they had plenty of copies of the first issue of the new Darth Vader and the Lost Command comic. I passed; my interest wasn’t just getting a Star Wars fix, but rather a desire to delve into great storytelling. Legacy has been delivering that in spades since issue #0, and with the War arc it’s only getting better.

The story designed by John Ostrander and Jan Duursema leaps ahead in the Star Wars timeline nearly a hundred years from the tales being told in the  Expanded Universe novels currently, and it reveals a galaxy in chaos. The Sith and the Empire are engaged in a struggle to wrestle ultimate control over the galaxy; the Jedi Order and the Galactic Alliance are pale shadows of their former selves, fighting simply to survive, let alone protect their citizens.

Darth Krayt, once believed dead, reappears at the start of this series – more fearsome and terrifying than previously. In the first issue, the internal power struggle within the ranks of the Sith sets the tone of an epic battle. At the same time, the remnants of the Empire, under the leadership of Emperor Roan Fel, come to terms with the loss of Antares Draco, leader of the Imperial Knights.

Within the story arcs of these grandiose battles, Ostrander and Duursema weave intimate and personal portrayals of characters dealing with loss, self-discovery, and betrayal. Cade Skywalker finally shows signs that he may embrace his heroic destiny, yet the Jedi don’t seem eager to bring the heir to the Skywalker legacy into their fold. The Emperor’s daughter Sia Fel struggles to remain true to her duty while grieving the loss of her lover. And we see more of the personal sacrifice buried deep within the many faces of Nyna Calixte. 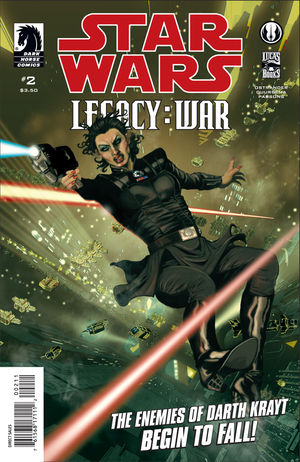 All of these personal stories play out on the page not only in the written word but also through the painstaking detail crafted into each pane. The hard lines of many years caught up in the gamesmanship of Imperial politics are literally cut into the sharp angles and hardened features of Nyna. At times Sia appears softer, less cold and rigid, but at other times her features give the impression they’ve been cut from steel. These are women that female fans can empathize with and, more importantly, understand. They make hard choices, but for reasons that are relatable.

Ostrander and Duursema have managed to straddle the wall often erected in the comic book world that keeps female fans at bay.  Legacy: War is simply beautiful for both the art it presents and the story it tells. It is a must read for all Star Wars fans. I can only hope that Dark Horse reconsiders its inexplicable decision to cancel this series and gives us much more Legacy to come when War is concluded; but if not, I’m confident Legacy will stand the test of time as one of the true highlights of the entire Expanded Universe. Legacy offers the best we can hope for: a brownie sundae with lots of extra hot fudge and ice cream, and yes the cherry on top.