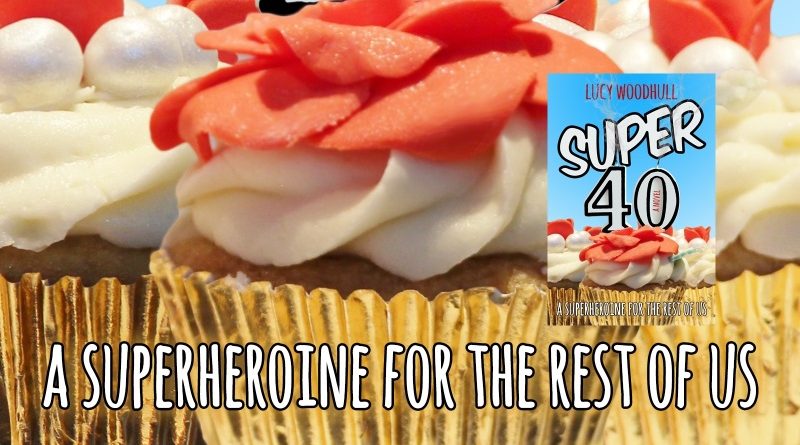 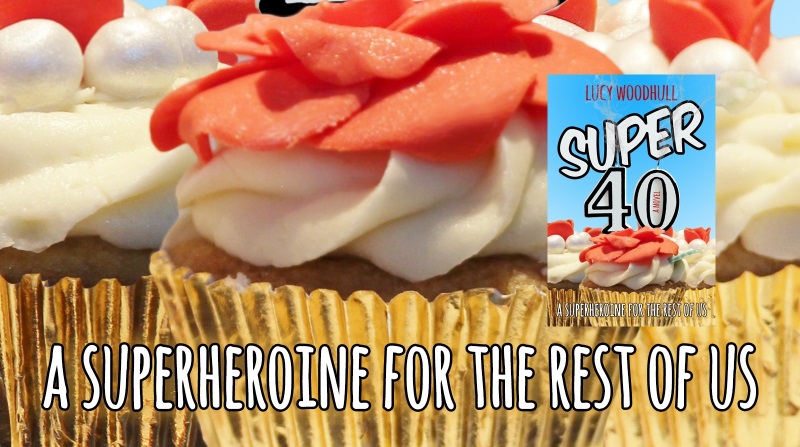 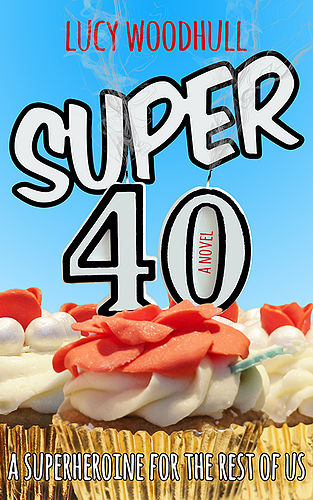 My latest novel is a superheroine adventure called SUPER 40. Super 40 is about Shannon Johnson, a broke, divorced, and forty-year-old woman who suddenly gains the ability to shoot menstrual cramps. No, really. Shannon has to learn to climb up from rock-bottom and decide what to do with the rest of her life—and helping other women with her extraordinary and hilarious power is what she chooses.

I’m forty-one. And, contrary to popular culture, I have not melted into a sad glop of unsexiness, only to be tripped over by my better, younger sisters. Sure, my L3 vertebrae has seen better days, but I’m not gray and decrepit! At least I think not. I dye my hair in order to never know when I go gray.

You’re probably as tired of popular superheroine stereotypes as I am. Staring with the fact that Microsoft doesn’t even think “superheroine” is a damn word. As written by mostly dudes, superheroines possess amazing powers such as the ability to sprint around town in five-inch heels all night long! They’re able to leap tall buildings without a sports bra! And I, personally, would like to know what kind of alien eye makeup Black Widow wears, because it never seems to pool around her nostrils. Not even when the ship she’s on melts.

Oh and, of course, they’re almost all twenty, no matter how crusty Iron Man is looking these days.

To combat this great oversight, I put on my horrifying granny panties, soaked my dentures, and created a superheroine over forty. I needed to blow away the idea that women over thirty-five are useless, worn out, obsolete, non-sexual, and without agency. Just “old ladies” or “moms.” (Or, really, “not fuckable,” because we all know that’s what male creative executives think.)

Of course, you and I know there’s nothing “just” about any woman. Hell, Carrie Fisher proves my point. So although I may be a bit older that you, dear reader, young fangirls turn into older fangirls—and we all deserve to see ourselves kicking ass and saving the day.

My superwoman Shannon doesn’t wear sweaty, boob-squishing leather, or run around in high heels. Who the hell has time for that? Shin splints are a bitch! And swampy crotch leather is just gross.

Shannon is frumpy sometimes. She’s glamorous sometimes. She vacillates between plus and straight sizes. She’s a normal woman who decides to be extraordinary in a pair of cupcake pajamas, even though she’s scared out of her mind. (Cupcake pajamas because they’re comfy as hell, and also feature cupcakes.) The real world is full of ordinary women standing up for what’s right in the face of long odds, especially in 2017, and it’s about damn time popular culture reflected that.

The truth is—we’re all our own superwomen. We keep going after being dumped. When we’re broke as hell. When we get mansplained into that proverbial puddle of glop. When we miscarry. When we lose and lose…and then lose some more. We keep going while wearing those heels, and makeup, because we know we get taken more seriously when we perform “woman” for the teeming masses. Or is it less seriously? We keep going when we transition into womanhood because it’s what we know deep in our hearts to be the truth. Or when we’re so full of PMS bloat, we can barely move. We keep going in a hostile fucking world.

I’m a superheroine at least five times a day, and you are, too. Even if you don’t look like Scarlett Johansson. That’s why I wrote Shannon, and all the other characters in SUPER 40. They defy the idea that to be “super,” a woman needs to be a femme-bot. And that’s the popular idea of all women, right? You’re a femme-bot, or you don’t exist.

Deep in my heart, I needed to defy what a “woman” is. I wrote this book while in grief over my infertility. Let me tell you, nothing makes you feel like less of what they tell you a woman is then not being able to have a baby. You know in your head that birthing a child has nothing to do with being a woman. After all, I would never think that about another woman—straight or gay, trans or cis. But gender is hammered into your head from the moment you’re born, and it’s so difficult to unlearn that internal drumbeat.

I put Shannon on her own journey to self-love after infertility for my own benefit. I needed a superheroine, so I made one. And she became so much more than the story of a bad medical diagnosis. She became my love letter to all the women of the world. Because part of my story might be infertility, but part of yours might be disability. Or poverty. Or religion. Or race. Or an exploration of sexuality or gender. Or a combination of a hundred different unique and beautiful things that make you you. A hundred things that society tells us we’re doing wrong.

Sci-fi is the medium for SUPER 40 because, well, come on—shooting menstrual cramps is my fantasy goal in life. But also because those of us on the lower rungs of society dream of that glorious future not only full of jet packs, but equality as well. It’s one of the central tenets of science fiction.

I mean, didn’t we all fangirl over that cast photo from the Han Solo movie? The one with two female characters…and six male? The one featuring one person of color?

Ladies save the day in SUPER 40, guaranteed. And not just white ladies.

Look at yourself today, dear reader, and know that you are super. And that your butt looks cute as hell, because come on!

Lucy Woodhull has always loved le steamy romance. And laughing. And both things at the same time, although that can get awkward. Her motto is “Laugh and the world laughs with you, cry and you’ll short-circuit your Kindle.” That’s why she writes funny books, because goodness knows we all need to escape the real world once in a while. She believes in red lipstick, equality, and the interrobang. Hailing from Southern California, she daydreams with her husband and the ghost of a very fat cat who doesn’t like you.?