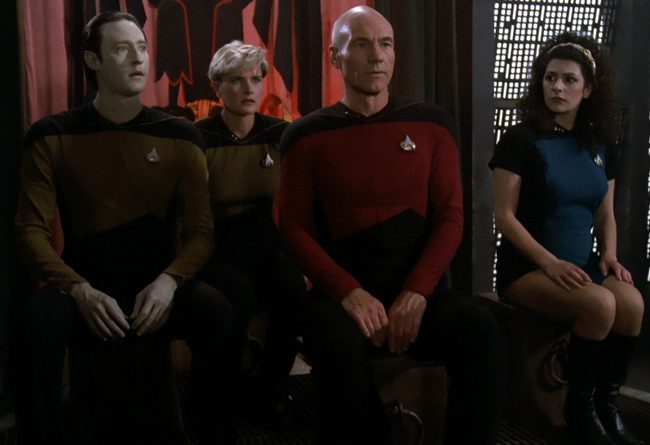 I have a confession. In stressful times, I tend to hide in my fandoms. A few days after the election, I binge-watched all the Indiana Jones movies in a single day. After the Women’s March, I turned to playing Tomb Raider. Fear and anger can be effective fuel, but they’re not easy (or healthy) to sustain for months or years. What’s a fangirl to do?

I turned to Star Trek: The Next Generation on Netflix. Initially I thought it might just be for the comforting rush of nostalgia. The soothing thrum of the warp core, watching a diverse crew trust each other and work together, it all takes me back to childhood.

As my rewatch began to unfold, I noticed an unexpected side effect, a healing, calming feeling. For every lighthearted episode – “Data’s Day”, anything with Q – I’m finding even more that don’t shy away from serious cultural commentaries. Star Trek has always imagined a better future, but it’s never asked us to buy into one where problems don’t exist. Instead, it shows the problems and how diplomacy, compassion and intelligence can solve them.

Like its television forerunners, Star Trek: TOS and The Twilight Zone, Next Gen’s episodes serve as a reminder that we are not the first people in history to face unrest and authoritarianism. Intellectually, I know I should be able to feel that without the assistance of television. But emotionally, for some of us, maybe it takes the comfort of fandom to shake something loose.

If you’re like me, when you’re tempted to hide or indulge self-pity, consider rewatching one of these episodes…

The pilot episode of Next Gen chose a theme that showed how far the new series would be willing to go thematically. It asked the question, does anyone have the right to enslave or take advantage of another being in order to make his or her quality of life more comfortable?

Next Gen never shied away from discussing racial and gender inequity and even spoke openly about animal rights. (The line, “We no longer enslave animals for food purposes.” was uttered by Riker in episode six.) It’s often thought of as “cheesy”, “too heavy-handed” or “preachy” to have plots centered on moral issues. But Star Trek, in every incarnation, has never been afraid to do just that. 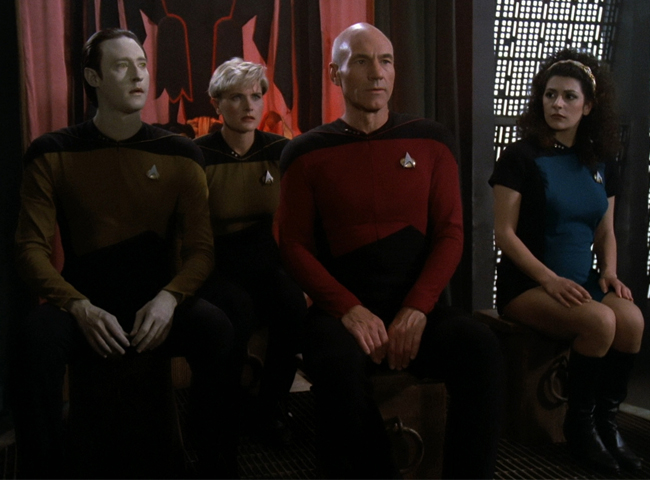 “The Measure of a Man” – Human Rights

Ironically, many of Next Gen’s best episodes regarding human rights have to do with the android Data. In this episode, Star Fleet threatens to take Data away and disassemble him for research and recreation. The question then becomes, “Who gets to determine what defines sentient life and who gets to exert power over another living being?” 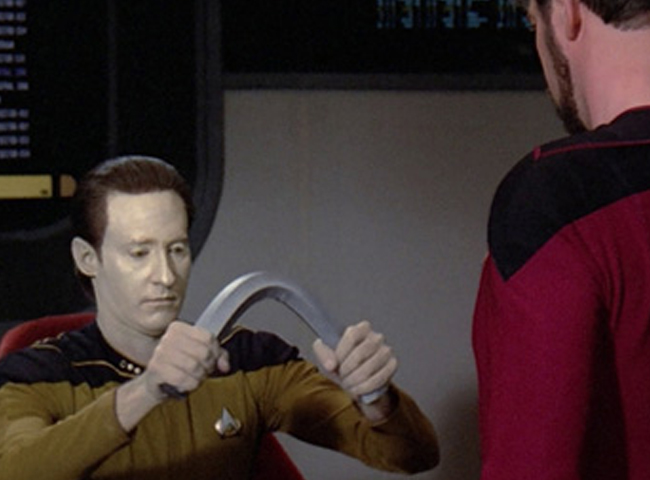 “The Drumhead” – Security vs. Freedom

Human beings have a long and time-honored tradition of promptly forgetting injustice. Early in America’s history, we had the Salem Witch Trials. Much later, the more McCarthy era witch hunts cost many in Hollywood their careers. “The Drumhead” takes a nuanced look at what happens when security begins to threaten liberty.

When the trial of a suspected traitor among the crew begins to center around his Romulan heritage instead of evidence, good people start to do bad things for the sake of safety. Even Worf, head of security, becomes emotionally involved to the point of paranoia. Writing a good character becoming embroiled in this was a reminder of just how nuanced these moments in time can be. It would be easier to portray good guys and bad guys. Star Trek chose to write about the influence of fear and how it affects a wide range of people.

How does Captain Picard fight? With reason. Again and again and again he expresses his concerns in private meetings and public hearings. When Star Fleet went low, Picard went high. 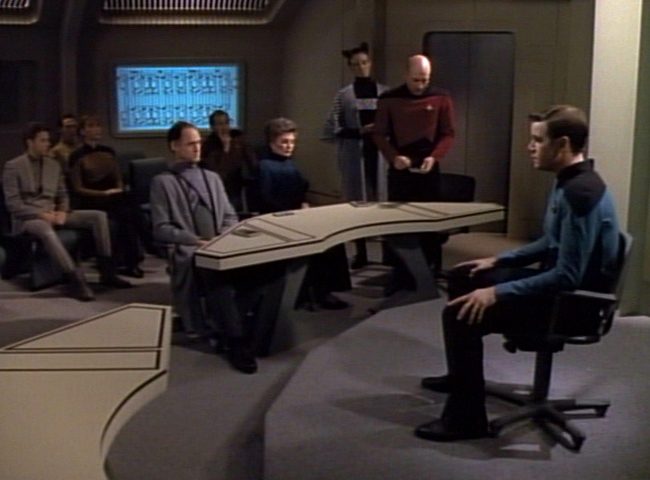 What do you do when your show features an incredibly well rounded, mature crew?

You introduce a secondary character that might better represent the struggles of the future.

Enter Barclay, who suffers from technology addiction. He often finds reality too difficult to face. Foreshadowing the realities of Internet addiction years in advance, this episode offers some sound psychological advice about emotional health and staying rooted in reality. As somebody who has the tendency to hide in my fandoms, this episode in particular resonates.

Also worth noting is an episode “The Game”, which portrays an addictive holographic game introduced by an enemy to make the Enterprise vulnerable via the distraction of its crew. 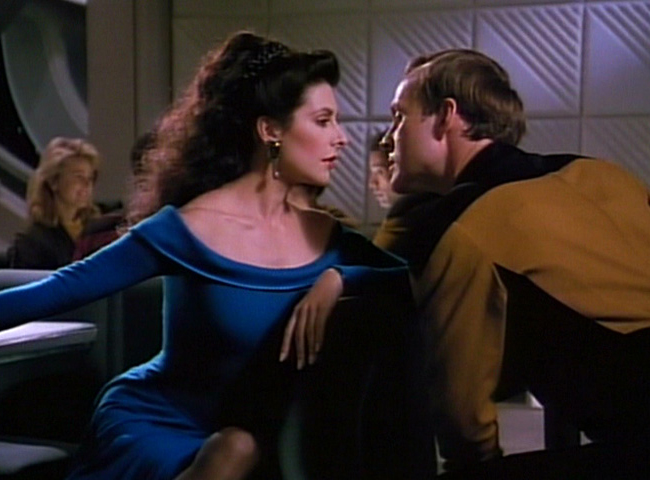 This episode is perhaps the most discussed example of the lofty material Star Trek was able to shoulder. When Cardassian forces capture Captain Picard, he is subjected to mental and physical torture.

According to IMDB, Patrick Stewart even reviewed tapes provided by Amnesty International to prepare for his role as a tortured hostage. This episode, along with the others on this list and many not mentioned, all referred back to historical events and foreshadowed various scandals and occurrences. 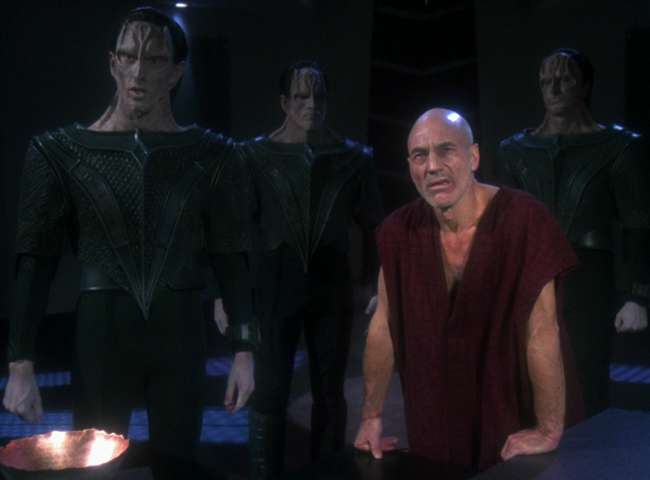 Though my rewatch began as escapism with a side of comfort, the inspiration I feel has morphed into a call to action, a function all science fiction has the potential to serve. By taking recognizable threats and societal ills, then setting them among the stars, sci-fi removes the sometimes-confusing and emotionally overwhelming context and complications of our present reality. In space, it is easy to see that a moral compass can, and should, always point north.

Carrying our fandom over into political and community involvement is a natural progression for a Trekkie. It’s my hope that our love of Next Gen can inspire us all to boldly go forward. 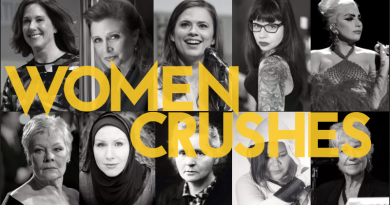 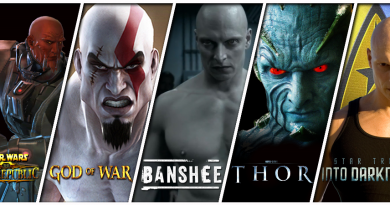 Kay Stops by Starmageddon for SDCC