Is it just me, or is there not enough pink in Star Wars?

What colors do you think of when you think of the galaxy far, far away? Blue, green, white, black, yellow, red. These are all basic vibrant colors that say something specific about George Lucas’ fictional universe – Kenobi’s lightsaber, Luke’s lightsaber, Leia’s uniform, Vader’s suit, Palpatine’s eyes, a Sith blade. Because the movies are a visual medium, color helps set the tone for a character without one word of dialogue being spoken or action being taken.

The obvious answer to this blog post’s title, I suppose, is that pink is too close to red.

Understanding how George Lucas is driven by visual imagery and wrapping themes into neat packages, I see why that makes sense in the clearer morality of the Original Trilogy. But over the years Star Wars has moved past the simple black, white, and red all over perspective of the late 1970s.  In creating The Phantom Menace, Lucas forever altered the pure, unadulterated evil personified by Darth Vader and forced us to consider his black visage as something more nuanced, and tinted with shades of grey.

While Mace Windu is generally cited as the first move beyond blue or green when he wielded a purple blade in the Prequel Trilogy, a broader spectrum of Jedi lightsaber colors had already been established in the Expanded Universe. In fact Jaina Solo, one of the fashion-forward Jedi, was using a purple lightsaber in the books well before Sam Jackson requested his favorite color for his character’s.  Jaina, like Mace, fits the color, which, from a certain point of view, makes a blend of Sith red and Jedi blue.  As characters and fighters, they both dance on the blade’s edge between passionate abandon and rigid Jedi principles.  Their purple lightsabers are emblematic of the moral struggle both characters have faced as Jedi. In the end, though, like the cooler tone purple is, we know those two characters are firmly entrenched in the light. 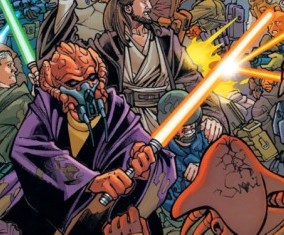 Other colors have peppered the EU lightsaber color palette, too – silver for Corran Horn and the Imperial Knights, yellow for Jaden Korr, orange for Plo Koon – and each one says something different about the character wielding it.  For that reason, I’ve always thought pink would send an interesting message about the character. Pink is derived from two colors – red and white. Red is the color of passion, war, love, danger, determination, and violence. White is the color of purity, clarity, and innocence. What if the more positive traits of red, like passion, love, and determination, assert themselves in the character, yet on some level we’ll always question whether the potential exists for something more dangerous and sinister to play out within the pink lightsaber wielder’s psyche? What would a pink blade say to the viewers?

On first blush – yeah I made a hue pun, so sue me – pink would symbolize something else besides all those things: femininity. In the Original Trilogy, Leia’s femininity was stifled somewhat by the virginal white. (Although if you enjoy color analysis, check out my blog discussing Leia’s brief stint in red during The Empire Strikes Back.) For much of the Prequel Trilogy, Padmé wears blue, which generally gives the impression of trustworthiness and calm, although some shades of blue can represent coolness or uncaring. Within the written medium, color becomes less prominent because we can’t see what the characters are wearing, and that, in my opinion, makes the lightsaber blade color even more critical to establishing character. 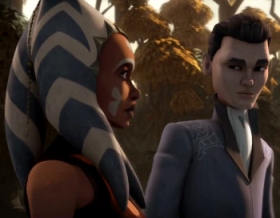 For some fans, Star Wars has always been a testosterone-washed world, but for many women it was a gateway to realizing that they too could be empowered. Between characters like Mara Jade in the EU and Ahsoka Tano in The Clone Wars, the barriers to showing genders equally in Star Wars have been knocked down. An upcoming episode of The Clone Wars will deal with Ahsoka and her blossoming relationship with Lux Bonteri, the son of a murdered Separatist leader.  Now that the animated series has created a character who is relatable to fans of the male and female persuasion, most importantly to the younger ones, I’m excited to see Ahsoka act her age and, probably, a little more like a teenage girl, as Ashley Eckstein noted in her blue carpet interview at the Season 4 premiere.  Dave Filoni has chosen to direct this episode and I’m excited to see how they portray the young Jedi, because while she’s on a path to Jedi Knight philosophy-wise, Ahsoka is undoubtedly naïve about interpersonal relationships outside the Jedi Order.

In the EU, Mara Jade Skywalker was a carefully crafted character who embodied femininity and power, but for the past several years no one has been able to conjure up the same magic in either the comics or the books to connect with the female audience. (The Legacy comics may be the one notable exception.) It’s that noticeable loss of femininity, that mixture of the characteristics associated with pink by way of its base colors red and white, that’s been missing. Strength, clarity, love, purity, passion, determination, and a little bit of danger…

The purely selfish reasons I want pink in my Star Wars…

It’s no secret that I believe gender equality in some parts of Star Wars needs a boost, a beacon of sorts that says, “Star Wars is for the ladies, too.” Obviously a little pink is going to send the right message to the fangirls, and maybe even drive some factoid-minded fans batty in the process.  That pink lightsaber – is she Sith or a grey Force user?  [Yodavoice] Begun, the pink lightsaber debate has. [/Yodavoice] And perhaps it’ll send the message to people like Harry Potter star Daniel Radcliffe who sees “Star Wars as being a predominantly male thing.”

The girly hue did receive a nod from author Timothy Zahn when he gave the lead character Stacy from the well-known fan film Pink Five a named appearance in the book Allegiance. 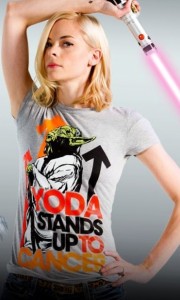 But here’s the real reason I’d like to see a pink lightsaber brandished, and I think it lines up perfectly with a cause Lucasfilm has long supported – the fight against cancer.  Last month, in conjunction with its Blu-ray launch of The Complete Saga, Lucasfilm partnered with celebrities, eBay, Major League Baseball, and others to encourage fans to “Use the Force for Good” by supporting the Stand Up To Cancer (SU2C) initiative, which funds groundbreaking cancer research.

Actress Jaime King posed for the StarWars.com publicity shot, and while some have called her lightsaber purple, I very much think it looks pink. (Which is what inspired me to thinking about this blog.) While the eBay auction is over, you can still get your Star Wars themed SU2C shirts through the end of the year. I got mine in the mail today – partially because it had Star Wars, but truthfully because cancer has affected so many important people in my life so what better way to stand up to the disease than with your fandom?

A few years ago, only weeks after her father was laid to rest, my mother was diagnosed with breast cancer. At the time I thought our family’s world had been knocked off its axis because of the double-whammy, but now I know that breast cancer can do that all on its own.

From WebMD:
Breast cancer is the most common cancer among American women, after skin cancer. Today, approximately 1 in almost every 8 women (13.4%) will develop breast cancer in her lifetime. Breast cancer is the second-leading cause of cancer death in women after lung cancer — and is the leading cause of cancer death among women ages 35 to 54. The American Cancer Society estimates that in 2009, approximately 192,370 women will be diagnosed with invasive breast cancer and approximately 40,610 will die. Although these numbers may sound frightening, research reveals that the mortality rate could decrease by 30% if all women age 50 and older who need a mammogram had one.

October is National Breast Cancer Awareness Month. Now in its 25th year of providing education, awareness, and empowerment, the pink ribbon movement has inspired millions to rally to the cause of fighting this deadly disease that rips families apart. I am blessed that my mother underwent surgery, chemo, and radiation treatments that have proven successful, but at the same time I know the fight isn’t over, for her or others afflicted by the disease.  Just recently, one of my classmates from college was diagnosed with breast cancer; she is in her early 40’s.

When Star Wars first hit the big screen in 1977, pink was most certainly a color that implied more tender sensibilities, and the breast cancer awareness initiative wasn’t even born yet. Now, pink has transformed into a color that denotes strength, determination, and passionate resistance of something that would take our loved ones.  Isn’t that, at its core, what Star Wars is all about?

This post is dedicated to my mother. Love you. 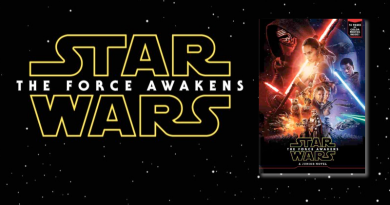 14 thoughts on “Why Aren’t There Any Pink Lightsabers?”