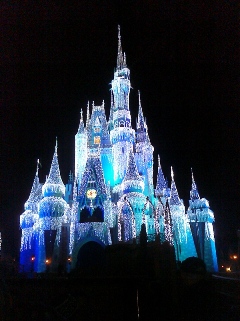 In my Reenergizing the EU Novels blog last month, I proposed that Lucas Books and Del Rey should consider a “big event” storyline that might reinvigorate the fandom, create publicity on a national major media scale, and relaunch Star Wars books into the limelight. Star Wars Fan teased that she might have an idea of what event I spoke of…

Jaina and Jag’s wedding and the founding of the Imperial Knights, I presume?

…and many others, knowing what characters and types of stories I’m passionate about, undoubtedly came to the same conclusion.

Guess what – it’s not the wedding of Jaina and Jag.  When I do reveal the “big event” idea next month, people who really know my writing, how I work when my evil author mode is firing, won’t be too shocked – and that’s all I’m saying on that subject matter for now. 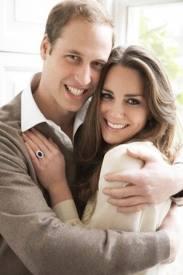 Today, on the eve of the marriage of His Royal Highness Prince William of Wales to Catherine Middleton, I want to talk about royal weddings, real and otherwise. And yes, Jaina’s and Jag’s.

When the upcoming real-life royal nuptials were announced, there was grumbling over costs.  Who was going to pay for this event? The crowd control and the security, and all the other collateral expenses?  How would Britons ever manage in these difficult economic times?  The reality, though, is that no one is losing pounds – except maybe the bride and her mum – because of the royal wedding.  There are TV advertising sales, memorabilia merchandising, commemorative books; you name it, they’ve sold it.  And that doesn’t even begin to cover the subliminal message being broadcast during every second of the coverage, which began weeks ago on some entertainment and news programs. Here’s England and all its cool landmarks. London, Buckingham Palace, Westminster Abbey. Aren’t they splendid and grand? (We won’t mention that they offed a king’s or queen’s head or two back in the day…)

Not to put too fine a point on it, but Buckingham Palace is simply borrowing a best business practice from Disney: princesses need charming princes, and everybody is a sucker for a fairy tale.  Anyone who thinks Disney is the land of Mickey Mouse should stand anywhere within the Magic Kingdom and consider where all roads lead – to a princess’ castle.  It’s against that backdrop that night after night Disney recreates the enchanting warm fuzzy feeling that causes people to travel from afar and drop cash like it could be conjured by fairy dust.  With just a month now until the Star Tours re-opening, it’s easy to see how Star Wars and Disney together are simply magic. (Sometimes, I imagine the Maker himself must be in fits over the fact that Harry Potter and Universal beat the Star Wars-Disney duo on the dedicated theme park front.  I mean, who wouldn’t go to the Galaxy Far, Far Away?)

The royal wedding tomorrow is just a real-life Disney princess movie on steroids. Have princess, will travel.  While many Britons are indifferent on the state of the monarchy, they understand that tourists visit their country in droves to see royal landmarks; especially castles, lots of castles.  And tourists help pay the national bills. (It’s no coincidence that Florida, home to Disney World and the millions in sales tax and hotel tax it produces, is one of the few U.S. states that can get away without having a personal income tax.) The return on investment may not be immediate – although I’m thinking Wills’ and Kate’s wedding suite might just be bathed in gold.  It will be realized in the long term in tourism and merchandising.

It’s a positive turn for a country that has been hard hit economically these past few years. When Princess Elizabeth married Philip Mountbatten two years after the end of World War II, Winston Churchill called the wedding a “flash of color on the hard road we have to travel,” and I think that’s exactly what this wedding will be, not just for Britons but also for the people all around the world who will be watching.

Hope and the potential of young love are powerful tools to engage people, and that’s exactly why millions are fascinated with the impending royal wedding. Of course market saturation helps, but you have to have an interesting product to even attempt that type of blitz.  It’s the general feeling of goodwill that will carry the day and cause people to tune in and pay attention. We want to laugh, cry, and enjoy the moment – even the bittersweet part when Princess Diana, a queen of hearts, is missed by her first-born son.

How does this all relate to Star Wars, you ask.

In the course of the recent Star Wars Expanded Universe, the creative parties have literally found more ways to round out of a potential royal wedding between Jaina Solo, daughter of Princess Leia, and Jagged Fel, son of Baron Soontir Fel, than a cat who doesn’t want a bath.  And just like that cat turning itself inside out, the EU has managed to damage itself and a lot of other things in the process.

Most importantly – and this is another lesson from Disney – you have to resolve one relationship to make way for the next princess in the making. Imagine Cinderella still waiting for her fella twenty books later – and then imagine a lot more orange groves just outside Orlando right now (and Floridians paying a lot more in taxes). As the creator of ABC’s hit show Castle recently remarked, when asked about a competing serial will-they/won’t-they show on Fox, he had this to say –

“Bones is heading into its seventh year and there comes a point where you put up or shut up. … You can’t extend that tension that long without your fans breaking.”

Ironically, weddings don’t change much about the partners’ relationship these days anyway. In an age of dual-career couples and extended courtships, very little actually changes between two people when they officially tie the knot. William and Kate have lived together for years; they’ve fought and they’ve worked side by side. What their vows signify is the sealing of a bond, a promise. Despite today’s more marriage-cynical society, their wedding offers one brief pit stop where everyone experiences magic, hope, and love. Because we all need that once in a while.

Considering where the Star Wars EU has been – high on dismay, loss, and darkness; low on unity, romance and friendships – I think a royal wedding has been sorely missed. Just a simple gesture of goodwill, merriment, and pure unadulterated fun with the fans. Sure, it’s not what everyone wants – but there’s been plenty of fan service in the form of Essential guides, piles of Sith books, Boba, Vader, Clones…*sighs in my best southern girl Scarlett O’Hara imitation* Be still my heart. So much guy stuff. 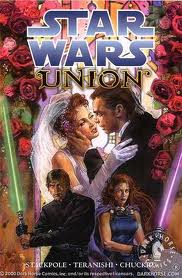 The last big wedding story we had in Star Wars was the Luke/Mara comic Union, which came out in 2000. (Sorry, Mirta’s doesn’t count, even if Jaina did do a cool trick at it.) A similar style of royal wedding over a decade later – real-world time not in-universe time, which is almost twice that – isn’t asking too much for the fans who’ve hung onto a slim thread of hope for the last living child of Han and Leia Solo.  In fact, I bet more than a few would come back for it.

I have no problem asserting that more than anyone else, Han and Leia deserve a happy wedding moment, followed by more grandkids shared with their daughter and all the mayhem imaginable when faced with little Jedi Solo-Fels. (The Grandpa Wars, anyone? Which side are you choosing, Soontir or Han, Imperial or Rebel? Or will Jaina-Jag Junior conquer them both?)

What’s that saying? A picture is worth a thousand words. Since the EU abandoned the epic character-filled covers of the NJO, we’ve seen little true artwork for the Expanded Universe characters. Photoshopped covers have focused on Luke, Han, Leia (all botoxed and eternally youthful), Ben, and a bunch of Sith. As an adult, Jaina had one cover – the death blow on her twin – and a small headshot in the Essential Guide to the Force. A tradepaperback comic story about the wedding of Jaina and Jag is the perfect opportunity to showcase artwork of Jaina (finally), Jag, and their respective badass clans.  Bring in some Wraiths and Rogues, spice it up with Imperial intrigue, and for once just make a story and visuals truly about beauty and romance.  Hey, they can even put the pictures in the Even Newer Essential Guide to Characters.

It’s exactly the flash of color we fans need on this hard road we had to travel.

So no, this isn’t the “big event” I have in mind, but I do think this is an event the Star Wars EU should seriously consider.  If I were dream-teaming it, I’d put Allston on the script and Duursema on the artwork.  I can already imagine how exquisite and laugh-out-loud funny it would be.

I’ll be watching the real-life royal wedding tomorrow, hoping someone at Lucas Books or Del Rey is watching too and smiling at the happiness surrounding the bride and groom. And suddenly inspiration strikes!

Yep, a girl can dream… 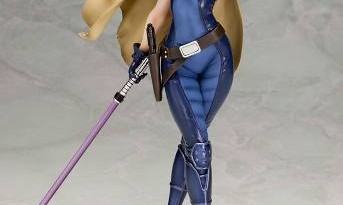 Choose Your Side: Imperial or Rebel 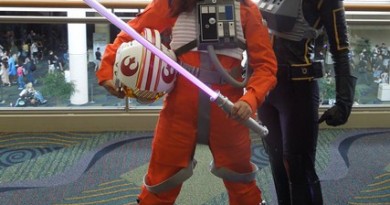 3 thoughts on “Royal Weddings Are Good For Business”