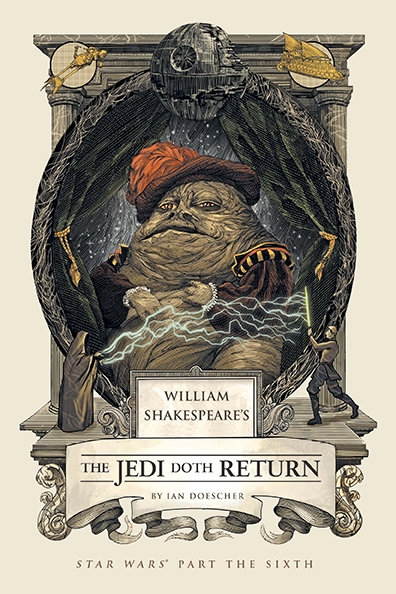 William Shakespeare’s The Jedi Doth Return is Ian Doescher’s third book to cross Shakespeare with Star Wars. And, as you may have heard, I love Shakespeare and I love Star Wars. But in this third go-around, I began to wonder if the novelty had worn off.

There seemed to be a lot of characters narrating what was happening in this one and I found myself missing the deeper characters insights the previous installments had provided. Not that The Jedi Doth Return was without those insights; they just seemed far fewer and far between. Instead it was a lot of place setting and action-relaying. Surely these devices are used in Shakespeare – Falstaff was known to narrate what he was doing as he did it – but here it started to feel heavy-handed. At one point Luke actually telegraphs what he’ll do in a later scene.

This story would also probably be the most difficult to stage of the three –with the pit in Jabba’s palace, the sarlacc, the complex space battles, force lightning, and that shaft in the Death Star. I had a harder time imagining how it’d all work as compared to the hilarity of the directions for the Battle of Hoth in The Empire Striketh Back.

Doescher has a lot of challenges he handles skillfully though. In addition to the regular achievement of expanding, while keeping recognizable, Star Wars film dialogue into Shakespearean language, there’s Huttese, and Ewokese, and a singing rancor. After trying to figure out the formula for the Ewokese (at one point it seemed Gungan with less s’s), I discovered in his author’s note that the blocks are film dialogue, quasi-English, and then just something to complete the rhyme. And it works. You understand what the Ewoks are saying while they still retain their Ewokness.

There’s also plenty of material for another round of Spot the Shakespeare Reference – from Hamlet and Henry V to The Tempest and A Midsummer Night’s Dream. These add another layer to the work and offer the chance for more joy if you’ve studied up and recall the context of the original line. For example, Luke says “Oh brave new world, that has such creatures in’t!” as a nod to Miranda in The Tempest’s “–Oh brave new world, that has such people in’t!” Luke is saying this as a reaction to discovering the Ewoks while Miranda says it when she’s seeing a group of other human beings for the first time. Well played, Mr. Doescher.

The best tribute of all might be the one to the famous “All the world’s a stage…” speech from As You Like It. In Act III, C3PO uses his version of it to tell the Ewoks the rebellion’s story so far. In addition to it fitting so well, it’s a nice meta moment too. And speaking of meta, be sure to keep your eyes peeled for a joke about midichlorians.

For me though, it was the last two acts of the play that revitalized my joy in this crossover genre. There lie some of the most beautiful pieces of language and touching exchanges. A dastardly soliloquy from the Emperor makes an appearance. Han finally makes his relationship with Leia seem less one-sided before doing something we’ll probably never see in the movies – singing and dancing. Luke and his father have a deeper conversation than what the original film was able to portray. And we get one more round of the two guards who question in-universe Imperial logic before we come to an ending that reminded me much of Puck’s closure of A Midsummer Night’s Dream. This may not have been my favorite Shakepearean Star Wars story, but it still was a valiant go.

Kay grew up wanting to be an astronaut. After seeing Star Wars, she wanted to be Princess Leia, Han Solo, and an astronaut. Life’s taken her on a bit of a different path for now, but she’s still a Star Wars fangirl at heart who enjoys surprising people with how geeky she really is. A photographer and voice actor who also consults on communications and marketing, Kay spends any free time reading, learning, getting outside and, of course, making pew pew noises. You can follow her on Twitter.