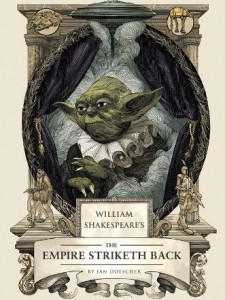 Ian Doescher’s William Shakespeare’s The Empire Striketh Back is fun to read, especially out loud. I bet it’d even be more fun to perform the whole thing on stage. If nothing else the AT-AT battle would be incredibly entertaining; it already is just from the stage directions. Doescher has clearly paid great attention to detail to capture the spirit of both Star Wars and the language of Shakespeare while making several tributes to The Bard’s works and throwing in some jokes along the way.

As a Shakespeare enthusiast, I got excited over references to A Midsummer Night’s Dream, Henry V, Much Ado About Nothing, and of course, the [Exit, pursued by a wampa] tribute to The Winter’s Tale. I actually started marking them in my copy. It’s a game… a very nerdy game. And while it adds another level of engagement, it’s not necessary for you to recognize them to be entertained by the tale.

One element I really enjoyed of the first Shakespeare’s Star Wars book makes appearances here as well – the insights into the characters achieved through expanding their lines. Star Wars movies tend not to be very verbose, but here we get a chance to read more of what characters think of each other and the situations they find themselves in. Mostly this is accomplished through asides, which let a character ruminate out loud without the other characters in the scene being able to hear it. The Empire Striketh Back was maybe a bit heavy on these as the introspections get to a point of repetitiveness, or maybe it was just the anaphoras getting to me. It’s still fun to get into a character’s head though. Leia and Han would give Beatrice and Benedick of Much Ado a run for their ducats.

I missed having more of the Chorus, but Doescher explains in an endnote that people actually complained he used it too much in the first book. Different strokes, I guess. Despite some of my preferences, I was hooked from the first line. How could you resist a story that starts with “If flurries be the food of quests, snow on.”?

If you like Shakespeare and Star Wars, you should read this book. If you’re familiar with one or the other, I encourage you to try the book out. If you don’t know much about either, well, this will be a very strange introduction for you, but knock yourself out.