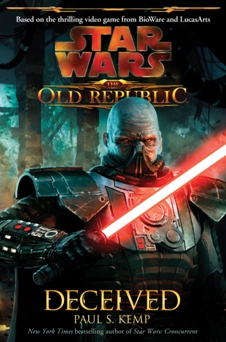 Deceived is the second book leading up to the EA/Bioware release of the Star Wars: The Old Republic MMO. I’m not a gamer, and I have to say I didn’t like the cover. But I bought the book (Kindle version) anyway, and I’m glad I did.

The story is character-driven, and packs in a lot of good action, too. The three main characters – a Sith Lord, a Jedi Knight, and a former commando – are asked the same questions: What would you be willing to do for love? What principles are you willing to sacrifice?

Darth Malgus is a proud, honorable Sith Lord. A true believer in the Dark Side, he destroys the Jedi Temple on Coruscant as he had seen in a vision. Malgus is driven by his faith and torn by his love for his Twi’lek slave, Eleena.  He is a chilling character, but not completely unsympathetic.  One of my favorite scenes was when he joins a meeting with two other Sith Lords.  Kemp is a corporate lawyer, and I found myself chuckling at how believably he brought office politics into the world of the Sith.  But Malgus is scary.  The Beast stays the Beast. Love doesn’t redeem him.

Aryn Leener is an empath and a Jedi Knight out to avenge her Master, who was slain by Malgus. Aryn is driven by her anger at the Sith, her loss of faith in diplomacy, and her need for revenge. As a woman, Aryn was a character I liked. Her story arc was developed and her actions consistent with her characterization.  She wonders if the Sith truly have a choice in becoming dark side Force users, something I’ve wondered myself. My only problem – and this is true for all the Old Republic books I’ve read so far – is that I’d like a woman Jedi Knight who seriously can kick a Dark Lord’s ass in a lightsaber duel!

Zeerid Korr is a former commando forced to become a smuggler to support his daughter, who lost both her legs in an accident. Korr is driven by his love for his daughter, his feelings for Aryn, and his guilt over his current shady profession. Korr’s scenes with his daughter – protective, proud, worried – strike a realistic chord.  The lengths he was willing to go to protect his daughter resonated with me as a parent.

The Jedi and Sith take parallel paths. Both start off as true believers, then become disenchanted with their Orders. The Sith chooses to renounce love to remain a Sith Lord, and he pays dearly for his choice.  The Jedi renounces her Order to remain true to herself, first by disobeying orders to head off alone to avenge her Master – which she ultimately chooses not to do, keeping true to her nature as one of the good guys – and then by choosing to stay with Korr.  She and Korr pay a high price, as well, but with a happier ending.

The pacing is smooth and well written. The sacking of the Jedi Temple was vivid; watching the trailer for The Old Republic after I read the book, the action was almost exactly as I had seen it in my imagination. There was even romance: a doomed and somewhat over-foreshadowed one between Malgus and Eleena, and not quite enough between Korr and Aryn, but I’ll take my happy ending.

I liked Deceived enough to take a look at Kemp’s other Star Wars books. This book rates as a good brownie hot fudge sundae, only next time more chocolate sauce – the development of the relationship between Aryn and Korr – please!