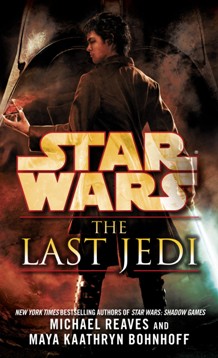 The Last Jedi features Jax Pavan, a Jedi who survived Order 66. Jax believes himself to be the last Jedi left alive. Allied with his friends – the Sullustan Den Dhur, the droid I-5, and a Gray Paladin, Laranth Tarak – Jax is charged with escorting the Cerean Whiplash guerrilla resistance leader, Thi Xon Yimmon, off Coruscant to safety.

The story starts out with a good pace and continues fairly evenly, finishing in a climactic duel with Darth Vader. In between are a host of characters including smugglers, the Whiplash team on Coruscant, Antarian Rangers, time-bending Cephalons, a Sith holocron, Dathomiri witches, Prince Xizor and Black Sun.

All of which sound interesting, but the story is plot driven and the characters suffer. There were a great many of them, and instead of a few developed in depth, there were many who were flat, shallow, and failed to engage me. The death of Jax’s lover, Laranth, did nothing but send Jax into a spiral of what appears to be self-pity rather than real mourning. Meanwhile, almost every other female that Jax runs into finds herself attracted to him. There’s also a series of strange flirtations between two Whiplash leaders – she’s a poet and he doesn’t care for her poetry – as well as a pair of smugglers who “seal the deal” (the actual phrase used in the book) in the Captain’s cabin, and manipulative flirting by one of the Antarian Rangers.

By the end of the book, I was struggling to finish it. While I enjoyed the action, I may not have held on to the end if I weren’t writing this review. I was certainly not inspired to go back to read the Coruscant Nights books. This is probably a book for Jax Pavan completists.