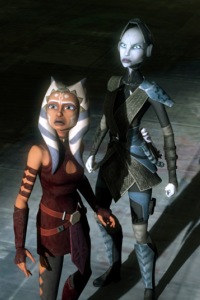 “To Catch A Jedi” has three central female characters. Ahsoka is in a dingy underworld, but her gender is never brought up. She fights alongside Asajj Ventress, who still seems to be on the gray side of the Force. The Jedi Order, as represented by its men, does clean up afterward, but Ahsoka’s secret contact is Barriss Offee. And the whole situation was started by another woman, Letta Turmond. This episode makes up for the droids arc, where gender-neutral characters still managed to classify female as “other.”

Ahsoka looks frightened and angry as she walks along the street and reaches out to her best friend Barriss. It makes Ahsoka seem so much more real that she has someone like this from her early days of the Temple. (Although I wasn’t reviewing episodes back when Barriss was introduced, I think I should have praised her more anyway.) She’s quieter and gentler than Ahsoka, a more reserved Jedi, but they obviously get along, perhaps because of their shared experiences and shared loyalty to the Jedi. That loyalty is gets tested for Barriss now. She states the obvious – that Ahsoka shouldn’t be using her personal, Jedi-provided comlink to try to secretly call the Jedi Temple – and resolves to work from the inside.

I like that Ahsoka found herself a cloak, and it’s a bit funny that she picked one with space for her montrals. The fight on the subway is fun to watch, as she flips around and gracefully interacts with her environment. She moves in some of the more animalistic (or perhaps Spider-Man) ways we saw last episode, We also get to see a variety of alien species, such as an Anacondan sitting in the luggage rack. Ahsoka looks much more realistic without so much attention paid to the skin windows on her tunic. And in some scenes it’s clear that she’s thinking like Anakin. 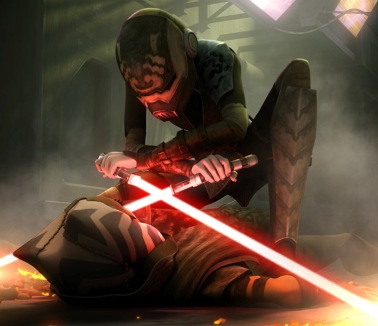 Asajj Ventress also gets an awesome undercover outfit upgrade. I’m not sure why she happened to become a bounty hunter in the shadow of the Jedi Temple; her last appearance made me think she would go into a more cerebral occupation, but she does have to make money somehow. Her dialogue with Ahsoka covers a lot of ground, and it makes perfect sense that Ahsoka would think Ventress was the one who set her up.

They have a lot in common now, each betrayed by their own side, and Ahsoka recognizes that. When Ahsoka asks “What are you now?”, Ventress doesn’t hesitate to answer that she’s a bounty hunter instead of giving a more metaphorical interpretation to the question. Ventress is still prickly and vicious, and they balance out each other well with such different attitudes. Even Ahsoka’s youthful surprise against Asajj’s more experienced acceptance of their teamwork shows how they work together. Their fight against the clones was a frenzy, with a particularly tense moment when Asajj was picked up by a clone and seemed to flail around without direction. Ahsoka continues to make her own situation worse by being seen with a war criminal. They even have some banter that reminded me of Ventress and Obi-Wan. Toward the end of the episode, Ventress being hit in the face with a pipe is also surprisingly violent, especially since I’ve always liked her.

The first few minutes of “To Catch A Jedi” feel more like the prequels than any episode before, directly pointing toward Revenge of the Sith in a way that seems to justify The Clone Wars’ setting. It had to be The Clone Wars because it had to show this moment. Ahsoka had to exist because she had to contribute to this moment. Never has The Clone Wars felt like such a part of the Star Wars universe, or had so much gravitas. The episode doesn’t blatantly pull at the viewers’ heartstrings – it gets them involved enough that they only later realize how tangled up in Anakin’s and Ahsoka’s story they are. 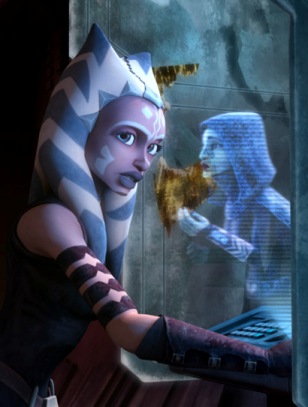 The Jedi Council meets on a dramatically stormy evening. It’s not immediately clear whether Tarkin believes that Ahsoka is guilty, is in on the setup himself, or isn’t in on it but sees it as useful for the anti-Jedi, pro-human government he will later help create. I love the inclusion of Plo Koon referencing his close ties to Ahsoka, and the scene takes its time explaining everything.

Anakin’s insistence that “she’s running to prove her innocence” doesn’t exactly sound like it would stand up in court, but Anakin is a wild card and he does know that she’s “running because of a lie.” Anakin’s possessiveness from “Point of No Return” is back. Also in fine Revenge of the Sith tradition, Obi-Wan is trying to be the peacekeeper between his former Padawan and the Council. I wish we had had more scenes like this, but this is an especially dramatic and appropriate place for one.

Mace Windu saying that including Anakin on the mission would outright makes things “worse” immediately helps me understand Anakin’s anger toward the Council in Revenge of the Sith, as well as the sort of thing he must be thinking of as he decides whether to save Mace or Palpatine in the moment where he becomes Darth Vader. When Yoda asked if Anakin could stay focused, I almost expected him to say “I find your lack of faith disturbing.”

“To Catch a Jedi” flowed well, with consistent tension and not too many side plots. It succeeded as a story that was fast-paced but not narrow, with some great action scenes and some development for Anakin and Obi-Wan, too. 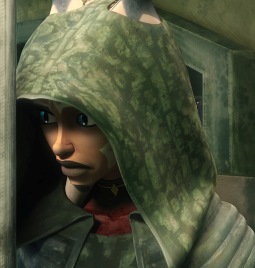 As a side note, some of “To Catch a Jedi” takes place on or around level 1313, the location of the upcoming video game, but it’s far too early to tell what that means. It’s obvious a lot of work went into the music. It’s very reminiscent of John Williams during the Council scene, and then exciting and a little frightening during the powerful introduction of level 1313.

The humor in this episode, mostly physical comedy based on Ahsoka’s interactions with pedestrians and animals, was unobtrusive and cute. I liked the beady-eyed little animal that also becomes a notable part of the plot.

“To Catch a Jedi” ends on a very effective cliffhanger. It’s got me wondering for next week. Who’s the mysterious assailant? Barriss seems a likely choice, since she directed Ahsoka to that spot, but why? The assailant even moved like Ventress, and seemed to have more of a command of the Force than Barriss has ever displayed. And of course I’m wondering what will happen to Ahsoka next week, and how the Republic putting a Jedi on trial will push it closer to becoming the Empire.