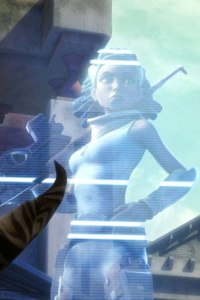 “The Soft War” is more of the same for the Onderon arc, although the female characters and royals both have expanded and improved roles. The Ahsoka-Lux-Steela love triangle continues without moving forward, while other relationships such as Saw’s and Lux’s rivalry, or Ahsoka and the older Jedi, are set to the side in order to get the plot moving. Once it does it has some fine dramatic moments, especially a public execution threatening both former King Dendup and the rebels.

Steela works well as the leader of the rebellion, with her holographic form projected larger-than-life around the city. I thought toward the end of the episode that Saw’s rashness and Lux’s weapons-toting would save the day for good, but in the end it’s Ahsoka who really brings the rebellion to victory, giving this episode a hefty dose of positive female leadership.

I also liked the presence of an incidental female scout named Dono. She moved organically and unobtrusively within the plot. This was refreshing after characters like Asajj’s Nightsister friend Karis at the end of Season Four, or Ahsoka’s ally Kalifa at the end of Season Three, who die shortly after scenes obviously meant to shoehorn in some wartime bonding to make an emotional moment work. Dono had had me curious to find out what her story was, but if I never did I could imagine her as someone like myself.

Speaking of obvious things, Saw walks into a trap I saw coming from the get-go – why would the conquering king let the defeated one walk around alone? – and leads up to the nicely done execution scene. Both King Dendup and his General Tandin, who went over to Rash’s side after the invasion, reveal their thoughts about Onderon to Saw in ways that both explain and complicate their actions.  Saw’s captivity also continues the heavily political feeling in this arc, with more dialogue separating what it means to be a terrorist from what it means to be a patriot.

The execution scene was notable in both how quickly the plot moved, with the two sides of the war flip-flopping in terms of who had the upper hand, and in some of the dialogue and voice acting.  Steela’s “Come with me” is perhaps the most sincere line in the whole arc, and “Your people will see you into the next world. May you find forgiveness there.” is the first moment where Rash is genuinely scary. I was starting to wonder whether Dendup’s head would actually roll across the stairs.

This episode wasn’t without its cringeworthy moments, though. Of course Rash had to pull a fruit from nowhere and do the “bad guy eating to show how little he cares” trick. And it sounded like Saw had been saving his comeback to Lux – “Why don’t you go write a speech about it?” – since sixth grade.

A marked contrast between Rash’s posturing and the General’s change of heart comes when Rash calls Tandin “traitor,” a word he seems to like, while General turns it around with,  “I was, but not any more.” Tandin’s line gives the viewer the sense that he’s been thinking this over for some time, just like Dendup had been thinking over his choices. 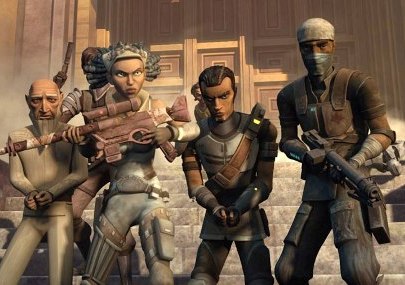 The episode ends with a lesson about togetherness that comes too late and isn’t relevant enough to the first twenty-one minutes: Saw, Ahsoka, and Tandin all acted alone, with only Lux and Steela obviously teaming up.

Another slight disappointment was the underwhelming droid general Kalani. After serving as the cliffhanger for last week’s episode, this week he only stood around. His beaked face and ornate gold trim are unique, but without him actually doing anything impressive I felt like I had missed a big reveal.

The arc has suffered from the beginning for not going into the Gerrera sibling’s backstory. Even with Steela getting a lot of face-time and some fantastic animation this week, her story is beginning to falter because we don’t know whether she had a personal reason for joining the rebellion – parents killed by Separatists would be acceptable, and explain why she might feel close to Lux – or just believes in the cause in a more idealist, theoretical way. I doubt that will be explained next week, but I’m one for two in terms of predicting things this week. (I was right about Saw walking into a trap, but didn’t foresee Ahsoka saving the day.)

The episode ends on a positive note: it seems like the will of the people has been pretty much won over by the rebels. But the preview clip for next week shows that the rebels are outgunned, and Ahsoka is going to have to make a tough choice that could bring all the relationship drama together and test the groups’ teamwork even more. It’s Onderon’s last chance to shine before the next arc begins, and so far Onderon hasn’t been very remarkable. Strong female characters can’t quite make up for a group with too many sidelong glances and not enough backstory or chemistry.