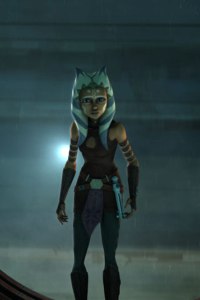 Ahsoka is “The Jedi Who Knew Too Much,” but it’s what she doesn’t know that hurts her in this week’s episode. The story is action-heavy, but it also puts emphasis on conversations between Ahsoka and other characters to create a lot of different ways to show a harrowing situation. It’s an illuminating episode for her, including what may be my favorite Ahsoka moment ever.

Ahsoka’s belief in herself is paramount to why she runs, instead of turning herself in to the clones. She refuses to remain calm when she didn’t commit the crime. The mysterious perpetrator – Sidious? – who framed her for murder probably would have arranged for Ahsoka to be found guilty, too, so maybe she is right in fleeing. But the earlier dialogue indicates that Ahsoka does have some shortcomings, which makes the whole episode seem more self-aware than usual.

The favorite moment I mentioned is when she goes from sounding doubtful around Anakin and copying his angry attitude toward Tarkin to reassuring Barriss and telling her to trust in the Jedi way instead of giving in to emotion.  When Barriss compliments Ahsoka’s belief, Ahsoka says, “I guess I fooled you like I have everyone else.” 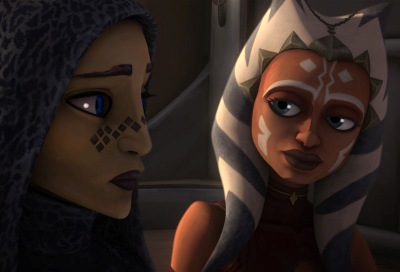 That line, and the way she realistically had different attitudes depending on to whom she was talking, hung over the entire rest of the episode. Even as Ahsoka ran from the clones and held her own against an entire platoon, she is also doing it all out of desperation. It shows that someone can be strong and worried at the same time.

The Anakin-Ahsoka relationship is of course central. She moved from fearing that Anakin had killed clones to help her, to realizing that someone else had done it in the course of the elaborate set-up. Later Ahsoka accused Anakin, “You didn’t even try to come and help me.” She lashes out from fear, and from doing what she thinks Anakin would do – even as he pleads otherwise. I couldn’t help but think that Ahsoka trusting Anakin, but not being willing to follow him back to the clones, could come in handy later. She’s convinced that her own way is right, or at least sees that as the only thing she can say to him: “You have to trust me now.”

“The Jedi Who Knew Too Much” had many references to Order 66. Anakin unknowingly quoted his later self with “I want her alive,” a line that Matt Lanter imbued with anger. The clones parading around with reptilian bloodhounds were practically a test run for the Jedi Purge, and I liked that they were running under the gigantic, symbolic Geonosis memorial. Geonosis was the beginning of the war, both the last time that the Jedi fought in numbers and won, and the moment at which they sacrificed their peaceful ideals to become generals in war.

The chase sequence was beautifully lit in dark greens and blues, and the action was exciting. 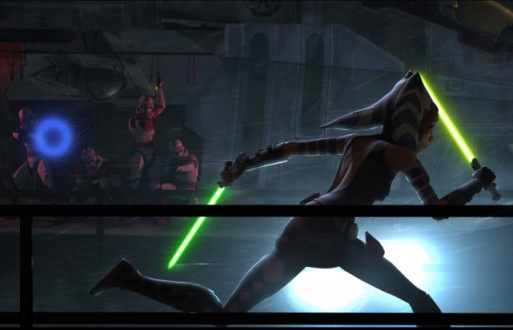 I would have liked to see Ahsoka stumble more than  once, to show that she’s not quite at her best, but maybe it’s too in-character for her to thrive during adversity. I liked the tense moments where she jumped through the blast doors, and how she ended up in tunnels reminiscent of the polar water tunnels seen in Ralph McQuarrie’s concept art for Coruscant. (The cool dinosaurian creatures inhabiting them were a nice touch, too.)

The clones in their gunships reminded me of the masked antagonists in Spielberg’s E.T. or Joss Whedon’s faceless vision of the government. Not trusting the people in power seems to be a common theme; The Clone Wars really has some political complexity.  In the chase scene we can also see how the clones realize they’ll need to use the big guns on the Jedi if others ever go on the run – or to cut them down unexpectedly.

Some of the dialogue was too straightforward and the music, while orchestral and full of body, sometimes tried too hard to emulate the scene-complementing movie scores of John Williams. There’s a careful line to tread between thematic and over-dramatic, and the episode was at times a little of the latter.

But the events were big ones for the galaxy. Ahsoka was very thoroughly framed. My money’s on Darth Sidious as the only one who could use the Force inside the cell from far away. Someone had to cut down those clones with a  lightsaber, though, so maybe Letta was telling the truth about a corrupt Jedi  after all. Last week I did say that I wanted it to be a Jedi who actually committed a crime, but that doesn’t seem so important any more. Order 66 can go on whether they’ve actually done something wrong or not, and we are supposed to be rooting for them.

The fact that Letta hadn’t worked on her own reminded me unpleasantly of Krell’s character defects not coming from simply being a bad person, but being explained away as the result of his falling to the dark side. I also can’t help but notice that the death rate for female characters who aren’t Ahsoka has been two-to-one in the last couple weeks, and that both were female pretty much because they had to be someone’s romantic interest or wife. I’m starting to appreciate Bo-Katan more and more.

In a way it also makes me appreciate Ahsoka. Even though her actions aren’t exactly relatable, they’re strong, and she stands up for herself even if she’s a little bit misguided and a lot being used. 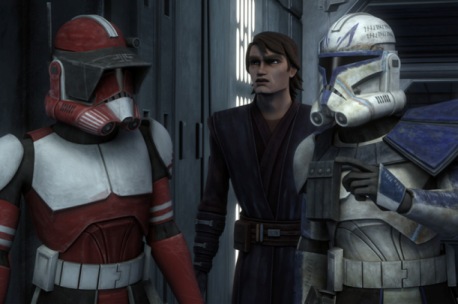 She acted a lot like a male protagonist would – she acted a lot like Anakin would. But that doesn’t mean she should be thinking about how to be “ladylike” while the people around her are shooting at her. Ahsoka takes the only route available to her, and jumps.

“The Jedi Who Knew Too Much” includes some nice continuity. Barriss and Ahsoka mention the time they were trapped in a tank, and Obi-Wan references problems in other systems. The prison corridor was straight out of the Death Star, and the episode clearly points toward Order 66.

If Sidious is the perpetrator, we’ll likely get a direct answer as to how he turned the people against the Jedi. It’ll be bad press if word of a Padawan killing a prisoner and then escaping into the lower levels gets out. It also seems like Tarkin might be in on the whole thing – the sound is conveniently not working on his holorecording, and he pinches Ahsoka’s chin just like he did to Leia. (I guess his creepiness started early.)

I got the sense in this episode that the characters were often saying what other people wanted to hear, or switching attitudes from one scene to the next. Anakin’s anger was capricious. But instead of seeming out-of-character, it was realistic and showed how quickly the infrastructure of the Jedi could fall during Order 66. Jedi are people too. The episode was solid, as much as any of them, and is finally starting to be really directly relevant to the movies and the Star Wars galaxy as a whole.

“The Jedi Who Knew Too Much” was exciting and well-paced, doing a lot while fitting in conversations that didn’t feel rushed. Ahsoka is still pretty untouchable, so determined she’s right that she’ll fight her own people just in case they don’t find her innocent. She believes she’s fooling people into thinking she’s a calm Jedi – and she was right about that until now. But with Tarkin and the mysterious Force-user pulling the strings, maybe her gut feeling is right and the Republic wouldn’t find her innocent at all.