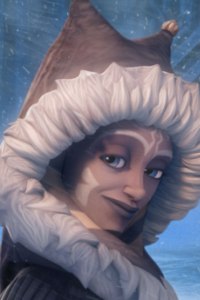 I haven’t enjoyed the more child-friendly episodes of The Clone Wars. Droid adventures and The Wizard of Oz references couldn’t save shallow stories.

However, I loved “The Gathering.” I loved the variety of characters: eight aliens to one human. I loved the bizarre landscapes, the way each trial is catered to each character, the clear moral lessons, and the way the Padawans move in sync and chatter like school kids. I loved that they each have the Jedi sigil somewhere on their clothing and that the Rodian has floppy antennae. I loved that we see baby Ahsoka. (I don’t quite love that Ahsoka was put in charge of a bunch of children, but as the newsreel said, the Jedi are low on personnel. I would have liked a moment to explain that perhaps this is ritual to her, as well, and that she remembers her own trial.)

The first few scenes were a montage of background about how Jedi are trained, including baby Ahsoka being found by Plo Koon in a group of Togruta.  (Avoiding any hint that Ahsoka finding her family might become a story, it is difficult to tell what her parents look like.) It was also cool to see one of my personal favorite characters, Tera Sinube, in the background of an early scene.

The story moves on to snowy, windy Ilum. I liked the ice and crystal surroundings of Ilum, but I tend to prefer stories where a relatively small setting is explored in depth instead of where many large settings are skimmed over. This episode played to my interests, but it played to its own strengths, too.

The six separate stories keep things entertaining, and while some of the initiates use the Force to get what they need, others do not. The voice actors are earnest and talented, although Katooni the Tholothian sounds like she has a cold and Zatt the Nautolan’s lessons are a little too neatly summed up. Petro, the human boy, has the most dramatic ending to his storyline, as well as the greatest challenge to overcome – he is arrogant, impatient, and selfish enough to nearly leave one of his classmates trapped behind a wall.

The design and animation in this episode was wonderful, with cracking ice, a frozen waterfall, and a cave full of crystals looking both otherworldly and realistic. The characters were each unique in appearance, some simply because we’d never seen a child of their species before. How can you not love a snaggle-toothed Wookiee? There were some great details, like how Gungi the Wookiee slid down the ice and how Katooni’s arms shook as she climbed.

Zatt’s and Byph’s stories worked the best for me. Zatt the Nautolan’s reliance on technology leads him to a dead end, but his lesson is to use intuition as well as technology, rather than to not use technology at all. Byph the Ithorian imagines his crystal to be surrounded by frightening imagery that’s almost, but not quite, all in his head. 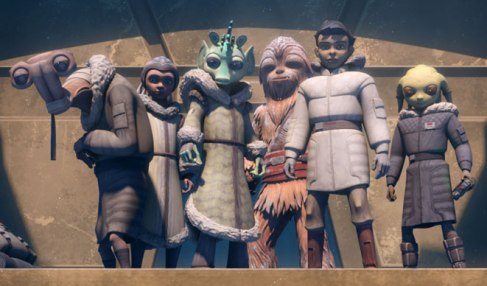 The final bit of charm in the episode is the trick Yoda plays on the initiates to make the gathering more of a challenge. This feels like classic Star Wars: it reminds me of Yoda training Luke, or young Obi-Wan in the Jude Watson books.

Although Yoda is of course the leader of it all, we see Ahsoka acting wise and caring here. The fact that the characters are children also makes gender differences less apparent. The Rodian girl, whose face is subtly feminine, rescued herself, although the more humanoid Tholothian girl had help.

Unlike many episodes, “The Gathering” was really emotionally engaging despite having few adult characters – maybe Yoda’s age averages it all out – and few characters we’ve met before. It was heartening to see the young Jedi succeed. I was as amazed by the beautiful crystal cave just like the characters who fell into it, and the competitive nature of the story meant that the beauty was heightened by a little bit of tension. “The Gathering” broke out of The Clone Wars’ mold to good effect.