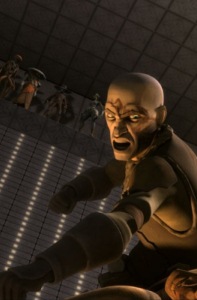 It seems far too obvious to say that stories about fighting tournaments are focused on combat, weapons, and who comes out a winner (or even alive). Such stories are a great way, however, to show off characters and what their personalities become in desperate, life-or-death situations. Science fiction and fantasy books like The Hunger Games and Harry Potter and the Goblet of Fire ideally use their dangerous settings to showcase the people within them as well as the exotic locales.

This week’s episode of The Clone Wars pits Obi-Wan, disguised as Rako Hardeen, against a group of bounty hunters and career combatants in an arena called The Box. The starwars.com teaser for the episode focused on the characters instead of the combat. They included new faces as well as familiar ones like Embo, Cad Bane, and Obi-Wan. With this hint that the episode would focus on the importance of the people as opposed to their Borg Cube-like location, and the current four-part arc doing well on the writing front, I was eager to see how it would continue to explore its characters. Obi-Wan has already had his morals tested while he pretends to be a criminal under the eye of Cad Bane, and the grim ending of last week’s episode showed Anakin growing increasingly disheartened.

Moralo Eval stalks out of his spaceship making hand gestures at the dramatic tan-and-bronze architecture. The reunion between Eval and Dooku is tense, while Obi-Wan remains masked. This was another instance where I thought “shouldn’t they sense one another in the Force?”

Unlike the stories mentioned above, though, the protagonists here aren’t forced into their battle royale. Instead, Eval is in it for the money and Obi-Wan’s going along with him because his mission is to tail him.

The aside to the Jedi Temple is brief. Anakin’s initial reaction to Obi-Wan not being dead is off-screen. He goes to Yoda in a quiet huff. Apparently Anakin did figure it out when Obi-Wan addressed him by name in the last episode, but the odd timeskip in between “Friends and Enemies” and “The Box” dampens down what emotion there really should have been. It’s an odd slip in an arc that always made sure to return to the Jedi characters and their conversations instead of focusing exclusively on the more action-filled scenes with the bounty hunters. Yoda directly tells Anakin that the Chosen One was left out of the plan because he is dangerous. We mostly see that danger manifest as a shadowed scowl, so maybe Anakin isn’t as much of a loose cannon as the Council thinks. Could their paranoia have been what led to his fall in the first place? Just like his being the Chosen One, his temper was something everyone expected of him. It’s a self-fulfilling prophecy. It was a nice touch to see Yoda’s characterization is consistent with The Empire Strikes Back: he specifically tells a Skywalker child not to rescue his friends. Instead of giving a straight answer about what he sees in the future concerning Anakin rescuing Obi-Wan, he says that “uncertain, his future is” and that it’s up to Obi-Wan to get himself out of his adventure.

Before the lineup that was shown in the teaser, the viewer is introduced to the competitors in Dooku’s game through dialogue. I really like the scene of all of them talking, since it gives the viewer the sense that they know the people who are going to be involved in the fights and can be emotionally primed for seeing them in danger.

The introduction of one of the female bounty hunters, the alien Twazzi, is also notable. She is so close to the camera that her hands and feet are mostly off-screen. Her body serves as a scene transition of sorts, which is some clever cinematography. It also establishes her as first and foremost a body, while the males have a voice. Her graceful silence takes up the entire screen.

There’s a funny moment where Cad Bane shoots an Ithorian for possessing what appears to be his Season Two hat. Bane drops his own secondhand haberdashery on his foe’s face and stalks off. “It’s a nice hat.”

The second new female is a Weequay named Kiera Swan, who sports a flower-patterned band around her head that makes her look something like a grandmother attempting to cobble together a ninja costume. The effect is friendly and made me want to know more about her. Dooku says she’s won tournaments like this before.

The Box had some cool aesthetics, from the Tron lines on the outside to a starkly white room on the inside that was reminiscent of the shifting lab chambers from Portal 2. The obstacles the combatants face are creative and bizarre. Energy weapons that look like lightsabers on columns electrocute slower combatants, and a switch hidden behind a force field can only be opened by a serum specific to one species. Dooku is impressed when “Rako Hardeen” maintains a calm demeanor, and glowers at the news that someone besides himself killed Obi-Wan.

I’m partial to obstacle course-style scenarios, and it was fun to see the characters interact in this one. They didn’t have a lot of time, but were visually distinct. One of the problems the episode did have was that it seemed like none of these fearsome bounty hunters could save themselves, and needed Obi-Wan to do it for them. It makes sense that he’s the strongest since he’s a Jedi, but it was strange that none of the others was more prepared for Eval’s test. I also didn’t like the untranslated alien speech: while some babble followed by Eval saying “Unfortunately, no,” is funny, it got a laugh in a way that I felt took my attention away from the episode and toward the image of writers in a boardroom deciding not to add subtitles like the ones sometimes seen in the Star Wars films.

Toward the end of the episode the focus shifts to the competition between Eval and Dooku. The alien wants the “lead role” at Palpatine’s parade, but Dooku sees something special in Hardeen.

The way Obi-Wan gets saved from the last challenge was very unexpected, the final showdown with Eval less so. That fight does provide what may be my favorite shot in the episode: Obi-Wan’s foot striking a video projection on the wall and making a momentary blue outline. Choral music enhances the fight between Obi-Wan and Eval, who I fail to find frightening.

Obi-Wan’s morals stretch but hold. Maybe it’s because I’m over-eager for the next Dathomir arc, but I can’t help but think that Obi-Wan’s penchant for enthusiastically punching people should appear again later when things are even darker. At the end of the contest, Dooku gives Obi-Wan a backhanded compliment and explains the plan to capture Palpatine, in case anyone forgot.

Like the previous episode in this arc, “The Box” was a decent adventure story that didn’t do anything incredible for the Star Wars mythos. The last half of this season has hosted some writers who know what they’re doing. If the future of The Clone Wars can keep to and exceed this standard, I hope that it also focuses more on emotional moments like Anakin’s reaction to Obi-Wan’s survival. (It’s interesting that Darth Maul will be coming back from the dead right on the heels of Obi-Wan appearing to do so.)

So, did the characters shine like I hoped? Not particularly, but the fact that this is television rather than a book means that they are memorable based on visuals rather than characterization. I’d still like to know more about Twazzi besides the fact that she survived. (Kiera Swan dropped out along the way.) The lack of Ahsoka and especially Anakin reacting to the events of last episode was also disappointing.

Overall I also give this one a 7/10, with the whole arc so far standing firmly somewhere slightly better than the average episode. Next week’s “Crisis on Naboo” debuts on the same day that The Phantom Menace is re-released into 3D and conventional theaters.