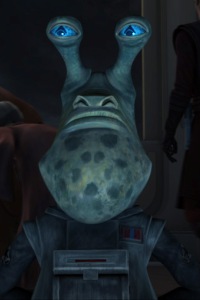 “Secret Weapons” is a light, droid-centric episode that feels disconnected from the rest of the season. It’s not new for The Clone Wars to be schizophrenic in its content, though. Season Four was a perfect example, with its Wizard of Oz-meets-Droids episodes and the continuity-shaking return of Darth Maul. The recent Young Jedi arc unified the child side and the adult side of the show very well, telling a story that was at times very serious and dealt primarily with preteen characters. The show’s desire to target two different demographics, however, does not excuse an episode as unfunny and patronizing as “Secret Weapons”. Assumptions like “small things are funny” and “droids running into walls are funny” just made me, as an adult viewer, unsure what I was supposed to be getting out of this.

The episode introduces a variety of new characters, including Colonel Meebur Gascon, a tiny alien. Commenters on Facebook before the episode aired said that the colonel’s size was an example of the diverse alien biology possible in Star Wars. I might have agreed except that his size is played for humor, and he has two legs and two arms and a frog face. The first scene hinted that Aayla Secura, Tera Sinube, Anakin, Obi-Wan, and an Anx Jedi might also be involved, and I found myself wishing for them later. For a show called The Clone Wars, we’ve gotten surprisingly little about clones or Anakin and Obi-Wan this season.

The convoluted plan takes away any sense of threat. No principal characters are at stake – of course we know R2-D2 survives – and we don’t know what the Separatist transmission is about. Nobody seems to be in danger.

The point-of-view character in “Secret Weapons” is WAC-47, a pit droid who arrives late to the briefing. Its voice sounds young and male. As much as the humanity of C-3PO and R2-D2 contributed to the charm of the Original Trilogy, giving a droid a personality doesn’t work to automatically give it a sense of history and humanity. I simply don’t buy it that a droid would be placed inside the Jedi Temple for a mission without knowing the Temple’s layout. If it was, that’s the clone commander’s fault, not the droid’s. Maybe I’m over-thinking what it means that they’ve introduced a point-of-view character whose flaws and naïveté are supposed to make it/him likeable, but it didn’t work for me with WAC. Perhaps thinking of WAC as a human instead of a machine designed to be useful would make his introduction funnier and less thoughtless.

It is worth noting that while Mace calling a droid “soldier” is something of a promotion on the sentience scale for a droid, it’s a veiled insult to the clones. They know that droids do the same job on the Separatist side of the war, and that they’re mass produced just like droids. Mace didn’t go through a revelation about the clones’ humanity like Obi-Wan did in The Cestus Deception. He seems to see all of his underlings, except his fellow Jedi, as replaceable machines. 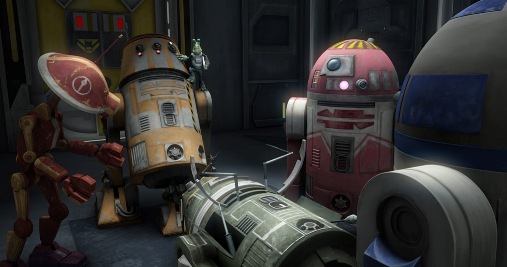 Colonel Gascon is up there with General Krell in the ranks of poor leadership. He says that WAC is “just a pilot.” If WAC is the pilot, then that’s pretty important. He flies the spaceship that contains all the soldiers. If Gascon sees him as less than a soldier, that’s pretty silly. But it’s even sillier for WAC to be offended – if he was programmed to pilot, that’s what he should be good at and that’s what he should do.

Or maybe I’m looking at it from an anti-droid perspective. If WAC is like a human, he should be allowed to do what he wants. But we didn’t see him dreaming of being a soldier before. And if he was human, he would have been assigned a specific role, pilot or soldier, for most of his military career, and the Colonel would have known that. The ability to switch between the two is an unnecessarily complicated droid-only problem. If the goal was to make the Colonel be nasty to his subjects because they’re droids, it comes off as him having a team unsuited to the job and not understanding how the military works. Separatists are also dimwitted in the episode, although that isn’t new – the droids seem to have no way to scan for life forms, so Gascon can sneak in inside one Republic droid’s head.

Mace mentions Republic Strategic Intelligence, something I’d like to learn more about, but the Colonel comes off as just another soldier. It turns out there’s a reason for that: Gascon does have a redeeming moment where he’s revealed as an analyst who’s puffed up with pride at the idea of being out in the field, but he still has General Krell’s arrogance and inability to care about the death of his squad. In a Jedi, that meant dark side. In a non-Force-user, it just means arrogant and incompetent.

Dee Bradley Baker’s turn near the beginning of the episode as military mechanic Dr. Gubacher was certainly memorable. His crooning, scheming voice made me think he was a villain, though, and watching him stroke and pet the droids as he prepared to rip some of their guts out made me vaguely uncomfortable. If we’re really supposed to think of the droids as like humans, there’s some body horror going on here, especially when Gascon pops out of one droid’s memory banks.

R2-D2 is present throughout the episode, but he doesn’t stand out. His strength is loyalty, and there’s not much for him to be loyal to here. He doesn’t take a stand in the Colonel versus WAC drama, and he doesn’t seem especially attached to Anakin. It was bizarre to see him raise his limbs in the opposite direction from where we’ve seen them in the movies, but that’s as exciting as he gets. 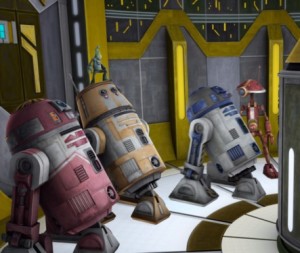 In terms of female characters there is QT-KT, the pink R2 droid. Apparently she is a distinct character from R2-KT, who was developed in honor of the late Katie Johnson, but seems to have the same inspiration. QT is equipped with a magnet and has just as much screen time as the rest of the droids.

I’m not sure why the droids were portrayed as gendered at all, except for one interaction between WAC and QT. After WAC gains the courage to stand up to Gascon midway through the episode, he leans on QT as if that’s a side effect of his being flushed with success. She shifts away and he gestures as if wondering what he did wrong. This is meant to be cute and funny, but it bothered me because it just didn’t make sense. Droids would have no reason to have a stigma against physical contact, and even if somebody could come up with a reason why they did, it’s not included in the episode.

The lack of females is tempered slightly by the lack of humans in general. Very few of the characters have a recognizable face. That’s not an automatic death toll for a story, as evidenced by most of Pixar’s movies, but doesn’t help the fact that the plot has very little heart.

The middle third of the episode is both dull and cluttered. The commander of the Separatist ship has a striking, three-eyed design and a laconic voice, and felt like he deserved to be in a better episode. The majority of the episode is actually a bit like “The Gathering” in that each character showcases his or her own power, although the scene where they got new equipment just felt to me like an excuse to make action figures with detachable parts. The action thereafter had its unique moments – the entire final battle in zero gravity, for instance – but all in all it played out predictably, with each droid getting their time to shine and using only the equipment assigned to them.

The characters are droids because they’re supposed to be funny, not because the episode has any grand statement to make about the meaning of machine life. One of the few things that it did much better than other episodes was to remember that the Colonel versus WAC conflict had happened at the beginning and resolve it at the end. The episode was nicely circular, something I’ve been wanting from The Clone Wars for years. I felt that both WAC and Gascon had earned a little more respect by the end. Still, the whole plot also existed in a tangent, not seeming to matter to any of the major characters. Even R2 lost some of his warmth without his loyalty to C-3PO or their human companions, so it was hard to get the droids’ mission to matter to me.