This time last year I was watching “Water Wars,” the technically proficient but underwhelming premiere of The Clone Wars Season Four. Season Five’s premiere, “Revival,” shows off some of the show’s more gradual technical achievements while also providing an exciting, dark, and funny story that corrects a lot of the faults of last year. This episode did more than barely move the war forward, instead setting up tension between a variety of characters.

The stars of the show this week were Hondo Ohnaka and, of course, Darth Maul. Obi-Wan and Adi Gallia appear, as well. With the emphasis on the Sith brothers’ relationship, this episode created a unique experience for me where I was rooting for everyone – Obi-Wan because he was the good guy, Hondo because he was funny, and the Sith because they seemed to have a lot of room to grow. This was one of the things that made “Revival” an enjoyable episode.

The episode starts out with a clip previously seen on the official Star Wars site, as “the two crabbiest Zabraks this side of the Hydian” take out some droids. Savage wants equality, but Maul sees himself as the Master and his brother as the apprentice, an order he imposes with a neat foot to the face. I have to wonder where Sidious factors in to all of this in Maul’s mind, but for now he is unimportant. 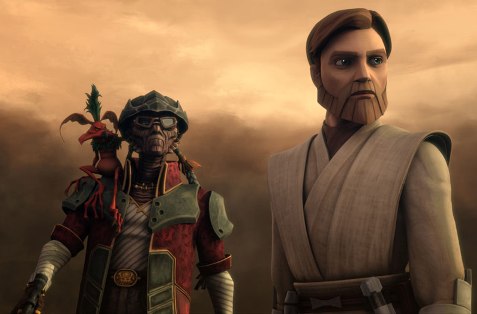 Sam Witwer brings the same qualities to Maul this season as he did last, with less craziness. His voice dips and growls, never quite reaching the softness that Peter Serafinowicz had, but I’m getting used to it. He has a nice range of varied expressions. Savage, the one who seems to have more empathy, sticks mostly to a scowl. I’m also getting used to Maul’s penchant for gathering allies. While I always saw him as a loner, this just is not supported by the new canon that sees him trying to build a power base worthy of a Sith Master. He’s passable at using people around him, plying the pirates with money he doesn’t care for himself, and thinking on the fly (“We’re lords… crime lords.”)

The other big question about Maul is his master plan, which he seems to be keeping from both Savage and the audience. Although he mentioned “the demise of Kenobi,” he tells Obi-Wan that “I have plans, and you will not stand in my way.” Is Obi-Wan a means or an end? Just as I thought I was getting a clearer picture of Maul’s and Savage’s motives, I’m not sure.

This week his crew is a trio of Weequay pirates bribed away from Hondo Ohnaka. Previous episodes focusing on bounty hunters tended to bore me because money is just not an emotionally engaging motive, but now that Hondo has his men to get back and Obi-Wan to tentatively reunite with, he shines. His dialogue, such as “I am semi-speechless” and “You are not the first laser-sword wielding maniac I’ve had to deal with,” is some of the best in the show, and makes him a funny character with panache reminiscent of someone from Firefly.  His red and gold cape gives him a classic pirate look.

The pirates’ crowded camp also shows how far the animation has come. Even on a re-watch of the Season Four finale I noticed that the animators use few characters on screen when possible, but the pirate camp is a nice crowd of Weequay, tents, and buildings.

Hondo also does the very thing I’ve wanted more characters to do – he remembers things. He gives a quick rundown of his prior experience with Obi-Wan and where he’s been since, and the continuity nod does wonders for a show that sometimes seems oddly free-floating in its own universe.

A repeated theme in this episode is that the average resident of the galaxy doesn’t know what Sith are and have to ask the Jedi. This makes sense – and it must gall Obi-Wan to have to explain a faction that’s supposed to be extinct.

Obi-Wan and Adi Gallia confront both Sith in an exciting fight. Gallia has not contributed much to the plot of The Clone Wars: she’s the Council representative, and doesn’t seem to have a lot of her own characterization besides being staid and calm. She’s the only woman present in the episode but no one mentions her gender.

Then there’s the event that, even though quite a few people have seen this episode at Celebration VI or the Lucasfilm premiere, counts as a spoiler. Gallia’s death at Savage’s hand directly conflicts with the storyline in the Obsession comics. It doesn’t touch the movies, though – lookalike Stass Allie can still end up taking Adi Gallia’s council spot before Revenge of the Sith. Gallia’s death in The Clone Wars is unique and violent: before stabbing her with his lightsaber, Savage charges at her like a bull and impales her with his horns. It’s frightening, and reminds the audience that although Savage fights Maul for the privilege of planning their movements, he’s still a bad guy. He’s a more animalistic form of bad, and while it might be interesting to see how his vicious, primitive upbringing could in fact translate in to some kind of innocence, he’s still a Sith. 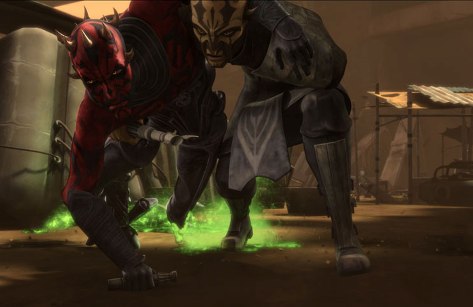 “Revival” succeeds in another place that many episodes fail when Obi-Wan reacts to her death. The music is sad, but what sells the scene is Obi-Wan’s tired voice, his sagging body, and the sense of a calm between storms as he confers with the pirates. His return to face the Sith is the only way to complete his mission, but he does it with a sense of resignation. It’s one of the more effective small emotional moments in the series.

Then we’re back in fight mode, with the brothers ganging up on Obi-Wan. It’s an intense fight. Obi-Wan targets Savage’s knees as if making up for Maul’s lack of them, and there are some great moments involving all three lightsabers. Maul’s cyborg legs are longer than a human’s, and he uses that to his advantage throughout. One character already has been shown to be expendable, but limbs are expendable, too. Obi-Wan follows his penchant for lopping arms off, and suddenly there’s green mist flowing out of Savage’s shoulder. I’m surprised and intrigued by the return of this Nightsister magic. Are the Zabraks more remade than we thought? What does this mean for what Savage can and cannot survive? Maul’s leg, made of metal, also bleeds the green fog when it’s shredded by blaster fire. It’s a bizarre manifestation of Mother Talzin’s power, and I hope it gets explained.

Maul is clearly the stronger brother. His cry of “apprentice” gets Savage moving when Savage can’t believe he can survive. The alpha-male dominance that incited Savage to fight Maul in the beginning is what saves their lives now. This is the kind of framing device I’ve been looking for since the show began, and it makes this episode feel more complete than many others.

The episode ends with Palpatine holding court with Jedi in his red-walled room inside the cool blue Senate rotunda. The scene feels like a hint at things to come. Of course from the trailers we know that the season is leading up to a Sith confrontation, but this is the conniving Senate side of Palpatine, who insists that the Jedi have enough “closure” already and that the Sith brothers are “petty crooks” (as opposed to “crime lords”). It’s pleasantly reminiscent of the way Matthew Stover’s Palpatine turned Mace Windu’s words around in Revenge of the Sith.

I wouldn’t have minded at all if this episode had been an hour long. “Revival” was penned by Chris Collins, a veteran of “The Wire,” and I look forward to seeing what else he has in store for Star Wars fans.