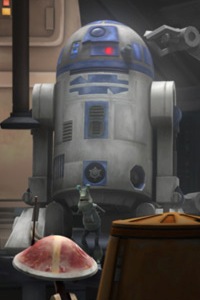 Whether or not one believes in a soul, the human body can be said to be greater than the sum of its parts. Our bodily integrity is important to us. The loss of a limb is not routine. We are aware of ourselves as stewards of our bodies.  In the Star Wars universe, the Force is what binds all things together.

Not so with droids. They can be taken apart and put back together to an extent that would be impossible for a human. The droids in The Clone Wars don’t seem to have an “ick” response when BZ’s head is modified to fit Gascon inside. Throughout this arc of episodes droids have been taken apart, exploded, and modified to suit sentient beings’ needs.

When the D-Squad arc in Season Five started, I wondered whether anyone would question their humanity because of this ability, or learn about them in the way that Obi-Wan learned about the humanity of the clones in The Cestus Deception. Gascon never said directly that he thought the droids were subhuman, but he did treat them as inferior. (I got the impression he would do the same to clones, or any rookie soldiers, which undermined this idea a little.) The arc isn’t an exploration of droid humanity either, not as much as I would like it to be. The lesson seems to be that it doesn’t matter whether the droids are sentient, or whether they are “human” or not, because it is their mechanical nature that gives them an advantage over organic beings.

This arc has been unfocused, at times creative and others hackneyed. It also seems largely irrelevant to the characters who have the most at stake this season: Ahsoka Tano, Asajj Ventress, Darth Maul and Savage Opress. The same is true for “Point of No Return,” the last episode in the arc. It doesn’t forward the plot of the show as a whole. It does not redeem the entire arc. 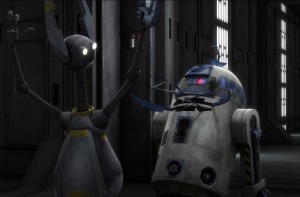 The most I can say about this episode is that it’s inoffensive and fast-paced. The stakes are high, but contrived. The whole Jedi council is supposed to be on that Republic space station, for example, but we only see Anakin and Obi-Wan. Gascon and WAC admit their own fallibility, but only a little. The stakes are purely physical, not emotional, and the episode is pretty much one long chase from one side of the cruiser to the other. Battle droids offered some funny, if bizarre, physical humor, and “I wasn’t programmed for this!” Ultimately, the droids are the only useful ones in the arc. Anakin and the captain of the Republic space station call upon theirs as soon as they need help.

WAC-47 has developed into a less naive, calmer character, and it was nice to see him play off of Gascon in a different way than before. Gascon also grows. In a twisted way Gascon is the fallible character I’ve been looking for; he learns through trial and stalwart companions that he can’t lead by bossing everyone around and making things personal. His speech after a pivotal moment of sacrifice points out some of the ways he’s grown.

“Point of No Return” shows off some nice animation. I liked the long shot of Artoo flying through the halls, and the dead battle droid’s limp hand. The finale was gorgeously cluttered, and Anakin was expressive. Maybe I was just happy to see a human face, but his fear of loss really shone through, and the last two minutes of the episode showed the obsessive confusion between love and possession that leads Anakin to his fall. Anakin peeking through metal struts to look at Artoo was also endearing.

Artoo’s oil-and-fire trick gets ramped up to eleven. I’m afraid I’m biased against what was supposed to be a cool moment: I didn’t like it in Revenge of the Sith and I don’t like it now. I think it makes R2 seem too cruel, and I have to wonder where that power went in the original trilogy. The episode has Original Trilogy homages elsewhere, as well, including Artoo’s sound effects and corridors that look like they were lifted straight from the Death Star. 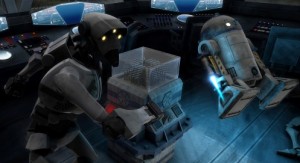 Republic servant droid Bunny has a feminine voice, and is shown to be clever and caring toward the other Republic droids. She’s not gendered beyond her voice. I guess that’s femininity enough, because even Bunny has to be rescued. From the end of the episode, though, it also looks like she’ll become a full-fledged member of the team.

“Point of No Return” serves to emphasize the importance of droids in the Star Wars universe, and if you find action just as enjoyable whether it’s people or droids doing it, it’s fun. It’s not particularly smart, moving from point A to point B, putting droids or people at stake as needed. We never find out what the Separatist transmission was about. Was blowing up the Republic space station a different plan entirely? Maybe they were the same.

Gascon has gained some perspective and WAC now takes orders from him, a little lesson in humility for both of them. But ultimately the episode ends with humor, and their purpose was humor. We’re still laughing at Gascon’s irritation, not with his success. Maybe it’s okay that the episode didn’t quite come together, because if I’ve learned anything from Dr. Gubacher taking droids apart to improve them and Gascon’s needs to breathe oxygen and eat being a shown as a weakness multiple times, maybe the lesson is that it’s okay if things are just exactly the sum of their parts.