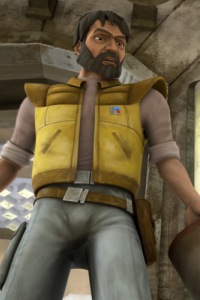 Regardless of mixed reviews, everyone can agree that last week’s episode of The Clone Wars was unusual. “Missing In Action” returns to form while adding Gregor, a clone trooper reminiscent of the lost Cut from the Season Two episode “The Deserter” with one important difference – Cut’s exile was voluntary. Dee Bradley Baker gives Gregor a versatile voice, but on the whole “Missing In Action” is not a particularly momentous episode for the occasion of The Clone Wars turning 100.

After the half-real feeling of the previous episode, I was a little bit of disappointed to see Abafar inhabited at all, not to mention by familiar species writing in familiar Aurebesh. I like the design of the little white Void bugs because they would look eerie right along with the bird-dinosaurs from the previous episode, but the town looks like a transplanted, scarcely-populated Tatooine, and with inhabitants to match. Gregor waving to a passerby was a nice touch, but otherwise the place seemed half-made and empty, except for the diner that serves almost the exact same purpose as Chalmun’s cantina.

Gascon is still insufferable – “A place of eating!” – but his dialogue with the beeping droids in the beginning of the episode at least has a little bit of substance, most of which outlines what happened in the last two episodes and reminds viewers that the encryption module MacGuffin is still important.

The respect that Gascon has gained toward the droids over the last two episodes shows when he smiles at WAC, but is otherwise forgotten. Gascon still rides around in the silent, lobotomized BZ. The little colonel has confidence issues he needs to work out – he’s gone from overblown to nervous via the Void. He insists that the Jedi sent him along on the mission for a reason – only for WAC to tell him that it was because of his size. He remains unlikeable, enlisting Gregor’s help “whether he wants to or not” and seeming oblivious to the clone not knowing his own backstory. The idea of an ostensibly good character dragging another along against their will – or using only the will implanted into him on Kamino – was disturbing.

Both WAC and Gascon treat sentient life lightly throughout the episode, and I hope there’s some sort of note by the end of the arc that this isn’t right. WAC’s quick agreement to leave Gascon to die in the firefight with the battle droids gave me a laugh, and although it might jive with my own macabre sense of humor, it was a surprise after their bonding last episode. Gascon really hasn’t learned much except to tolerate the droids around him. I really liked Gascon and WAC attempting to pace at the same rate together, however, and WAC’s prim, worried “He said to give him five minutes, and it has been six.”

After his conversation with WAC, Gascon gets chased out of a restaurant by a speciesist Sullustan who seems to think that threatening patrons with knives is preferable to having those patrons be Gascon’s size. The A New Hope reference is obvious, but with the EU having explained that many restaurants don’t want droids coming in because they just stand around and don’t eat, I’d like a quick explanation of why Gascon would make for a similar profit loss. Maybe he doesn’t eat enough? The homage breaks the fourth wall in an unpleasantly jarring way when you think about it too hard. 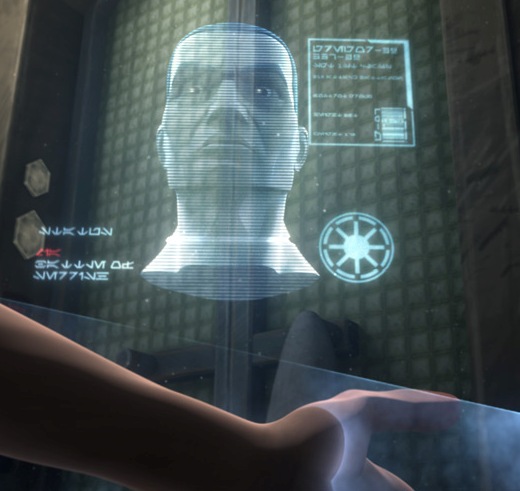 The treatment of female characters in this episode is nonexistent. Even if KT-QT counts, she’s given about two lines, as many as the other background droids who are also relegated to following the major players around. Not that I’m really complaining. Gascon, WAC, and Gregor were the important parts here, with R2-D2 and KT both having their moments fighting against the unexciting protagonist. But the fact remains that there were zero women.

Bearded clone Gregor shows up as Gascon is digging through the trash heap for some food. I like Gregor, and the delivery on “Most people come in through the front door” is a nice combination of clueless and kind without being sarcastic. His dialogue is sweet throughout without being smarmy.

The idea of a super-soldier working as a dish-washer seemed to me to be inherently sweet and full of pathos. The guy has the appeal of a soldier plus the everyman experience. Like most things in the average clone’s life his occupation is not his choice, which sets his story apart from Cut’s.

The writing is not without it’s problems, though. Gregor asks “What’s a clone?” when I would think that the average citizen of the galaxy far, far away would know the definition just like we do here, even if he doesn’t realize there’s a Grand Army of them. Later he questions “So they all look alike?”, showing that he clearly not only doesn’t know that he is one, but doesn’t know what the word means. It could be selective memory loss from the PTSD he shows later, but it didn’t make much sense.

Gregor also reminds me of Luke in A New Hope – flustered and confused, he’s offered a glimpse of a larger world. Voice actor Dee Bradley Baker does a nice job; Gregor is endearing. His boss is more a pastiche than a character, though, and everything about their interactions is unsubtle, including Gregor silhouetted against the weird orange sky.

And Gregor takes the news of his history surprisingly quickly, proving that this isn’t so much a story about him as another set of hijinks for the droids to get into. “I think I know where my armor is” is a bit of a mild reaction for suddenly regaining your memories of horrible war and also being a super-soldier. The fact that the main antagonist is the boss of the restaurant doesn’t help either. The Sullustan wants Gregor as free labor, and has mysteriously gathered information about the Separatists that Gregor failed to pick up. The Sullustan also name-drops rhydonium, a mineral that’s as much a MacGuffin as the encryption codes. 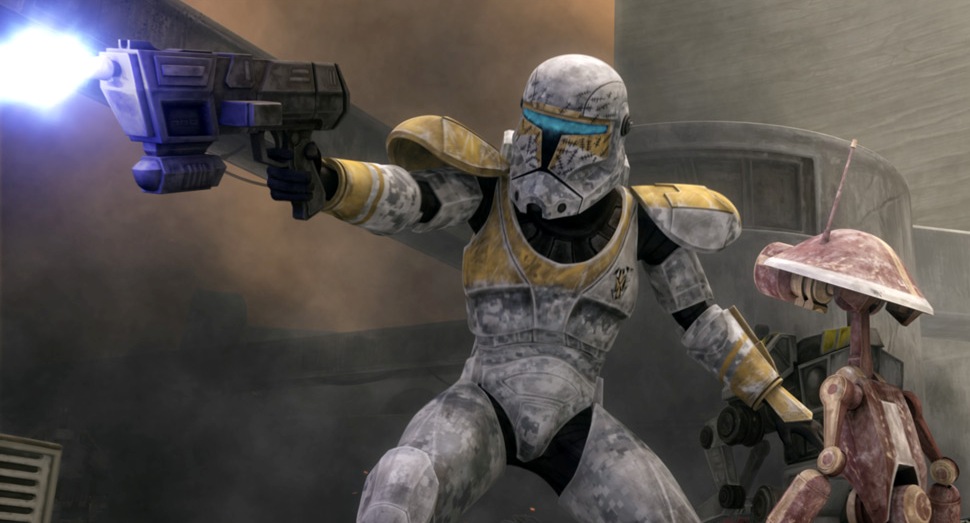 There’s no transition between Gregor as a dish-washer who can’t fight to a sharpshooter who uses clone lingo, with no time for character development between being a civilian and being a hero. That pretty much sums up an episode that I hoped would be about Gregor more than Gascon. (If it’s any consolation, Gregor’s armor has a cool, vivid color scheme – white and yellow and marks that might stand for his fallen comrades on Serrish.)

I was spoiled for Gregor’s death before I watched the episode, which I admit might have contributed to my feeling that the noble sacrifice was a trope that told more about clones and the ultimate soldier ideal than about Gregor as an individual. It’s bound to work differently for different viewers based on how often they’ve seen the trope before and how much their heartstrings are pulled by stories that glorify soldiers — a lot and a lot for yours truly – so the important question has to be, does Gregor’s death serve a purpose? It does prevent the droids from using their explosives, but Gregor simply hadn’t been around long enough for it to be very upsetting. The music again was put to good use, though. The death scene was also a bit frightening and frustrating partially because I felt a Jedi could defeat that number of battle droids with ease. Gregor didn’t have that advantage, and sacrifice is a programmed behavior for him as much as working in a diner was. It’s all he knows, and that’s a twisted kind of heroism.

On the other hand I’m not sure he’s actually dead. Gascon would like to go along with a noble sacrifice narrative, and maybe Gregor’s armor helped him survive that blast. Gascon does hint that we might see him again, but that could be flowery speech more than a hint at the last episode in the droids arc.

“Missing in Action” was frustrating and uneven, with glimmers of potential and piles of cliché in turn, like most episodes. Gregor’s backstory wasn’t enough to redeem the cackling diner owner or the way the episode – and the whole arc – tiptoed around issues of droid sentience and bodily integrity.