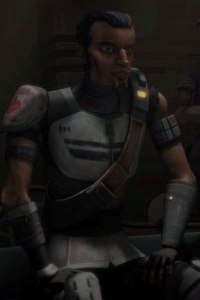 A lot of elements in “Front Runners” reminded me of a video game. Although the rebels’ weapons only work against droids, the human civilians react with fear and surprise when they see an attack, like in Assassin’s Creed. The rebels strategized like friends working their way across a crowded game map. In another instance, when Steela stalks forward the camera follows over her shoulder like in a third-person shooter. The bulk of the episode, though, mirrors real-world politics while using the visual language of games.

The city of Iziz feels alive and full of people, and they’re going through some familiar political dissidence. A larger power stepping in to help a small population overthrow its disliked leader – where have we heard that before? I half expected people to start storming the Coruscant embassy and burning pro-droid literature.

“Front Runners” introduces puppet king Sanjay Rash, whose facial hair immediately indicates that he must be evil. His simplistic way of explaining the situation makes him sound like a petulant child who isn’t being allowed to play with the blocks. The voice actor doesn’t bring anything particularly unique to the role, but he also doesn’t have a lot to work with, such as “Do you really want your crown back that badly?” He accuses the rightful king, the elderly Ramsis Dendup, of starting the rebellions during his imprisonment. Dendup has some nice dialogue – “What you are up against is simply the will of the people. It’s up to the king to embrace, bend, or break it, and I am no longer the king.” – but on the whole the two kings were the least memorable part of the episode.

This episode does well in holding up female role models. Steela is tough and Ahsoka is wise. Steela gets her moment to shine when she takes out a destroyer. Knowing that she’s not so great at rolling the grenades, she modifies her brother’s sliding tactic to push the grenade through the force field manually. 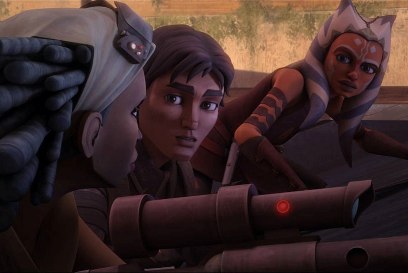 Steela is a strong character – and a strong character with dark skin. She may not have the deepest background, but she is an effective representative of underrepresented women. A kid could want to play as Steela because they like the sniper rifle or her fearless attitude, or just because she looks like they do.

The two women often take on supporting roles in the action sequences, such as serving as the distraction. As the Jedi observer with the rebels, Ahsoka is hampered by the fact that she doesn’t want to draw too much attention to herself. Saw and Lux get more cool action showcase moments than the girls, like taking down the tank and when Saw makes tearing off a droid’s head look easy. Both pairs have their own small storylines, though, and while the men often start the battles, sometimes the women finish them. The males come across as more central to the battle scenes, but just barely, and the episode is still basically from Ahsoka’s point of view. It’s a good episode for gender equality, but that doesn’t necessarily mean that the stories of the people involved are fascinating.

The character dynamics from “A War On Two Fronts” continue to be developed. Saw’s and Lux’s interactions remain a bit testy, with Lux succeeding at taking out a droid and Saw pushing him around. Saw and Steela also show some sibling rivalry, which comes to a head at the end of the episode. His line “I was gonna do that” sounded sincerely brotherly. Steela throws the gauntlet down by calling Lux “handsome”, and again I’m struck by the apparent age difference between the two. Even if he is a few years older than Ahsoka, it still feels a little awkward to have an adult ogling a teen. Ahsoka and Anakin get their own little side story as he tells her that he knows what it’s like to lose focus – code word for “want to be in a relationship with someone” – during wartime. Obi-Wan, standing right next to him, doesn’t comment. 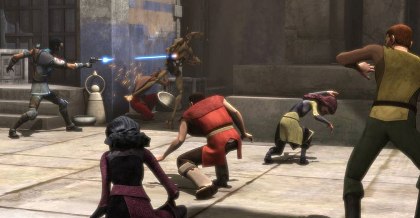 The weak points of this episode were King Rash’s dialogue as well as some of Lux’s, when he explains a plan the audience just heard explained less than a minute earlier. The strong points mostly came in the animation: Ahsoka crouching on a rooftop, looking much more animalistic than the humans around her; the movement of the Jedi cloaks; and the action scenes that made me feel, like in a video game, that I had some sort of connection to the characters.

“Front Runners” was an entertaining episode with more sensible politics than usual, some of the usual strangely stilted dialogue, a slow development of the love triangle, and an abrupt ending. It almost seems like the episode might have been made to fit directly into the next episode, but they were not aired together. The title also seems to call forward to the next episode, or to the rebels who inspired the civilians to join them.

Some scenes seemed like the writers threw the characters’ names into a hat and pulled out two of them to see how they would interact. It would have been very interesting if we had more backstory and if each scene could be longer. The half-hour format seems limiting, but there are a lot of other shows that pull it off an evenness among the scenes more successfully. I’m glad that this is a long arc – a lot would have been lost if they used fewer episodes. Next week features larger-scale battles and a new villain, Kalani.