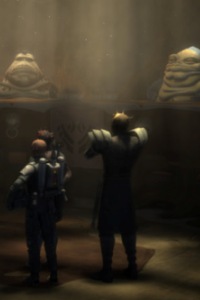 “Eminence” was not the most cerebral half-hour ever. It was not even the most cerebral episode of The Clone Wars. I had to get past some aspects that bugged me before settling in to enjoy it, but after I did I appreciated “Eminence” as an episode that draws the viewer in and refuses to let go, throwing in images of new alien species and dramatically colored vistas before whirling off to the next set.  Unfortunately it also fails to answer a lot of questions, mostly serving to set up a battle.

The animation is wonderfully detailed, from the frost on Maul’s skin at the beginning of the episode to the characters interacting in the background of the Mandalorian camp. Unlike most scenes, I actually believed that there was a large army there. The episode also has some great moments without dialogue, where atmospheric coloration and music make the galaxy feel grim and real.

It’s interesting to see the Zabrak brothers vulnerable at the start. They owe their lives to the Mandalorians, but don’t think that makes them owe any debt. Death Watch isn’t particularly trustworthy, either. Pre Viszla doesn’t seem blind to Maul’s dismissive attitude toward him. By the end of the episode he seems to know that the Zabraks plan to betray him, and he intends to return the favor. Maybe he doesn’t have as much “honor” as Maul thinks he does.

I have no stake in Death Watch and almost none in the pacifist Mandalorians, so Death Watch as a whole felt like simply a plot point. Things that annoyed me before, like the darksaber, still annoy me, while Viszla’s rocket pack and helmet with its claw symbol are still cool. (Both, of course, are basically Original Trilogy designs.) 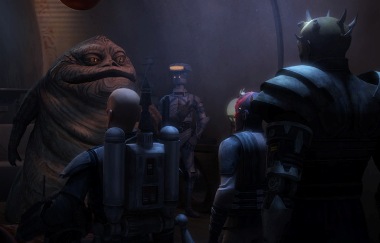 Viszla himself is less slimy than usual, so he ended up functioning as a pretty stock bad guy.

I still don’t love Maul’s voice acting. Peter Serafinowicz sounded like he was lounging at the beach all the time. Sam Witwer sounds like he’s constantly in pain or out of breath.

The idea that Maul wants to be a crime lord still doesn’t sit right with me. In The Phantom Menace Maul was the apprentice, always in the middle of the action but never orchestrating it, and I saw no evidence that pointed toward him wanting more than that. When he says he wants to rule a criminal empire, I’m just not sure why. Maul has expressed multiple times in the Expanded Universe that he feels either disdain or ambivalence toward the underworld, and that non-Force-sensitive people are second-class citizens. Maul might want to gather an army, but I thought he would be a bit more elitist about his method of conquest.

If Maul’s main goal is revenge against Kenobi, it would be more than possible for him to go after Obi-Wan in The Clone Wars without making all these roundabout, albeit cool, plans. How many times have we seen Obi-Wan stranded on a planet with no one but a few other characters to help him? Maul should have started tracking him individually long ago.

In addition, I can’t imagine Maul as a Jabba the Hutt type who sits and eats while other people do his dirty work for him, although he does seem content to let Savage do that a few times in this episode. Maybe he’s easing into his role as Sith Master, treating Savage like Sidious treated him. When Maul worked with Sidious, Sidious was the brains and Maul was the brawn. Now Maul is both the brains and the brawn, leaving Savage to be… What? The reluctant, morally conflicted brother who’s not quite smart enough to know it? 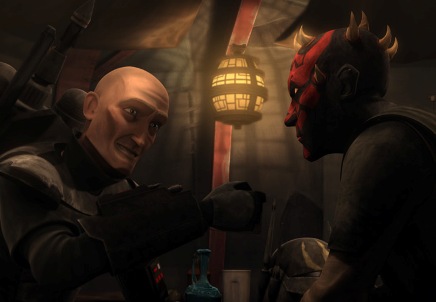 Savage seems to be along for the ride. And I still want to know whether he realizes he killed Feral; the third brother who was so important to him is now a non-entity. In a way, Savage reminds me of Tahiri Veila: he is a patchwork being, remade in multiple images. Tahiri, however, spent quite a few books figuring out how to fit them together, but Savage seemingly ignores the changes.

On the other hand, the Maul in “Eminence” is more like his movie self than the Maul in “Revival.” He’s quieter, expressing himself a lot through glances and facial expressions. It helps that he also looks like Maul. Although I loved his mechanical legs, the elongated gait was distracting, and thanks to the Mandalorians he looks human again. He is less bombastic in this episode; it seems to be pain that prompts his more flowery language, and he pretty much stops proselytizing after he is repaired. Oddly enough it was as he sipped his tea, finally clothed and repaired, that I felt he was fully back.  The previous scene where he walks and talks with Pre Viszla also really felt like part of the Star Wars world, perhaps because it mimics the angle at which the scene between Sidious and Maul in The Phantom Menace was shot. Maul also asks good questions, picking up on the paradox of warriors having trouble defeating pacifists. Some of the dialogue still didn’t make much sense, though, particularly the “burden of peace” that Maul mentions.

The rest of the cast includes three female characters. Latts Razzi and Sugi held their own as part of the bounty hunter team. One of the longer, more lingering fights of the episode was between Darth Maul, Sugi, and Embo. Bo Katan still doesn’t do much for all her hype, and I’m getting eminently (pun intended) tired of moments that should illuminate a character’s motivation being reduced to significant-but-ambiguous glances. Bo Katan presumably shares Pre Viszla’s opinions.

She mistrusts Maul at first, but after she’s been Force-choked she smiles at Viszla like it was all a ruse to get Maul to help them.

The latter half of the episode is divided into segments that make it feel longer than its 22 minutes. I’m of two minds about the set-piece fights that allow Maul to gather his army: they are very entertaining and creative combat sequences, and reuse environments to good effect. There was a certain thrill in seeing characters who I never expected to see tossed together interact: watching Darth Maul versus Embo and Maul stalking into Jabba’s Palace was like seeing alternate-universe fan fiction come true. These scenes also make the last half of the episode feel choppy and rushed, though, and don’t give us much of a deeper look into the relationship between the brothers.

I enjoyed seeing Black Sun and the Falleen, especially comparing it to the Darth Maul comic series, where Maul single-handedly killed a group of Vigos. It takes a lot less time for him to dispatch one with an army of Mandalorians behind him, and the scene moved quickly.

The fight in the Nal Hutta  palace pulls no punches, with characters rolling around on the floor and being attacked by animals. The choreography, fantastic as usual, ensured that at no moment did the viewer feel like the central characters, Maul and Savage, had a moment to catch their breath. Sugi’s and Embo’s attacks come from unexpected directions and have unexpected outcomes, and I was rapt.

But in the end it’s all a bit convenient. The Pykes had an eerie design but no setup. It seems a bit unlikely that the death of a Falleen vigo and the switched allegiance of his army would go unnoticed by Black Sun at large, or that Jabba the Hutt would simply give in to threats.

My final point about “Eminence” isn’t about the plot. I found out via Big Shiny Robot that a shot of the decapitated Falleen had been removed by Cartoon Network censors. In hindsight, the censorship was obvious. I had found the scene confusing in the episode, and was left wondering whether Savage had really removed everyone’s head in one go. But I also considered that it would be impossible to show the answer and didn’t think more about it until I read it had been censored. The cut shot disrupted the scene a little but, I felt that it was appropriate to take out the severed heads for young children. Finding that the scene had originally been in place was jarring. Although bloodless, the scene was graphic, and I was glad it was removed. A show does not necessarily need to be violent to appeal to adults.

“Eminence” was one of the more visually distinct episodes of The Clone Wars, with memorable fight scenes and Maul returned to his more recognizable self. It was fun, but it could have been a lot smarter.