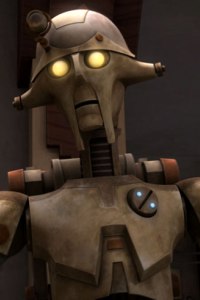 The second episode in the Young Jedi arc brings back the popular and hilarious Hondo Ohnaka and introduces David Tennant as a droid called Huyang, but also shows Ahsoka in a new light.

This is one of the first episodes where knowing that Ahsoka is a Padawan herself is unimportant. The show treats her as a fully-fledged Jedi: this is not a mission Anakin sent her on, or one designed to prove anything about flaws he noticed in her. She hasn’t officially been Knighted yet, but separating her from her role as a Padawan allows the episode to show her more clearly as an individual. The reason why she was chosen to attend “The Gathering” should have been explained last episode, but it wasn’t, and it doesn’t really matter any more in “A Test of Strength.” Ahsoka is a good teacher. Her response “It is now!” when a trainee asks whether the pirate attack is part of their training shows a willingness to roll with the punches that fits the Jedi Zen mindset.

I especially liked Ashley Eckstein’s voice acting in this episode. She conveys at times that Ahsoka is making up parts of the plan as she goes along. If this was the first episode I saw her in, I might have liked her more than when she was attached to Anakin.

The younglings are once again endearing. They push one another playfully, put a blast helmet on each other’s heads, and seem generally amazed by their lightsaber-crafting task. When Petro says “I’m going to challenge Obi-Wan Kenobi to a duel, and kill Grievous,” he sounds like most young Star Wars fans. I’d like a whole episode about how the younglings get along and how lightsabers are constructed, but if a plot has to come along, it might as well have Hondo.

“A Test of Strength” also has David Tennant, very recognizable even with a mechanical echo behind his voice. He introduces himself as Huyang, an “architect and lightsaber designer.” I immediately wondered why this was a droid’s job; he can’t be able to feel the Force. The Jedi younglings want to know too, but don’t really get a clear answer except the hint that Huyang is a thousand years old. Perhaps the kind of knowledge he has requires too much experience to acquire in most species’ lifetimes? We may never know, but Huyang is an enjoyable presence anyway.

With the same aplomb and awe at the universe he shows in Doctor Who, Tennant names creatures and places that I was relieved to find don’t have Wookieepedia entries. Names like the Kartusian Whale and Black Onk will, for a short time at least, remain mysteries that make the Star Wars universe sound bigger and more real. Lines like “Strong in battle, and humble in retreat. What connects with your Force?” do that too. The idea of “your [individual] Force,” suggesting each Jedi taps into a separate but equal power, may be the most interesting idea hinted at in The Clone Wars in quite some time, but the fact that it’s passed over instead of turned into a plot point works fine too.

That leads us to the plot itself. Hondo spots the Jedi ship thanks to some unknown contacts and decides to steal the crystals. Joss Whedon has said that his space bounty hunter Jubal Early in Firefly was inspired by Boba Fett; in turn, Hondo’s space walk reminded me of Early’s scenes outside the Serenity. I was almost expecting a “This is not a holo!” joke when Huyang suggested the younglings hide in a ventilation shaft, and Hondo was on the same wavelength as I was when he said “It’s the oldest trick in the book!”

The zero-gravity fight was exciting, and after a pirate flew out into space I was worried that both Hondo and Ahsoka might take some serious damage. The fact that Ahsoka actually does made me raise an eyebrow. She’s not exactly a damsel in distress, since this could just as easily be classified as the wise-mentor-takes-one-for-the-team trope, but there was a strange sensuality in the way Hondo stroked her face after a pirate knocked her out that would almost certainly not have been present if she was a male character.

Of all the younglings, Petro, the human boy, gets the most attention this episode, although he is balanced out by the other important plotline featuring Ahsoka, a female alien. Zatt and Ganodi had their own mission, but it’s Petro whose lesson from last episode carries on into this one, in a way that practically erases the moral he learned last week. He is still impatient and stubborn, rushing his lightsaber to completion and deceiving Huyang when he’s supposed to hand over his crystal. 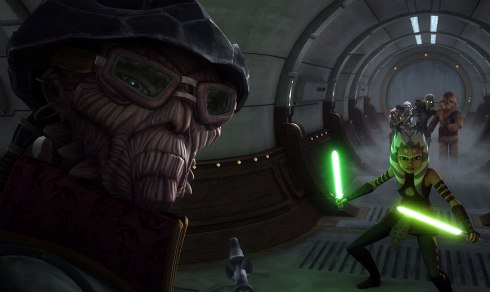 His overconfidence really is his weakness when he fails to activate his incorrectly assembled lightsaber, but it’s also shown to be a good thing when he uses it to incapacitate a pirate in what is, despite Hyuang’s earlier words, a non-lethal explosion. Petro turned his overconfidence into a strength after “The Gathering” earnestly presented it as a flaw. I don’t mind the episodes being morally complicated, but “The Gathering” worked well partially because it wasn’t. The idea that doing a shoddy job of constructing dangerous equipment and then stealing a power source could save a child’s life isn’t exactly the sort of lesson to put on a fortune cookie. Especially since there are many instances in the earlier seasons where Ahsoka’s headstrong decisions also netted her victories, this feels like repetition of both character type and lesson, as well as reversing the change of heart that allowed Petro to get his lightsaber in the first place. The Clone Wars may have taught that looking out for yourself is a bad thing, but it’s also presented as the best way to forward the younglings’ plot. After a breath of fresh air in “The Gathering,” we’re back in the usual muddy moral waters as The Clone Wars attempts to do too much at once and fails to make it all work.

“A Test of Strength” was enjoyable as an action story, but the younglings still haven’t quite clicked as a group. I’m curious to see what happens to Ahsoka next week.