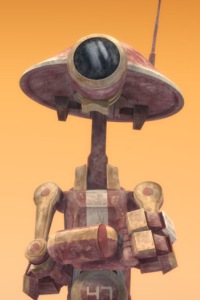 This week’s episode has my favorite title ever. “A Sunny Day in the Void” is clever, a little bit scary, and pulpy without reaping any of the downsides of that association.  Unfortunately the title screen is still blue, meaning we haven’t yet passed those droids that so disappointed me last week. This week they’ve got a bit more to work with – by which I actually mean less. Writer Brent Friedman described the episode as “minimalist” and “an existential crisis,” and doesn’t disappoint. The backgrounds on the planet Abafar match this theme nicely, with not even a sun in sight. I’d love to see the main three Jedi subjected to the same kind of situation. Although it’s heavy-handed at times, “A Sunny Day in the Void” pursued directions no other The Clone Wars episode has ever gone.

The beginning of the episode continues in the same vein as “Secret Weapons,” but the episode takes a drastic turn a quarter of the way through. In the beginning Gascon is still cold toward the droids, referring to a fallen one as “my command center” until Artoo tells him to be a bit more polite. One scientifically implausible comet later, I actually liked a moment in which Gascon presses his hands against the viewport. This is good both because we’ve never seen a character do this on the bridge of a ship before, and because you can pinpoint the moment where he realizes, as the viewport cracks, that he’s the only being on the ship who actually needs oxygen to live. This mechanical-versus-organic conflict, where being organic sometimes seems no more than an inconvenience, carries throughout the episode.

Artoo is more central to this episode, fixing the ship’s engines and saving his companions. It also amused me after last week that Artoo thinks that WAC is “just a pilot” too.

Besides the fact that R2-KT is the first droid to need rescuing, the whole episode is gender-neutral. That is to say, male. This could be a discussion unto itself, but would really just distract from the fact that gender isn’t brought up in the episode.

WAC ends up as portrayed as something between organic and droid – not as focused on the mission as Artoo, he wants to toot his own horn just like Gascon. That’s why he’s the one who stays with Gascon, and why it’s sweet instead of obnoxious when WAC’s first move as a corporal is to imitate Gascon’s bombastic mannerisms. Unlike “Secret Weapons,” this episode has some moments where characters obviously have changed from being around one another. 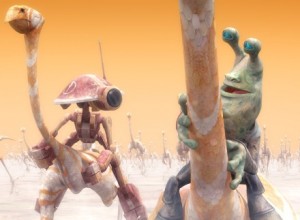 The animation this week is impressive, with a lot of ice and snow effects. Parts of the comet storm, though, looked strangely unmoving.  There’s a gorgeous scene with dinosaurian creatures the same creamsicle color as the planet.

The episode is definitely unsettling in the way that Friedman intended. The planet is eerie and memorable. Gascon’s inability to describe a way in which he is fundamentally different from the droids is a bit frightening, and made me think about how I would try to explain to a sentient machine the difference, not to mention the superiority, between it and humans.

Several of the darkest moments in “A Sunny Day in the Void” involve WAC and Gascon, and that’s when the dialogue is best. There’s the absolute grimness of WAC telling Gascon “When you die, I should lead D-Squad.” WAC wonders aloud whether it’s possible for Gascon to do anything with dignity. It’s hard to blame him after the point at which the episode could be put in a kid’s dictionary next to “existential crisis”: when Gascon yells “Why is this happening to me?” WAC continues to not understand the organic sanctity of life and casually suggests Gascon might kill himself – and suddenly the bumbling unfunny alien has become part of what might be the darkest, albeit bloodless, episode of The Clone Wars yet. My respect levels for Friedman have gone up, at least in terms of his bravery.

That respect skyrockets some more when the episode makes a comment on religion. Gascon stares into the sky and demands “Show me a sign!” This prompts WAC to remark to the other droids, “I do not know who is talking to. Maybe whoever programmed him.” This is making me think, especially coupled with Gascon’s earlier inability to come up with an inherent reason why organics are better than droids. I feel his confusion. It would have been different if the droids had a more capable leader that they liked, but that’s not the story Friedman wanted to tell, and from this perspective “Secret Weapons” seems like the opposite side of the “A Sunny Day in the Void” coin. Gascon had to be silly in order to be reduced to uselessness here. 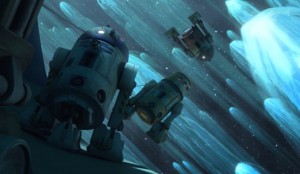 The episode isn’t perfect, though. The dialogue is far too obvious at times, with Gascon saying “Maybe I need to change how I see things” word for word. The signs of a character going crazy are pretty obvious, too. Gascon hasn’t changed much by the end, still bossing around his droids and disregarding other beings; he almost stamps on a dinosaurian creature’s eye as he clambers around it. And there’s no hint that he’s particularly disturbed by what I thought was a central problem of the episode, droids actually being superior to organics.

Nevertheless, this is the first droids-plus-concept episode that’s worked for me, and it worked well. It must be a challenge to a writer to pen an episode that intends to be about nothing, and Friedman pulled it off. He gets more points for doing it with four characters who can’t speak and two who speak in very silly ways. I found myself more emotionally engaged with The Clone Wars than I have been in a long time as WAC spoke lines like “Giving up is not in my programming. I am surprised that it is in yours.”