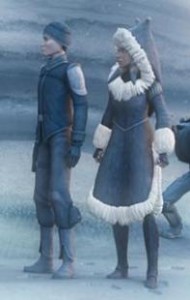 With impressive credentials for the creative team charged with this week’s episode of The Clone Wars, I had high expectations. Director Dave Filoni has helmed Lucas Animation’s groundbreaking and ambitious foray into animation and been lauded for helping shape Ahsoka Tano into a Jedi hero relatable for children. Head writer Christian Taylor, known for his work on Lost, penned this interlude meant to highlight the female Padawan’s development before this season closes with two four-part arcs that will focus on Prequel Trilogy stars Obi-Wan Kenobi and Darth Maul. Filoni and Taylor have overseen a show in which fans eagerly await what happens to Ahsoka, since she’s one of the few characters whose fate is uncertain. As a female viewer who really, really wants to be able to identify with Ahsoka, I hoped to see this pair work some of their storytelling magic. What we were given instead was an episode that relied on standard tropes and production tricks to move Ahsoka’s arc forward.

I’m currently reading Darth Plagueis, and the first scene of “A Friend In Need” reminded me favorably of the Republic/Trade Federation negotiations in that book. They’re a bit muddled, but it’s nice to see familiar faces – the duchess on her throne, Ahsoka acting in Anakin’s stead as Padme’s Jedi guard.

And then it’s meaningful stare time as Lux and Ahsoka linger over the word “friend”. If quavering, big-eyed fawning could kill, well, most of the cast of Twilight would be dead right now, but never mind. Lux gets dragged off for speaking out against Count Dooku.

The Count’s voice actor gets points for the combination of menace and absolute inability to care that he injects into “I do a lot of things, and choose to remember them in order of importance.” It’s creepy, considering that he’s talking about murdering Lux’s mother.

Ahsoka is definitely strong in this episode, and if you’re looking for female empowerment then she does bust her (male) friend out of the Separatist base pretty much single-handedly. Her moves were cool, and there were some nice glass shattering effects from the animators. The episode does a good job of showing she has gained more fighting skills over the four seasons.

Lux’s characterization is decent, at least as far as his motive is concerned: feeling betrayed by the Republic, he’s going to try to avenge his mother however he can. This leads us back to the Death Watch, last seen in Season Two when we were introduced to Duchess Satine. Their inclusion was incredibly polarizing for the fans of Karen Traviss’ Mandalorians, and bringing Death Watch back makes sense in-universe but almost guarantees that the disenfranchised audience won’t be coming back any time soon. 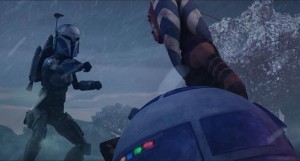 Other fans, though, have been giddy at the prospect of Katee Sackhoff voicing the Mandalorian warrior Bo-Katan. We know that Dave Filoni altered her introduction slightly, to change her pose from one hand on her hip to a more warrior-like introduction with her hands at her sides. This told me that he wanted her to have less of a sashay and more of a grounded stance, and I was curious to see how this translated to her character. While not familiar with Sackhoff’s other high-profile geek culture role in Battlestar Galactica, her voice is a nice change from the usual The Clone Wars mix of accents and breathiness, and reminded me favorably of Jennifer Hale’s Commander Shepard in Mass Effect. The hand-on-hip, and sashay, comes back a couple shots later, though, and Bo-Katan assesses Ahsoka in pretty much the same way as the slaver queen did an episode ago. I had been excited about the possibilities presented by a female Mandalorian. She is practically a non-entity, however, with about three lines in total.

Death Watch leader Pre Vizsla is back, with more attitude and less hair. One of his first lines – “Tell your woman to leave us” – concretes my dislike both for him and for the dialogue. Also, even though Lux and Ahsoka are somewhere around fifteen or sixteen, no one seems to think it’s unusual that they’re “betrothed.” Ahsoka gets what is presumably her first kiss in this episode, but the scene shifts immediately to Lux and his plans instead of Ahsoka’s emotions. Despite the supposed focus on Ahsoka’s feelings toward Lux, it’s an oddly emotionless episode. Whenever they discuss their relationship it’s in the context of the Republic/Separatist struggle, which certainly makes sense for a Jedi and her client, but there’s no undertone of good chemistry between them, or even much of the more likely teenage awkwardness. The romance element is largely ignored except for the diversionary kiss and the google-eyes in the first scene. The writing fails to achieve any balance between the characters’ emotional state and the fight they’re in, instead sidelining the former so that more screen time could be given to another Artoo-saves-the-day plotline.

This episode is best described as “sort of silly with some fun action scenes and fire.” I give it a 3/10. Up next week: someone appears to have died!