Set five years after the film Revenge of the Sith, Tarkin is the story of the man who would one day order the destruction of Alderaan. The main action focuses around the theft of Moff Wilhuff Tarkin’s personal ship while he and Darth Vader are working to investigate a resurgence of Separatist technology being used in guerilla attacks against the Empire. 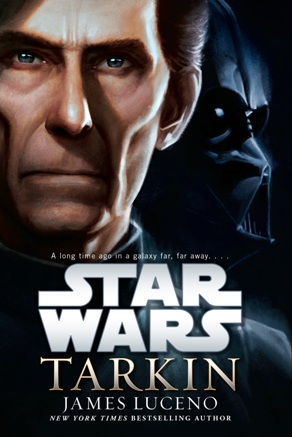 If you can make it past the opening chapters, Tarkin has some interesting bits of information for you. If you’ve wondered what made Tarkin the cold, calculating character you briefly saw in A New Hope, you’ll get your answers here. You’ll learn how much he knows (and doesn’t seem to know) about Darth Vader, the Emperor, and how the Empire runs. But for me the most compelling insights weren’t about Tarkin – they were about Vader.

Author James Luceno’s Vader is imposing but he’s definitely not just the Emperor’s dark side muscle. This Vader is a bridge between the increasingly frustrated Jedi Anakin Skywalker seen in The Clone Wars TV series and the distant, “more machine than man” Sith Lord that appears in A New Hope. His military experience from the war shows though. He’s adept in the Force and the biggest threat to the dissidents who stole Tarkin’s ship. He’s clearly working with Tarkin only because the Emperor told him too, but since this is not his story his thoughts on the Moff remain a mystery.

Tarkin is not without its issues. There were moments where it seemed Vader and Tarkin were way too high ranking to be the ones actually chasing down the ship; although one could argue that if anyone could get the job done, it should be them. Vader has his strategies and the Force. The soon-to-be Grand Moff excels at pretty much everything.

According to the book Tarkin is a great hunter, pilot, fighter, strategist, politician, commander, judicial officer, and athlete. Everyone believes in him and his abilities, even his enemies. He seems to be the only Moff the Emperor even begins to trust. When he’s in a dangerous situation it never really seems like he’s personally in danger. People tells stories about his accomplishments and make up tales that make him seem even more accomplished. At one point, I was pretty sure he could easily get a job on one of the CSI TV shows. And even when he makes a mistake, it tends to work out for him in the end.

There are elements that save him from completely veering into Mary Sue/Gary Stu territory though. Tarkin didn’t rise to his rank overnight and he’s definitely not a wunderkind. No one seems to fawn over his looks and there isn’t even a hint of any romantic situation. Let’s not forget his giant ego, questionable morals, and doctrine of fear. And for all his ability to see what others can’t, he seems to miss out on several items right in front of his nose.

It’s intriguing that, in a way, Tarkin is the flipside of the credcoin to the first post-Legends Star Wars book, A New Dawn. Independent agents aren’t willing to stand for what the Empire has done in both. In one they’re the heroes, in the other they’re a nuisance. But after the diversity of characters in A New Dawn, I was disappointed that there were so few female characters on either side in Tarkin. The book saw five in total. And no, none of them answer to Mara Jade or Natasi Daala. Four female characters are there to show how good Tarkin is at what he does. They are concisely built up just to have Tarkin tear them down. The fifth female is his mother. She has the least page time and is pretty much just there to show that he had a mother.

So while there is a lacking with some characters, locations do not. Luceno writes such vivid descriptions for places. It was easy to feel the murkiness of Murkhana, the wilds of the Carrion Plateau, and the strict order of Emperor’s seat of power. But for such a slim book with such clear settings there was more than a fair share of redundancy too. Several times characters would reach the same conclusion separately from each other but with almost the exact same phrasing. There were scenes and perspectives that didn’t seem necessary for the story or retread previously shared information with only the smallest of additions. Furthermore while there were plenty of ties to other works in the Star Wars universe, several were heavy-handed.

So where does all this leave us?

I love Star Wars and I want these books to be better. The Star Wars fandom is already pretty big but in the next year the fandom has the potential to expand tremendously. With a new movie on the horizon, longtime fans who’ve never read a Star Wars book might start looking for one to pick up. And many of the newer fans may very well want to read a Star Wars book too. I want to enthusiastically be shoving a new story into their hands. I don’t want to be saying “Well… you can read this one… I guess.” Because that’s how I feel about this one. If you really really want to know more about Tarkin, knock yourself out.

Kay grew up wanting to be an astronaut. After seeing Star Wars, she wanted to be Princess Leia, Han Solo, and an astronaut. Life’s taken her on a bit of a different path for now, but she’s still a Star Wars fangirl at heart who enjoys surprising people with how geeky she really is. A voice actor, photographer, and artist who also consults in communications and marketing, Kay spends the little bit of free time she has reading, dancing around, writing, learning and, of course, making pew pew noises. You can follow her on Twitter.