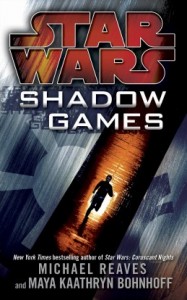 Shadow Games is ostensibly a mystery novel. Billed as Star Wars noir in the tradition of co-author Michael Reaves’ Coruscant Nights, its central question is “who framed Javul Charn?” Charn is a pop music artist, the “holo-star” of the book’s erstwhile working title. The novel, though, also brings up a second question: how to pay homage to the original trilogy and the early Expanded Universe, namely Shadows of the Empire.

Michael Reaves wowed me with his Star Wars series MedStar and Coruscant Nights, both of which feature an array of characters outside the usual range of Star Wars occupations: we get journalists, musicians, non-Force-using martial artists, and doctors along with the Jedi and bounty hunters that are Star Wars staples. I had high hopes for a novel with his name on it that featured a crew of new characters, including a singer. Reaves and Steve Perry in MedStar were great at showing how characters relax and what they do on their off time; I thought Javul Charn should be a great exploration of how the ones who provide entertainment for the masses do the same thing. Add in a female author relatively new to the Star Wars universe, Maya Kaathryn Bohnhoff, working on the central female character, and maybe this book can make up for Fate of the Jedi sidelining its women.

That’s a lot to live up to. It’s not really fair to judge a book based on the authors’ other work or my own fanfiction-like expectations, though, so my first goal is to see how Shadow Games holds up as a mystery-adventure story.

The book is pretty fast-paced, flitting from Dash Rendar’s personal narrow escapes to the ones he goes through with Charn. Her concert tour means the reader gets to see a variety of planets, from classic Tatooine to The Clone Wars’ Christophsis. Along the way they are hunted by Black Sun Vigos and assassins. Their flight also has set-piece blaster battles and space escapes, although only one – about three-fourths of the way through the book – really excited me. The authors’ prose during fights shows some cool moves but is, as with many tie-in novels, dry. The main question of the book is why so many people are after Charn.

Dash Rendar is the point-of-view character throughout most of the novel, with some notable exceptions from Charn’s perspective. As her security chief, he’s being paid to keep her safe, but for the first half of the book she keeps things from him that make it hard for him to do that job. The reader finds out exactly why she’s so secretive near the middle of the story. I didn’t see the twist coming, but perhaps I should have: Reaves spoiled me by usually writing about characters who only brush against the main plot of the movies. The plot gets bogged down in techobabble and labyrinthine motivations. It’s fun to see the “Eureka!” moments where Dash figures out who was triple-crossed and who was doing the triple-crossing (while serving the Empire on the side), but the myriad of motives makes the climactic battle seem unable to tie everything together.

I still couldn’t quite see past Charn being mostly an obstruction to Dash in the first half, so this is a good time to look at her from a female perspective. Bohnhoff was obliging enough to write her feelings about female characters down in blog form. On Book View Café she writes:

“Leia is still my favorite Star Wars heroine. My top three fave Leia adventures were 1) The rescue of Han Solo from Jabba’s place, 2) her nifty disposing of the dear Hutt with the ties that bind … and 3) her rescue of Han’s posterior at the shield generator on the Endor moon … one thing most of the heroines of Star Wars have in common is that they must throw themselves head first into whatever harrowing situations we writers dream up for them.”

Like these characters, Javul Charn is resourceful and attractive. The outfits and cosmetic enhancements she uses in her concerts are described in neon detail. Despite a different occupation, her fearless attitude pretty much replicates other Star Wars heroes such as Leia, Mara Jade, Ahsoka, and Jaina Solo. Unlike Jaina, however, Javul isn’t characterized well enough to have interests in many things besides the parts of her history and career that are relevant to the plot. I would have loved to see her composing a song or writing a (holo-)letter to her fans, giving a meta-fictional look at the creative process, but the story moved too fast for that. (The authors do give her a nice bit of characterization, in that she has a religion.)

Her relationship with Dash Rendar also repeats elements we’ve seen in previous Star Wars material. The novel casts Dash as Luke and Charn as Leia in a brief Han-Leia-Luke love triangle before Dash and Charn have their first kiss. There’s little reasoning behind the relationship besides both of them being purportedly attractive and in dire circumstances. The first kiss happens after a yelling match that reminded me unpleasantly of the Ben/Vestara conflict in Fate of the Jedi. She’s keeping secrets, he tells her to stop lying, she calls him cute, he says “Stop trivializing the situation!” and kisses her.

How does that stop trivializing the situation?

The scene does remind me, though, of the Han/Leia encounter in the Millennium Falcon where Han kisses Leia over her protests and she enjoys it because he’s Harrison Ford. Leia is certainly a strong female character, and your opinion may vary as to whether her portrayal in Return of the Jedi increases or diminishes that strength.

Unfortunately, the similarity to Leia doesn’t change the fact that Shadow Games is a very male-minded book. Of the two female characters besides Charn, one disappears halfway through the book and the other is Charn’s friend and manager who we see, through Dash’s eyes, primarily as an annoyance. Charn’s principal means of defense is to toss whatever coat or cloak she has on at the time. In my favorite action scene in the book, one set atop a spiraling stairway constructed high above the surface of a planet, her life is saved by two male characters. When the lights go out, the cosmetic lights in her eyes are a tactical vulnerability, and Dash holds onto her and tells her to close them until he instructs her to  open them to distract the antagonist. It was an exhilarating scene, but this idea of Charn donning impractically glowy clothing which is then controlled by a male character contains the sensationalism of slave Leia without any attached liberation. She saves the day, but not alone.

Shadow Games is a book focused around a main female character. But the majority of the cast, and the fighting-fit ones at that, are male. (Charn actually gets points in my book for not magically being a crack shot with a blaster.)  Charn acts primarily as transport for various items: she’s chased first because of a jilted lover, and second because other people want to retrieve those items. I’ll try to remain spoiler-free about the end of the book, but the bottom line is that the Dash/Charn relationship is not given the depth that, if I may speculate, fangirls want.  Whether they want it because Star Wars needs more relationships or because Star Wars needs more characterization doesn’t matter. Charn must be set aside so that Dash can continue on his adventures, her “intense silver eyes” still “one heckuva Rebellion recruitment tool”. She is also revealed as a family member of one of the main film characters, something which, in addition to heart-stopping beauty, seems to come standard with every Star Wars female. There’s a word for this in the fan fiction community.

But let’s say you’re just reading the novel for adventure instead of its points about gender. Does it succeed? Sort of. If you liked Death Star, the latter books in the Coruscant Nights series, and Shadows of the Empire, you’ll probably be happy with the action and intrigue in Shadow Games. It’s decent space adventure fare that doesn’t do anything particularly new for the Star Wars universe.