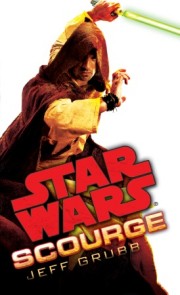 I wasn’t expecting to like Del Rey’s latest Star Wars release, Scourge by Jeff Grubb. The cover is stark: a lone Jedi, lightsaber raised, ready to strike on a plain white field.  It’s set in 19 ABY, a period I’m not particularly familiar with.

In the heart of crime ridden Hutt Space,
a Jedi scholar
searches for justice.

What it doesn’t say is that this stand-alone novel is a page-turning murder-mystery thriller. I found it hard to put the book down until I finished it.

The story starts with the violent end of Toro Irana, a new Pantoran Jedi Knight. Toro is impatient, but all Jedi Masters seem to tell their apprentices that they are impatient. Toro’s impatience, though, builds. He’s drinking heavily, becoming belligerent – suddenly, he’s frighteningly angry and violent. Very quickly and dramatically, he’s dead.

The protagonist of Scourge is an intriguing Jedi, a librarian – pardon me, an Archivist – on Yavin IV, Mander Zuma. He’s an intellectual; he’s analytical, even nerdy, for a Jedi. He’s strong in the Force and good with a lightsaber, but he thinks before he acts. When he does act his knowledge, both from study and his keen observations, gives him Thrawn-like results. He has doubts about being a Jedi – he’s told repeatedly by other characters that he’s not everyone else’s stereotype, and even he questions his own field abilities.  Mander perseveres, though, because he is driven by responsibility to the mission and, more importantly, responsibility to the Jedi who died, his own apprentice, Toro.

Mander is joined by a host of interesting characters: Toro’s sister, the brash Reen Irana, a spacer/smuggler; her mechanic partner, Eddey Be’ray, a pithy Bothan; a Corporate Sector Authority Lieutenant Commander, Angela Krin, the consummate officer; the dysfunctional Anjiliac Hutt family, including Popara, Zonnas, Mika, and Vago Gejalli; a clan of angry Rodians; and the mysterious criminal, the Spice Lord.

Reen and Angela are great female characters. They are both strong, intelligent, and resourceful, although they are polar opposites. The Hutts are fascinating, as well. Mander is drawn into the Anjiliac family when he is investigating Toro’s death, and while the Hutts remain somewhat base, and certainly calculated, they never fall into the cliché of being sordid. Mika, in particular, struggles like Mander does in defining himself: of being a Hutt, having special skills, and being the youngest child in a Hutt clan. I certainly learned a lot about Hutts that I didn’t know before!

I especially enjoyed the dialogue when Mander teams up with Reen and Eddey. It’s smart and snappy, reminding me of the dynamic of the protagonists in A New Hope.

The pacing flows well. There is plenty of action, from space battles to street fights, but Mander’s character keeps the action from overriding the plot.

The only point I raised a brow at was the extent of Mander’s knowledge – but perhaps as an Archivist, he has access to more old knowledge than the average Jedi. Still, it’s a minor point, and I found Scourge to be an entertaining read, perfect for summer like a tall drink of lemonade.