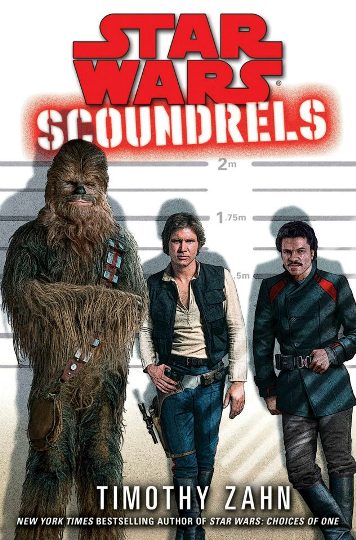 Back in June of this year, my expectations for any new Star Wars book weren’t all that high. I was really wowed by Mercy Kill, though, so when I heard Tim Zahn was writing a story starring Han Solo involving an Ocean’s 11-like caper, my expectations jumped very high — maybe too high.

It wasn’t until I was a teenager that I realized the events of the original Star Wars movie trilogy had time between them. Scoundrels is set right after A New Hope and smartly so. I really have to hand it to Zahn for not only sending Han on a different sort of adventure, but also laying within it references to Episode IV while setting up why Han would return to the Rebellion, why he and Lando are uneasy around each other in The Empire Strikes Back, and why Leia never seems to know about this particular event in his life.

Han is approached by Eanjer, a man who says the local Black Sun crime syndicate affiliate stole his family’s hundred-million-plus credits. If Han can get the money back for him, they’ll split it. As the book points out, Han’s a smuggler — not a con man or burglar. It’s something I hadn’t even considered when I got all excited over the prospect of Han Solo in Ocean’s 11. That realization made my hopes deflate slightly, and I wondered why Han would even bother with this deal. Zahn uses that point, though, to show just how desperate Han is to get his debt to Jabba repaid — again a clever move.

Han also knows he can’t do this job with just his own skill set. He assembles a team that happens to add up to 11 for the heist – or re-heist, as it were. The team is a great set of characters both known and new to the EU. They all are distinct and operating on diverse motivations. Four members of the team are women, and interesting women at that. Plus they are really good fits for the job regardless of gender.

Cat-burglar Bink and her tech-savvy twin Tavia have the strongest relationship by far of any of the characters. Those two might possibly know each other better than they know themselves, and they’d do anything for each other, too. Unfortunately, the other relationships in Scoundrels are tenuous. Part of it comes with the territory of a heist. Zerba, their super-amazing quick-change artist, even informs explosives expert Kell – as in pre-Wraith Squadron Kell Tainer – that in this business they don’t make long-term commitments. Han doesn’t even really know some of the crew. He’s hired them based on someone else’s word. But the dynamic goes beyond that. 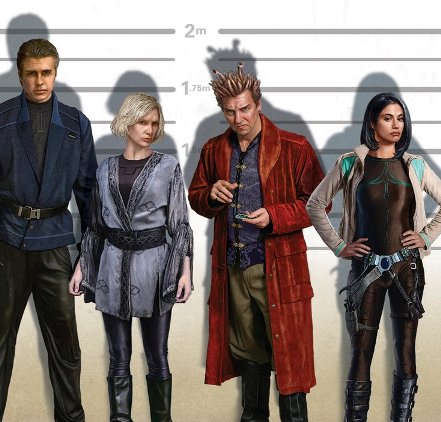 Han notes his trust of Chewie, but their bond is mostly merely a given. Han and Lando’s friendship is on the outs, and while they manage to work together Lando barely seems to tolerate Han by the book’s end. Kell and Winter know each other before the story starts, and they still know each other at the end. So while I found all these characters interesting, the weak bonds between most of them and the one-off nature of the heist group made it harder to invest in them.

There also should be some sort of warning on this book that it really isn’t a story about Han. Probably through a mix of marketing, cover art, and my hopes and dreams of more insight into the movie timeframe, I thought he’d be the one we’d be following the whole time. I thought we’d really get into his head. And while we get somewhat of a look into how he feels about what recently happened with the Princess Leia and the Rebels, and we see how he just isn’t cut out for ruthless dealings, as the book moves forward Han slides into the ensemble. This turns out to be fine in the long-run. We get to spend some time with the villains and understand their hierarchy and motivations. Some scenes with Imperial agents remind us that we’re still in the middle of the Galatic Civil War. And we really get to see the thoughts and personalities of the rest of the heist crew, which is important to the story and the success of the job.

Another thing about capers is they usually require a lot of planning and setup activities. And although I found those events intriguing in and of themselves, the pacing still felt rather slow. The good news about this structure is there are a bunch of built-in stopping places for when you want to do things like eat or sleep.

Once you hit the home stretch where the team actually goes into Sector Chief Villachor’s home to steal the credits, prepare yourself for a run all the way to the end. The last 125 pages are actually my favorite part of the whole storyline. It’s definitely a complicated play, and of course things don’t all go according to plan. As this part of the story rolls forward, it’s also where you see just how cleverly the whole book has been layered. In fact, so many things come to light at the end that when the final surprise pops up I actually thought of course. I won’t claim I saw it coming, but with the spies, switcheroos, debt-marker raising, connections, and sundry realizations, the last reveal seemed to fit right in.

This book is a fine example of the fact that there are still thousands upon thousands of stories to tell in the Star Wars universe. And it’s always refreshing to have a local adventure story instead of the fate of the galaxy at stake.

I would have liked to like Scoundrels more than I did. It had so many intriguing elements and I respect how cleverly Tim Zahn weaved this tale, but overall the book felt too flat to me. I know this won’t be the case for everyone who reads it. Scoundrels does have the bonus that you don’t have to have read any other Star Wars book to appreciate this story, but if you have read other books, they’ll be extra bits for you to indulge in, too.