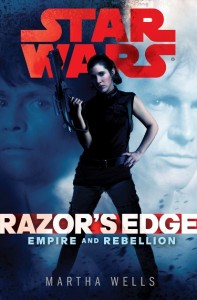 I’m relatively new to books set in between the movies of the Star Wars saga, but stories like last month’s Kenobi by John Jackson Miller and now Martha Wells’ Razor’s Edge are quickly making me a fan.

Star Wars: Empire & Rebellion: Razor’s Edge focuses on Princess Leia Organa, but it also includes classic movie characters Han Solo, Luke Skywalker, and Chewbacca as well as a whole slew of new faces. If you’ve read my bio here on FANgirl, you know I’m a huge fan of both Leia and Han. So the fact that Leia gets a majority of the page time in this book, and Han seems to be the runner-up, was really exciting for me. What’s more, Wells really has a handle on these movie characters, making it easy to believe they’d say what they say and do what they do in the book. And while the relationship between Leia and Han is by no means a primary focus of the story, it is incredibly well portrayed and great fun to read. Their romantic tension is so thick, you can only just barely see through it. I’d love to say more but I don’t want to spoil the entertainment.

I also liked the many levels of allegiance and reliability at play. Leia’s current Rebel mission involves meeting with a merchant group whose dependability is not really a known quantity in order to garner supplies for the planned Echo Base. Leia herself is soon experiencing a split allegiance between the Rebellion and a group of fellow Alderaan survivors from the Aegis who aren’t part of the Rebellion, don’t seem to want to be, and may have committed acts Leia would definitely never condone. She wants to do what’s right, but there certainly isn’t an existing rulebook for her situation. Despite her technical and emotional bond with Captain Metara and the rest of the Aegis crew, uncertainty exists as to how far Leia, or anyone else for that matter, can trust them.

On top of that conundrum there’s a traitor in the Rebellion and Han still isn’t sure he really wants to be part of the cause. The Aegis crew also comes attached to their own villain, Aral tukor Viest – a ruthless and intriguing despot controlling a pirating clearinghouse. Viest’s establishment as a Lorddian brings skills to play that put Leia at an advantage for understanding and a disadvantage for being unable to communicate the information with the rest of her group. Other pirating groups within the clearinghouse provide more unease – and looming in the background, ready to step in at any moment and cause our heroes even more trouble, is the Empire.

Even with all this great interplay and potential, I found roughly the first half of the book to be a little slow and full of me getting frustrated with Leia. Additionally, I had trouble keeping straight which name belonged to which character. Among the good guys and potential good guys several of the characters weren’t easily distinguishable from each other. But once things get going, it’s a much more interesting and exciting pace and characters acting in smaller groups helped eventually sort out who was who.

Overall Razor’s Edge felt similar in tone to the Star Wars films and provided development of the growth and struggles that happened for Leia between A New Hope and The Empire Strikes Back personally, in some of her relationships, and within the Rebellion. She’s a determined leader, a mourning survivor, and ultimately a believer in hope and good. Furthermore, Leia’s not alone. We get to see other women in leadership positions, as well, with differing points of view. And the best part of that is how organic it is; no one within the story thinks it is a big deal.