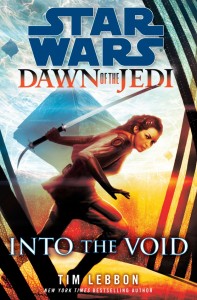 Dawn of the Jedi: Into the Void is the latest standalone novel from Del Rey. Based on the Dark Horse comic series by John Ostrander and Jan Duursema, the story is set 25,793 years before A New Hope. It’s also the Star Wars Expanded Universe debut of Tim Lebbon, known for his work in horror and dark fantasy.

In this setting, all Force-sensitives had been brought to the planet Tython about ten thousand years earlier, where a Je’daii Order was established. These Je’daii use hand-forged blades, not lightsabers. They are not divided into dark or light users; they strive for a balance between the two sides of the Force. The Je’daii maintain order in the Tython system by a fear-based respect of their powers. They do not feel that they need to explain their actions or follow the rules that apply to non-Force-users.

The story centers around a female protagonist, a 6’2”, auburn-haired young Je’daii Ranger named Lanoree Brock. The life of a Ranger is a solitary one, and Lanoree is presented as a particularly independent one. Her ship is modified to suit her, and she and her astromech are its only occupants. Lanoree disdains other Rangers who visit Tython too often.

Lanoree is charged by the Je’daii Council with stopping a cult leader from opening a hypergate on Tython with the use of Dark Matter and possibly destroying the whole solar system. The twist is that the cult leader is Lanoree’s younger brother, Dalien, who resents Force-users and hates the Je’daii – and whom Lanoree believes she allowed to die in an accident.

The story is told by alternating the present with flashbacks to her brother’s failed initiation as a Je’daii. The flashbacks are interesting, detailing the initiation journey across Tython from Je’daii temple to temple, a trip all prospective Je’daii must survive. This era’s Tython is very different from Tython I was familiar with from The Old Republic era(3,653 BBY). Like the book’s Je’daii, it is much rougher and wilder.

In the flashbacks, Lanoree lives in a constant state of worry and denial about her brother’s increasing hostile and erratic behavior. In the present, Lanoree is pushed out of her comfortable solitude, forced to work with a three-lekkued Twi’lek, Tre Sana, a former thug with a shady past he is trying to leave.

The story is engaging. Despite the inherent danger of being set in the remote past (as we know, Tython survives), I still wanted to know what happened in the end. A few times I wondered if I should have read the comics first, because I wasn’t sure if I understood some of the nuances. The energy of the story is even and well paced throughout. The book has enough characters to keep the story interesting, but not so many that it’s confusing, although most of the other characters are treated fairly superficially.

The novel has a gothic feel. Lanoree, with the approval of her Jedi master, is in the middle of an “alchemical” experiment. It builds up with slow, brooding expectation, although its revelation, while repulsive, is not revolting. For me, though, the book lacked the elements I most enjoy in Star Wars novels: the clear zones of good vs. evil, lighthearted camaraderie and moments of levity.

Ultimately I found Lanoree hard to connect with. She is not particularly sympathetic in the arrogant way she treats others she considers inferior, even her companion Tre Sana. I’m close to my younger brother, but Lanoree’s refusal to see her brother realistically was hard to find believable. Lanoree professes to feel bad for those she injures or kills in the line of duty, but her actions make the sentiment feel inauthentic.

Dawn of the Jedi:Into the Void is a well written, well edited story. It’s a good read, especially if your preference is for the darker spectrum of emotion. The novel won’t be quite as appealing to fans who prefer their Star Wars brighter and lighter.